The fastest bike in the 2015 Tour de France?
by David Arthur @davearthur

Is this going to be the fastest bike in the Tour de France? If Mark Cavendish is in good form, which by all accounts he is, then that is very likely. The bike is, of course, the brand new Specialized Venge, unveiled to the world last week, but today was the first chance we had of seeing it with our own eyes. And it cuts a sharp figure in the intense Utrecht sunshine. 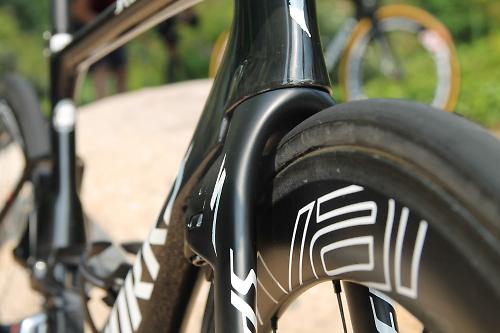 The original Venge was introduced back in 2011, and was the US company’s first aero road bike. It's stood the test of time well - Mark Cavendish has won too many races to list here on it. Aerodynamic bicycle design has moved on a lot since the Venge was first launched, it was time for an update, and Specialized didn't hold back, unleashing a radically overhauled replacement. The company has boldly aimed at making it as fast as the Shiv time trial bike, a lofty ambition indeed. 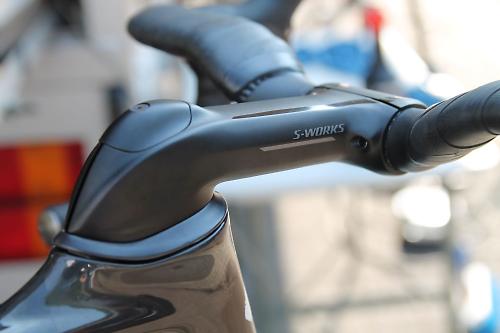 The icebreaker with this new bike are its brakes. They’re like nothing we’ve seen before. For sure, plenty of manufacturers have integrated brakes directly into the frame and fork, Ridley’s Noah Fast is one example and the BMC TimeMachine is another. 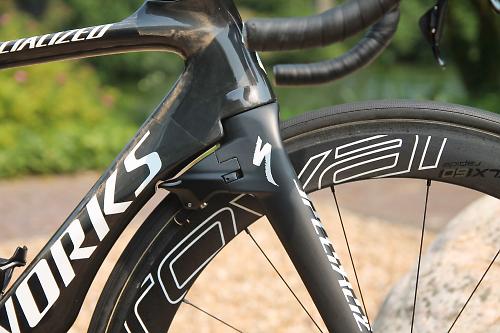 But with the Venge it’s not just the proprietary brake calipers, but also the positioning, that makes it such a departure from everything we've seen before. The shape of the calipers, and their location, is claimed to produce zero drag. That’s not all, the position of each brake caliper is deemed to be where wheel deflection is apparently at its lowest, and that eliminates brake rub. Sprinters typically release their brake calipers in a sprint to avoid brake rub when the frame and wheels flex under the extreme power that a world class sprinter can exert. I asked the team mechanic if they were a pain to set up and he replied that they were a doddle. He would say that though, of course. But I hung around and watched him making some adjustments to the cable tension, and to be fair it did appear to be fairly straightforward, but he was making life easier with this cable stretcher tool, sometimes known as a “fourth hand”. There is always going to be a downside to such extreme packaging of the components and cables, though, and it's certainly not going to be as quick to build or repair a cable as a regular bike, but that's missing the point of an aero road bike. 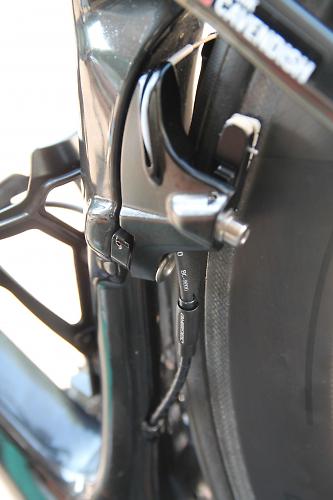 Moving away from the brakes, the handlebar and stem are the other part of the bike that turns heads. Specialized has sought to keep the gear and brake cables hidden inside the handlebar and stem, routing the cables through the stem and into the frame using specially designed steerer tube spacers. The only cables you can see outside of the frame are at the rear brake, with this short section of exposed outer, but it’s likely to be in an area that won’t negatively impact the aerodynamics. What’s going on with the riser bar, you’re probably wondering. To achieve the best aerodynamics, Specialized has developed the stem with a -17 degree rise and then offers two handlebars for the rider to get the desired fit, with the 25mm rise bar shown, or a flat option. What Specialized is attempting to do is force the rider into an aggressive and low position, to minimise drag caused by the rider. With the rider accounting for about 80 per cent of the overall air resistance, this makes a lot of sense - simply hunkering down on the bar makes a massive difference to the power output required to maintain any given speed. Specialized has developed its own computer mount, and it appears to have a sliding mechanism so it can presumably accommodate different sized computers and probably even different computers complete. Cavendish was using an Edge 801, in case you’re wondering. Tony Martin was using the older Edge 500, obviously preferring its compact design. While Specialized has developed the handlebar mount to also be compatible with the Shimano Di2 junction box, the Quickstep team have instead positioned it rather neatly underneath the saddle, where it’s well out of the wind.

The other big talking point with Mark Cavendish’s bike is, of course, that he’s back on a Shimano Dura-Ace chainset, following the chain-dropping incidents with an FSA chainset earlier in the season. Quickstep isn’t actually sponsored by Shimano, it buys its equipment, and this year switched to Shimano and FSA, with the latter supplying brakes, chainsets and wheels through its Vision label. One source told road.cc the reason for the chain dropping was because the power exerted by Cavendish caused sufficient flex in both the chainset and frame to unship the chain from the chainring. We can't confirm that, of course, but it's an interesting viewpoint on the cause of the dropped chains.

FSA is also supplying the team with its Vision wheels, but I only spotted Vision wheels on the Shiv time trial bikes, the rest of the Specialized road bikes appeared to be rolling on Specialized's own Roval wheels. Cavendish’s bike is fitted with a pair of CLX60 Rapide carbon fibre tubulars. 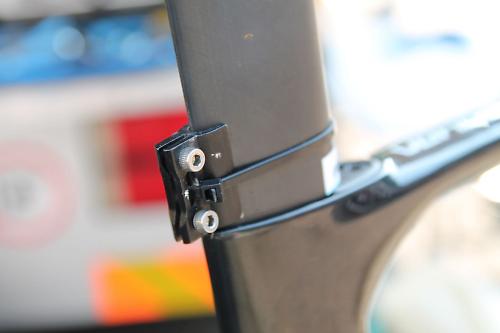 The number goes here. Good old zip ties still needed even on a state-of-the-art race bike. Surely there must be a better solution than this? 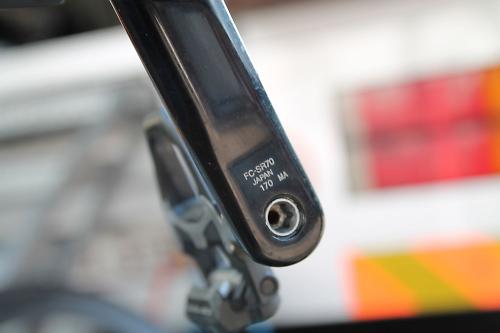 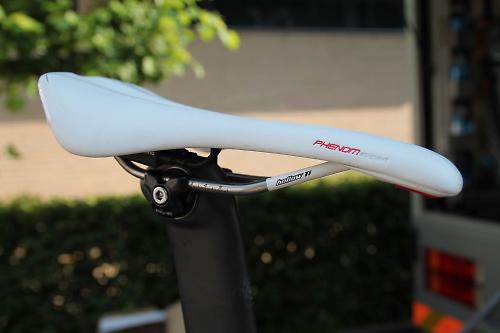 He also has his saddle pushed really far forward on the rails. 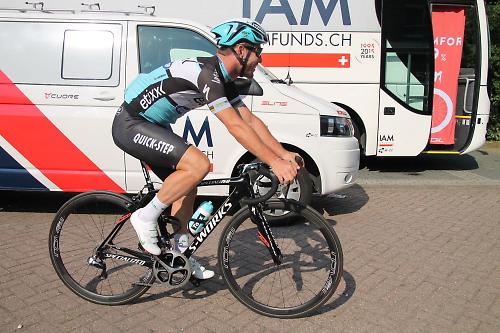 Mark Cavendish wasn't riding the Venge today. Instead, he took his Roubaix out for a spin, as did most of the team, to give it a shakedown and make sure everything is set up correctly. 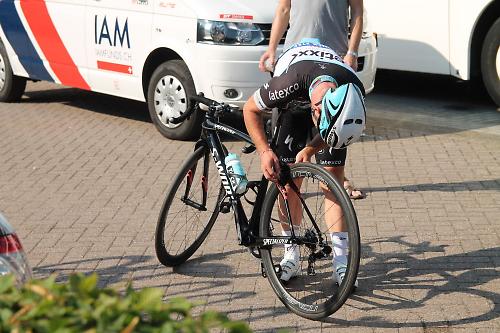 And it wasn't. Cavendish stopped shortly after hopping on the bike to make some adjustments himself. 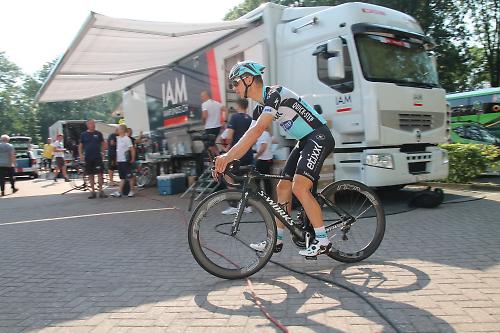 The new Venge has obviously generated a lot of interest since it was launched. Tony Martin jumped aboard Cavendish's Venge and took it for a blast around the hotel car park, which was quite a sight as it's way too small for him.