Trek has launched a new 9 Series of Madone road bikes that boasts what the brand describes as ‘unparalleled aerodynamics’ along with the tube-within-a-tube IsoSpeed system first developed for the Domane for increased comfort. 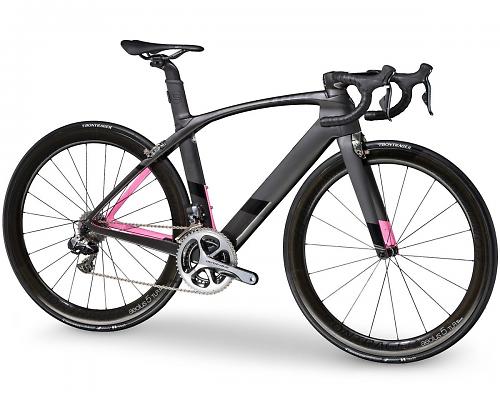 The finished product is a radical-looking design with an amazing amount of integration. It has been raced by Trek Factory Racing in the Critérium du Dauphiné and will see extensive use in the forthcoming Tour de France.

There’s a lot of new technology here, so buckle yourself in.

Cast your eye over the new Madone and you’ll notice several obvious features designed to improve the aerodynamic efficiency. The direct-mount centre-pull front brake, for example, is integrated into the fork, the bar and stem are a one-piece arrangement, and there’s a ‘Control Centre’ on the down tube that houses either a barrel adjuster for the front mech of a mechanical setup or the battery and junction box of a Shimano Di2 electronic shift system. 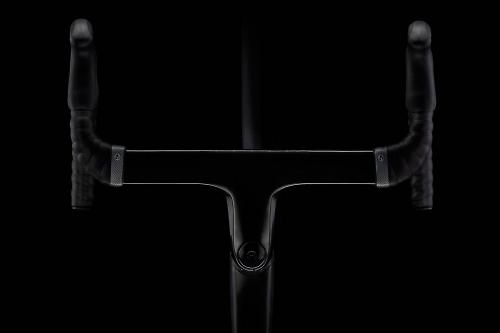 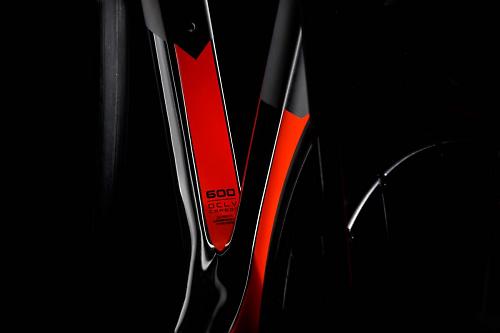 The redesigned front brake and fork, for example, are intended to ensure continuous airflow towards the down tube. The new handlebar/stem combo hides the cables completely in that area so there’s no cable drag, and its smooth profile is designed to keep the air moving efficiently. 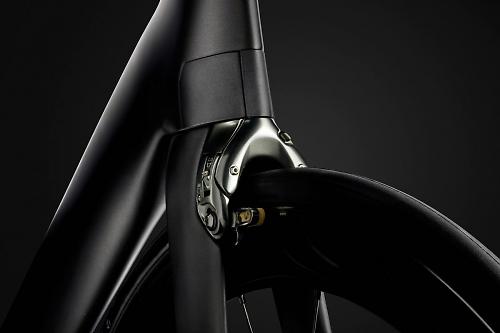 The water bottles have been sited to minimise drag with the one on the seat tube positioned as low as possible, and Trek says that even the 3S chain keeper (the little device that stops the chain coming off the inner chainring) has been designed with aerodynamics in mind.

Trek says that with water bottles in place, the average drag of the new Madone across a range of yaw angles from 0-20° (in each direction) is lower than that of the Cervélo S5, the Giant Propel and the Felt AR. The engineers say that the Specialized Venge is not a competitor in terms of aerodynamics (although a new Venge has been announced very recently that Specialized says is considerably more aerodynamically efficient than previously).

Trek’s data says that the S5 is more aerodynamically efficient when the apparent wind is at 0-5°, but that the Madone takes over at higher yaw angles.

Many brands have been pushing integration over recent years as a means of improving the aerodynamic performance of their bikes, but Trek have gone further than ever before with the new Madone.

Check out the front end that Trek says is critical to the bike’s overall aerodynamic performance. 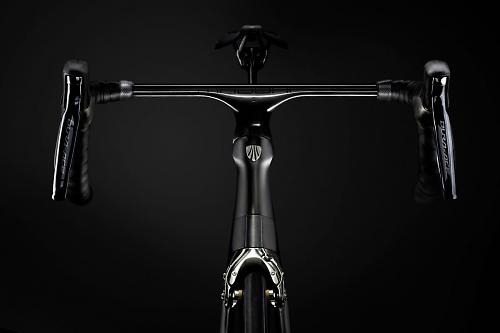 The crown and legs of the KVF-profiled fork are notched so that the proprietary centre-pull front brake can integrate with it, and the brake cable is fully internal, routed down the front of the steer tube and through the head tube. The fork steerer tube is proprietary as well, shaped to allow that internal routing.

The rear brake is in a traditional position on the seatstays (higher end models of the last Madone design had a chainstay-mounted brake, but Trek has re-sited it for convenience), and like the front brake it’s a centre-pull design, the cable passing through the top tube with a stop at the seat tube.

Both brakes have quick release levers – they’re more tabs, really – that you flip open to provide the clearance you need to get wheels on and off.

You get independent spring tension adjustment screws on each brake arm to centre the brake pads, and two more screws allow you to adjust the pads as they wear. 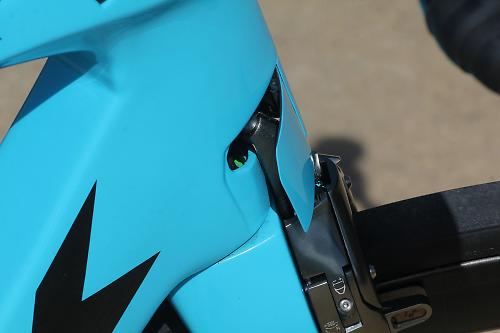 Those strange-looking flaps at the bottom of the head tube are called Vector Wings and they’re designed to protect the brake from the elements. They flip open when you turn the wheel very sharply, providing more clearance for the brake.

The combined handlebar/stem is made to Trek’s existing KVF tube shaping. In order to keep the cables fully internal through the head tube, Trek uses an integrated headset top cap and the spacers. It’s designed for performance rather than appearance but it does look very, very cool.

Those spacers are a two-piece clamshell design that you can add or remove without the need to re-route any cables. 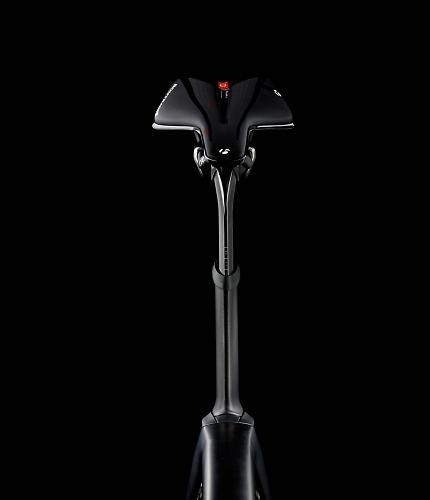 The seatpost is KVF-profiled too, with a head that allows infinite tilt and setback adjustment. You get snap-on rear reflector and light brackets.

The new Madone also features a very neat little device on the down tube that Trek calls the ‘Control Centre' (well, it’s actually called a ‘Control Center’ because Trek is American). This allows you to make gear adjustments.

It houses the front derailleur adjustment dial on bikes with mechanical setups, and it’s where the Di2 battery and junction box live on bikes with electronic gears (it is not compatible with Campagnolo EPS). You get access to the trim button through a window in the top. A one-tab release exposes the charging port.

It’s about time more brands started hiding that Di2 junction box. Look, for example, squirrels it away at the front of the top tube on its 795, but most other brands still leave it exposed.

The potential downside to all this integration if you’re a perennial component tinkerer is that in certain areas you’ll be limited to Trek/Bontrager kit for the whole of the bike’s lifetime.

Trek has taken the IsoSpeed technology that it developed for the Domane and incorporated it into the Madone for the first time.

In brief, IsoSpeed is a "decoupler that isolates the movement of the seat tube from the rest of the frame". It’s easiest if you just watch the video:

Check out our review of the Trek Domane 2.0 to see what we thought of IsoSpeed in action.

For the Madone, Trek uses an aero outer tube shape with a tube inside that’s fixed in place only at one point: just above the bottom bracket. The inside tube is free to flex as you ride. Trek claims the result is 57.5 per cent more vertical compliance than the Madone’s nearest competitor, the Giant Propel. 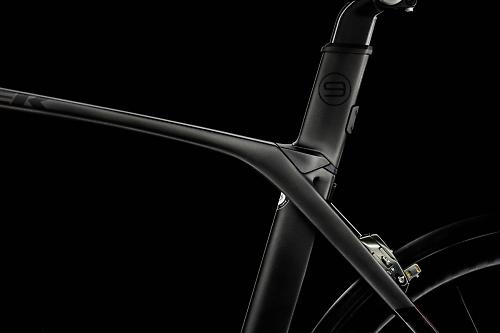 Trek began developing this version of the Madone way back in October 2011 and it has been through 48 CAD models and three production frame iterations.

Following extensive in-house testing of several kinds, the Madone prototype was ridden by Trek Factory Racing from January 2014 and feedback from the team was used to decide upon the laminate structure of the production bike.

Here's a little video we did to show some of the Madone's key features:

The new Madone 9 Series will be available in four different versions, the range including models in Trek’s H1 (low and aggressive) and H2 (slightly more relaxed) fits, and also a WSD (Women’s Specific Design) model.

The Race Shop Limited (main pic at top of page), in an H1 fit, will be priced at £9,750. This model comes with a Shimano Dura-Ace Di2 groupset and Bontrager Aeolus 5 wheels. 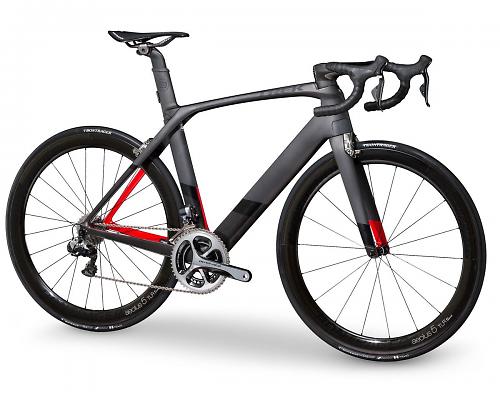 The Madone 9.9 (above), with the same groupset and wheels, will be priced at £9,000. It will come in both H2 and WSD versions. Why the price difference from the Race Shop Limited version? Trek uses its 600 Series carbon here rather than the 700 Series, and it charges a premium for the Race Shop Limited program. 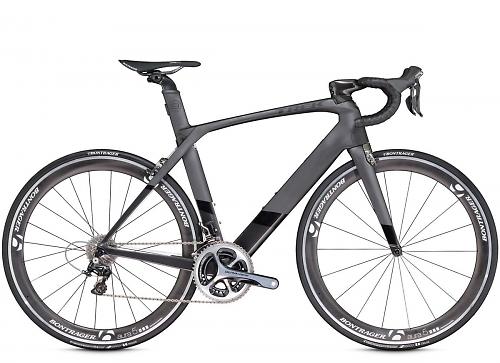 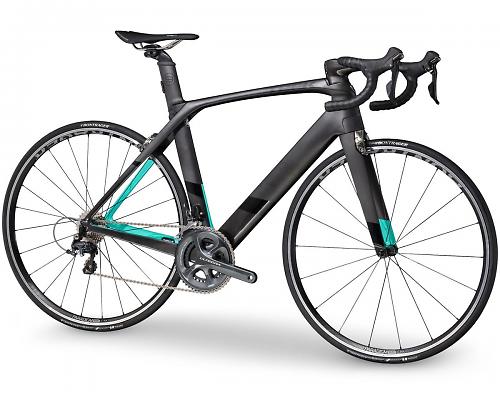 You can also get the new Madone through Trek’s Project One scheme where you can choose your own components and paint job. 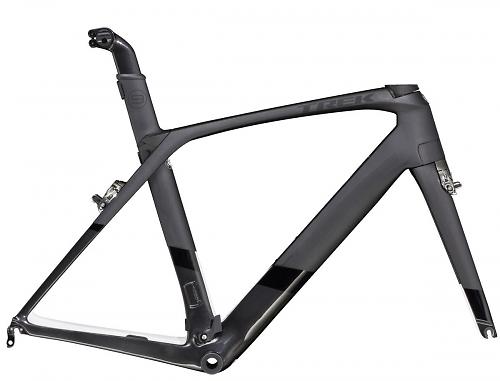 Models come fitted with 25mm tyres although there is space for 28s. Despite what you might have been expecting, there is no disc version.

We don’t have the timings on UK availability yet.

We have already ridden the new 9 Series Madone. Check out our First Ride to find out what we think.