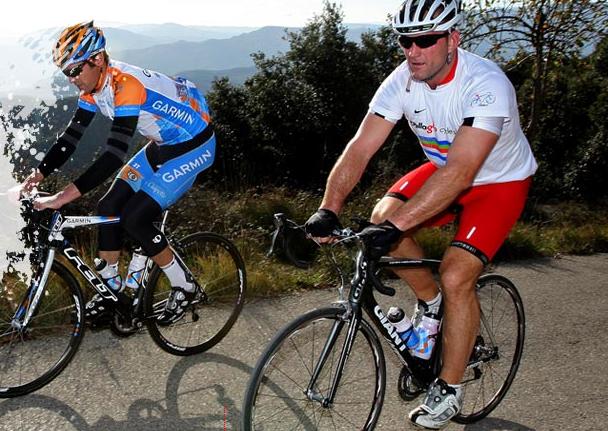 Lawrence Dallaglio's charity bike ride from Italy to Scotland, taking in all the stadiums of the Six Nations championship, is finally over.

The former England rugby star cycled into Edinburgh's Murrayfield Stadium yesterday, exactly one month and 2,888km after setting off from Rome.

"We have had fantastic support along the way with some great people joining us including the likes of Andrew Flintoff, Michael Vaughan and Will Greenwood. We're just short of our final target of £1m and need your help.

"We have done our bit, so I urge the public to donate and help us reach £1m for Sport Relief and the Dallaglio Foundation."

Former England footballer Dixon, who cycled more than half the ride, told the BBC: "I am exhausted. I felt pretty ill when we arrived back on English soil last week but I was delighted to rejoin the team again and support Lawrence over the finish line.

"I think Lawrence and all the other cyclists have done brilliantly to get this far, it has been a huge effort and they all deserve a rest."

The cyclists left an icy Rome on 12 February, the first time the city had seen snow in more than 25 years. Dallaglio navigated the cyclists through northern Italy and the south of France before arriving at the Stade de France in Paris on 22 February.

The riders hit familiar English roads two days later as they embarked on the leg to Twickenham where they were greeted by Prince Harry, before continuing to the Millennium Stadium in Cardiff, Croke Park in Dublin and finally Murrayfield on Friday.