Subscribe
Back to news
news
Art and design
Campaigning
Urban A planned skyscraper that will be the tallest in the City of London will have 1,500 secure cycle parking spaces. Developers are also introducing a phased delivery plan to minimise the movements of heavy vehicles during the daytime and improve the safety of cyclists – although campaigners are urging them to use ‘direct vision’ lorries that give drivers better visibility.

22 Bishopsgate will tower 62 storeys above the junction with Threadneedle Street in the heart of the Square Mile, and will have a further three storeys underground. It will occupy the site once earmarked for The Pinnacle development, where construction ceased in 2011 leaving a nine-storey concrete core nicknamed ‘The Stump.’

An application for planning permission will be submitted next month, with construction likely to start in 2016.

The building, designed by Karen Cook of PLP Partners and being developed by Lipton Rogers on behalf of a consortium led by AXA Real Estate, is described on its website as being “big on bikes” and “low on trucking.”

The developers say it “will set new standards in promoting cycling, providing a parking facility on site for over 1,500 bikes and over 100 showers, along with hire, repairs, sales, safety training, spinning classes, laundry and drying facilities.”

They add that the development “aims to be the first building in London to adopt the new Delos WELL Building Standard … the world’s first building standard focused exclusively on human health and wellness and assesses people using the building to measure, certify and monitor features that impact health and wellbeing.”

The skyscraper is also billed as “the first major office building in London to use an off-site consolidated delivery centre to minimise vehicle movements to the site,” aimed at “reducing pollution, improving security and diminishing the number of cyclist accidents with HGVs.”

This graph, from the 22 Bishopsgate website, shows how that translates into vehicle movements throughout a 24-hour cycle compared to a standard delivery profile. The delivery plan will be in place both while the building is under construction and once it is occupied following completion, planned for 2019. 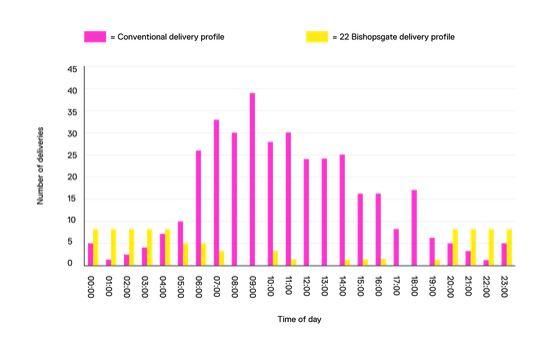 According to the developers, “Supplies to and waste from the building will be delivered to a consolidation centre outside central London and energy efficient vehicles will then make far fewer deliveries to the site outside peak pedestrian movement and rush hour times.”

While both the provision of facilities for cyclists and the phased delivery plan are welcomed by campaigners – Peter Murray, chairman of New London Architecture said on Twitter it was an “excellent strategy for consolidation of deliveries and reducing van movements” – on such a major construction project it is impossible to remove risk entirely.

Last year, it emerged that lorries removing waste from tunnelling on the Crossrail project at Liverpool Street station, further north along Bishopsgate, had been involved in the deaths of two London cyclists, Maria Karsa and Brian Holt.

In both cases, the victims were riding to begin their shifts at hospitals in East London, and the collision that claimed the life of nursing assistant Ms Karsa was outside standard working hours, shortly before 8am on a Sunday morning.

Rosie Downes, campaigns manager at London Cycling Campaign, told road.cc: “We welcome the ambition by 22 Bishopsgate to both encourage cycling and reduce road danger, though restrictions on lorry movements, while welcome, are only a part of the solution.

“In addition to the consolidated delivery plan, we’d urge the developers to ensure that only ‘direct vision’ lorries are used during construction.

“These lorries, similar in design to that seen on most modern refuse trucks in London, are now available for construction use.

“They give the driver a much better view of pedestrians and cyclists near their vehicle – no matter what time of day or night they’re travelling.

“It will also be essential for 22 Bishopsgate to prioritise safe passage for cyclists and pedestrians at access points to and from the site, and monitor this to ensure there’s no risk to vulnerable road users.” 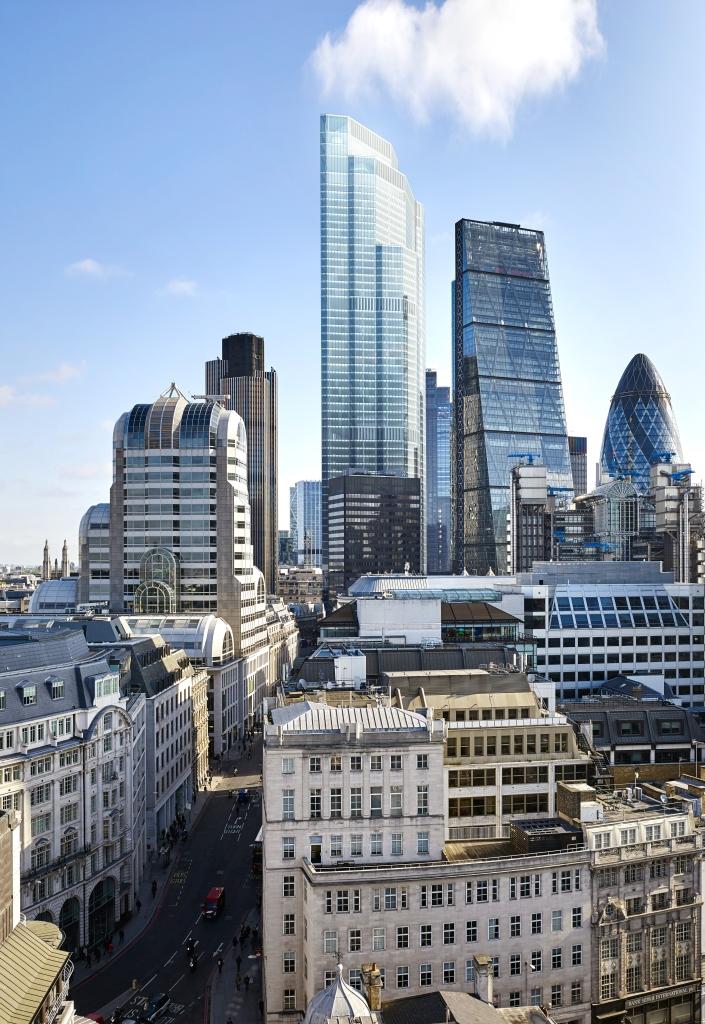 Sir Stuart Lipton of Lipton Rogers said:  “22 Bishopsgate will represent an elegant addition to the City of London at the heart of the cluster of tall buildings.

“Technically advanced with care for people at the heart of its strategy and taking new ways of working as its essence, the building will assist personnel to feel motivated and earn its place as the finest working environment in Europe with wellbeing and a range of social facilities that make the work experience less stressful, as well as more uplifting and efficient.”

Anne Kavanagh, AXA Real Estate’s global head of asset management and transactions, added: "As with our other projects, 22 Bishopsgate has an underlying commitment to create a sustainable building environmentally, socially and economically.

“This investment is being made for the long term and – along with public and private investment into the local transport and infrastructure – we believe will continue to strengthen central London’s position as an international business location.”

An exhibition of the proposed development is open to the public on-site this week from 12-2pm and 4-8pm until Friday 19 June and from 10am-4pm on Saturday 20 June.