Felt have launched the new V Series range of adventure road bikes for 2016, with drop and flat bar bikes based around an aluminium frame with a more relaxed geometry than their endurance road bikes, and equipped with disc brakes, rack and mudguard eyelets and space for up to 40mm tyres.

Gravel and adventure bikes are big news at the moment with plenty of manufacturers taking inspiration from the popular gravel racing scene in the US. You should have a read of our recent gravel and adventure road bike buyer’s guide to find out more about what sets these bikes apart from road and cyclo-cross bikes, and what to look for if you’re considering one.

"The V is a performance adventure bike that is not afraid of a little gravel," say Felt. "With a slightly longer wheelbase, rugged components and wheels, and either a flat or traditional dropped bar, the V is the ideal road bike for anybody not looking for a traditional one. Be it an epic cycling adventure or continuing the ride where the road ends and dirt begins, the V is on point."

Compared with Felt's cyclo-cross models and Z Series endurance road bikes, the V Series has a much more relaxed frame geometry. The bottom bracket is 1cm lower, it has a longer wheelbase, taller head tube and slacker head angle. The V Series is intended to appeal to a broader range of cyclists, with a lot more versatility on offer than Felt's race-ready cyclo-cross bikes, and the Z Series endurance road bikes can't match the new V Series for tyre clearance. 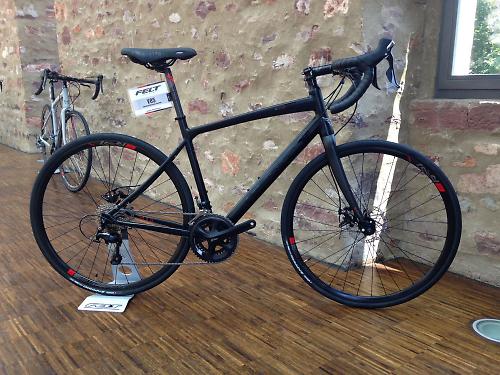 The new model uses an aluminium frame across the range - there’s no carbon version yet, though there’s likely to be one in the future. The top tube is dramatically sloped, to provide generous standover clearance, useful when chucking the bike around technical trails, and for a greater amount of seatpost extension, which with a carbon fibre 27.2mm diameter post, should mean a good deal of deflection.

Continuing the comfort theme, Felt have shaped and curved the seat stays to provide additional compliance. The carbon fibre fork, as well as having a longer axle-to-crown measurement than a cyclo-cross fork to provide extra tyre clearance, has curved blades to provide a degree of compliance up front. All cables are internally routed and Felt have given the new bike a 68mm English threaded external bottom bracket. And, of course, there are eyelets for mudguards and racks. 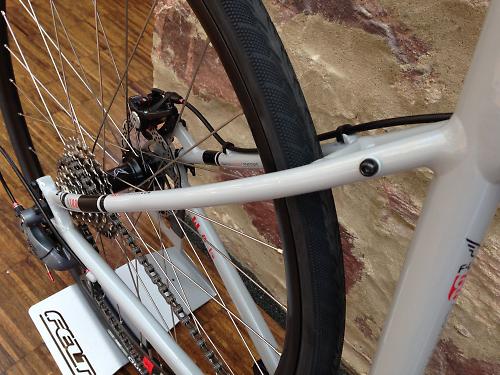 "Versatility is the key with this bike, it’s designed for mixed surface riding, to go anywhere,” Felt tell us. To that end, production bikes will come with either 28 or 32mm tyres, but there’s space for up to a 40mm tyre. That tyre size will decrease when you factor in a full-length mudguards, but it’s still far more space than you get from an endurance road bike. It’s enough to provide a wide range of tyre choices to suit any terrain or style of riding you want to use the bike for.

Like most manufacturers adding disc brakes to road bikes, Felt have stuck with conventional quick release axles rather than the thru-axles we’re starting to see feed into the road world from mountain biking. Felt road product manager Dave Koesel told us this was down to simplicity and component availability, but he did let on that he fully expects to see thru-axles become standard on disc-equipped road bikes. 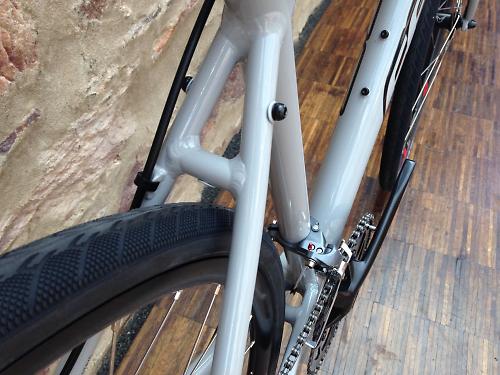 Why do we need thru-axles at all, you might be wondering. Here’s a good example. Felt have developed a new fork for their top-end cyclo-cross bike with a 15mm thru-axle. At 400g it's lighter than the previous version, a weight saving that's been achieved because, unlike the previous version which had solid carbon lower legs, the use of a thru-axle has allowed Felt to develop a fork with completely hollow legs. As well as reducing weight, Felt have also been able to factor in more compliance for a smoother ride. So less weight and more comfort, at least according to Felt, appears to be a good enough reason to go with thru-axles.

The V Series will be offered in three builds, starting with the V100 at £699, the V85 pictured above at £1,175, and the V55 costing £1,750. No pictures of the V55 because it wasn’t shown at Felt’s press launch. That bike will come with Shimano’s Ultegra mechanical groupset with hydraulic R685 disc brakes. The V85 above comes with Shimano 105 and TRP Spyre mechanical disc brakes. The V100 gets a Shimano Claris groupset with an FSA chainset. Tyres will be Vittoria Zaffiro in 28 or 32mm width. We'll have full details of the bike specifications soon.

Both the V100 and V85 have additional cyclo-cross-style brake levers, and if you’re looking at that saddle and thinking 'What the?' don’t worry, Felt tell us they’ll be speccing a regular road saddle instead of the gel-padded job pictured on the bikes here.

I got to have a very brief ride on the V85, about 20km around the roads on the outskirts of Wiesbaden, in Germany. I know that’s not very far, and I would have loved to have ridden for longer, but there was a tight schedule to stick to and we had a flight to catch.

Obviously that’s not enough time to form much of a verdict, but it did offer an insight into how the bike rides. The roads in this part of Germany are pretty darn smooth, but I did manage to find a few potholes and some decent stretches of gravel at the side of the road to put it through its paces. It's all part of the service we provide. 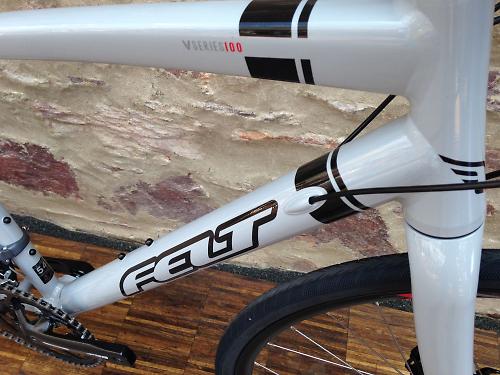 The first thing I noticed was how easy it feels to ride. It’s a very relaxed bike with quite slow steering, meaning the bike feels very planted at any speed. It's clearly not the sort of bike that offers a highly sensitive and flickable front end, but when you get onto the loose gravel that's the last thing you want. I was riding a bike with 28mm tyres so not exactly a full-on gravel spec.

The position is comfortable, quite high but not too high at the front, and the short top tube keeps the fit compact without being cramped. I would have liked a longer stem to stretch out the reach a bit more. I didn't get on with the gel saddle, but as I've said, we've been told production bikes will have a regular (firm) saddle.

It’s clearly a smooth riding bike, the tyres going a long way to isolating the rider from the road surface, but not so much that it feels soft. There’s a definite sense of stiffness from the frame and fork - give it the beans up a few climbs and it gives chase well. 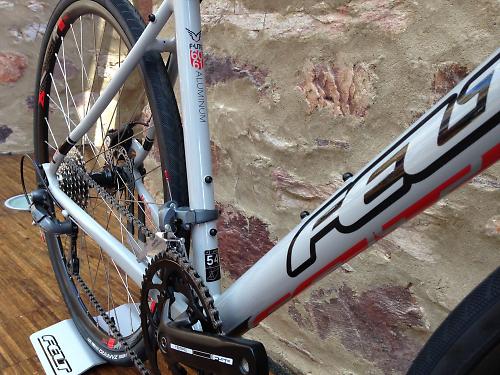 Get it on the loose stuff and it feels perfectly stable and settled. The long wheelbase and slack head angle ensure it’s not easily knocked off line and the handlebar doesn’t twitch about as the front wheel scrabbles for grip over rocks and stones. Out of the saddle on the climbs it shows good ascending prowess, and down the other side it feels perfectly balanced.

I’ve been riding GT’s aluminium Grade recently (review coming soon) and there’s a close similarity to the way the two bikes ride. They’re surprisingly smooth considering the aluminium frame material, and the high-ish weight is masked well under a blanket of velvety smoothness. 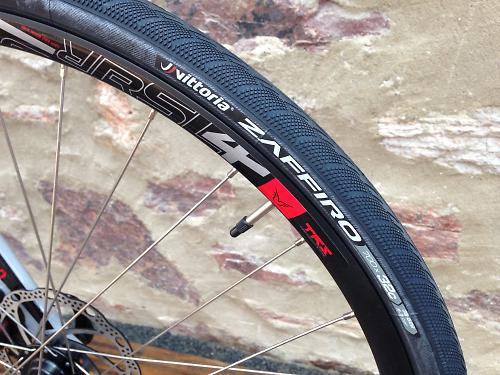 Based on this first ride, Felt have achieved the goals they set out in developing this new bike, and it compares favourably against another slightly more established rival in this gravel and adventure road bike category. Felt appear to have created a bike that will suit many UK non-racing cyclists wanting a versatile and rugged workhorse, as well as appealing to beginners, commuters and sportive cyclists.

With the V Series range of bikes becoming available in just over a month, I’ll be putting my name down for a longer-term test to really put it through its paces.