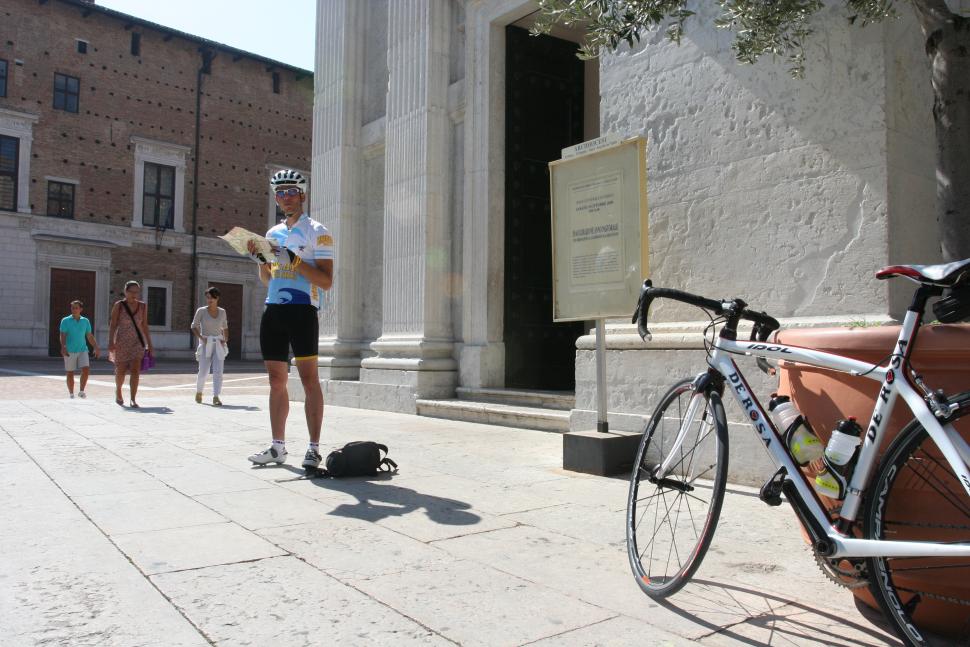 And at the other end, bike-friendly hotel has packages for La Pantanissima, the Nove Colli and more
by Simon_MacMichael

You may remember our Wish You Were Here?  Italian road trip last September. Well, our friends at the Belvedere Bike Hotel, which was the base for some fine riding and some fine eating too, have been in touch to tell us about some top Gran Fondo rides coming up in the area, which is now easier to reach than ever thanks to new flights from the UK.

The hotel is in Riccione, Emilia Romagna, a couple of kilometres down the Adriatic coast from the resort of Rimini, whose airport will be served from 28 March by a new Ryanair route from Liverpool, supplementing existing flights from Stansted and Bristol, and a summer-only service from East Midlands Airport.

As long as its packed away in a bike box or bag, the airline will carry your pride and joy for £40 each way if booked online, although if you want to leave your ride at home, you can always do as we did and hire a De Rosa from the hotel itself – you can’t beat the feeling of riding a classic Italian bike along some of the roads that have inspired many of the country’s great cyclists.

Those include the late Marco Pantani, who died in Rimini six years ago last month and whose home town, Cesenatico, is a little further up the coast. Il Pirata is commemorated not just by a museum in Cesenatico, but also by a Gran Fondo – Italian for sportive – ride, the Pantanissima, which takes place this year on 13 September. The ride offers two routes – one of 106km and another of 151km – taking in some of the ascents where Pantani began honing his climbing skills.

This will be the third edition of the event, which was created by Pantani’s mother, Tonina, and last year the Belvedere won the prize for the largest team entered, with 20 guests taking part. It’s looking to top that figure this year, and says that although it is on a smaller scale than some other events, “the atmosphere is no less than that of any of the other Gran Fondos and the emotion behind it is really something special due to the active participation and organisation of Marco's family.”

Another Gran Fondo that takes place nearby is the longer established Nove Colli – if you have a smattering of Italian, you’ll know that translates as ‘nine cols,’ and it pretty much does what it says on the tin. This year, the event takes place on 23 May, its 40th edition, and the Belvedere has reserved places for its guests as part as a comprehensive package that leaves you free to concentrate on getting up and down those hills while you’re on your bike, and La Dolce Vita when you’re off it (trivia corner - the film's director, Federico Fellini, was born in Rimini, and gives his name to the town's airport).

If you’re itching to escape the British winter and can’t wait till May or September to get some riding in among the stunning Italian countryside, places are still available on the hotel’s local event, the Eurobike Vredestein Gran Fondo, which starts and finishes in Riccione itself, with both its longer and shorter routes including a diversion into the mountain republic of San Marino. That takes place on 28 March, so there’s little time to lose if you fancy taking part.

The hotel website includes a calendar of other events taking place in the area, although of course if you just want to ride at your own pace without being tied down to a specific event, you can stay at the hotel, which has 45 rooms plus five junior suites together with a swimming pool and sun terrace, year-round.