If Carlsberg did bike tours they would be like this, except the beer wouldn't be as good

It's Sunday and we're off to the Milan bike show, followed by a few days riding around the Emilia Romagna a few hundred miles to the south. On the plane from Bristol the bloke sitting across the aisle from me has the unmistakeable look of someone that rides a bike for a living. I'm not wrong, David McCann is on his way to to the world championships where he's riding the TT for Ireland, after that he'll be looking for a new team as the Aussie outfit he rode for this season is folding he hopes to find something closer to home.

Dave is riding a Giant time trial bike, used by Once in their last Tour, he tells me that at one worlds the commissaires failed the chainset he was using… lots of other riders using the same chainset were passed, his was a different colour though. 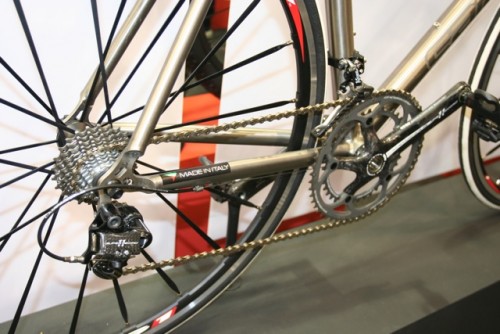 Day 2 – there is more than one exhibition centre in Milan

Jo and I spend a hot, sticky day hauling bags and cameras around Milan – all was going well, our hotel was next to the city-centre exhibition hall so not too far to lug all the stuff. Turns out despite what the nice lady in our Milan hotel said, it's next to the wrong exhibition hall… time to jump on a bus and then the metro to the futuristic city that is Milan's Fiera Rho exhibition centre – it's huge, all glass canopies, elevated walkways and countless travellators. The bike show is at the far end passed countless halls that are soon to be filled with shoes and handbags.

We do the show, we do the pics, we do the video… it was worth the trip (report coming soon).

Now it's back on the travellator, back into the metro, Centrale Station and then a near four hour train journey south. Wake up when the train stops in Rimini – not sure how long it has been stopped. Not long it turns out. We hit the Italian seaside around midnight. 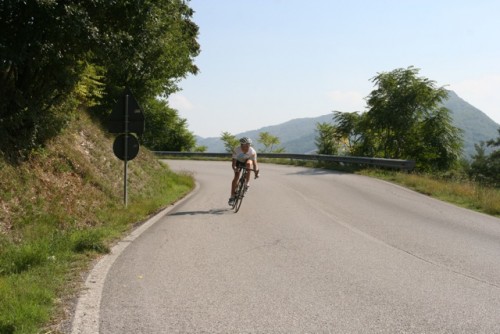 We're staying at the Belvedere Bike Hotel, “nice” doesn't really cover it. Jo goes out and nails 75Km on a guided ride up into the hills. I stay behind and write about last week's visit to Trek's 2010 launch in Milton Keynes. In the late afternoon though we both get out for a quick blast up to some nearby hill towns and end up chasing the light back to the hotel… this it turns out will become a bit of a theme.

“It's 85Km out, stopping for coffee in Urbino then on to Furlo where we will have a buffet lunch then you can either put your bike on the bus or ride back… you putting your bike on the bus?” The question proves immaterial cos it's an early start and delayed by Trek picture fettling… we, okay I, miss it. Starting about an hour later we decide to catch them up. Coffee in Urbino though also includes cake and the place is so special we stay longer than intended. We go over the top to Furlo some nicely graded climbs followed by one long swoopy descent to the valley floor… we get to the restaurant just as everybody else is preparing to leave. No matter, arrangements are made by Marina the force of nature behind the Belvedere a table is cleared and in a now empty garden we are treated to a stupendous feast + wine. 75Km, and some hours, later I'm still full.

On the way back we ride through the actual Furlo Gorge which is as jaw-dropping as the meal we've just eaten. We decide to take the long route back via the coast rapping out a fairly steady 30KPH. It's after 4 and the sun goes down about 7, you do the maths. One town short of home it's too dark to continue, we call for help. The old Italian chaps in the bar stop and stare when 20 minutes later two attractive young ladies, dressed in white (one of them in heels) turn up in a van to pick us up and insist on loading our bikes (we tried to stop 'em) – Elenora, in heels, doesn't even blink when she gets an oily chainring tattoo. If Carlsberg did bike tours they would be like this, except the beer wouldn't be as good. I feel bad about that chainring tattoo though.