Hands on with B'Twin's £1,000 carbon fibre road bike with a Shimano 105 groupset
by David Arthur @davearthur

With a UCI approved carbon fibre frameset and a Shimano 105 groupset, B’Twin’s Mach 720 is a very good looking bike for £1,000. It's just arrived in the office and before it hits the road, here's a first look.

B’Twin might be best known for its range of affordable Triban models that have been responsible for getting many people into cycling, but the company also produces a range of smartly designed and very well equipped carbon fibre road bikes. Its offering is split between two model lines, the Ultra at the top, and this more affordable Mach. 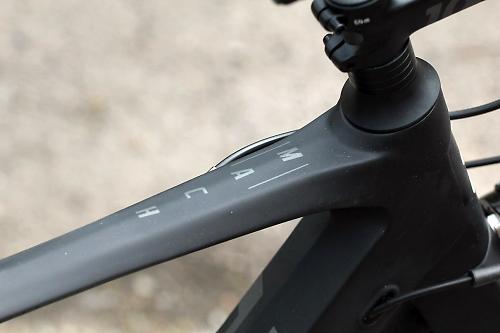 The Mach frame, now in its third generation, was developed with, and is raced by, B’Twin’s under-19 racing team. B’Twin has constructed the frame by taking a similar approach to other manufacturers, in that has has split the frame into two halves. Not literally; the lower half, the ‘Dynamic Structure’ comprising the forks, steerer tube, down tube, bottom bracket and chainstays, are oversized to provide stiffness, while the top tube, seat tube and seat stays form the ‘Supporting Structure’ and are designed to provide vibration damping qualities. 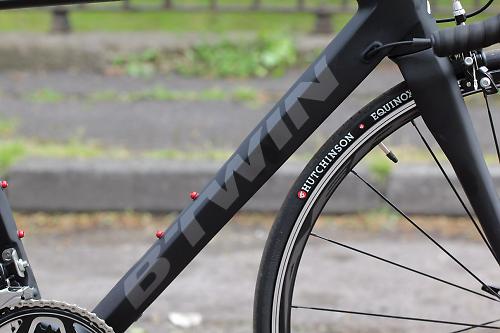 It’s without doubt the most angular looking frame we’ve had in for test. B’Twin says the purpose of the angular design language is to provide “extreme rigidity when flexed.” There's lots of oversizing, of course, the down tube is huge, 57mm in diameter at the tapered head tube and 60mm at the bottom bracket. In contrast, the seat stays are small profile to provide smoothness, and the company reckons the kinks “enable micro-deformations and therefore better vibration filtering.” 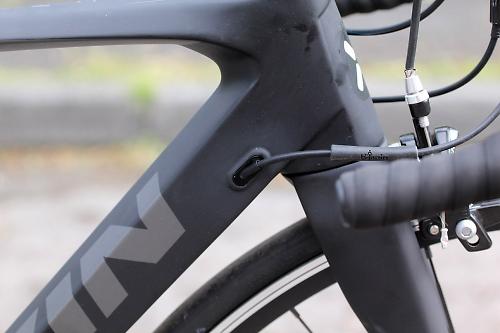 A standout feature is the extended seat tube. B’Twin says this approach means that regardless of seatpost height, the ability of the seat tube/seat stay/top tube junction to provide the necessary flex for a smooth ride won't be impinged upon. There are modern details like internal cable routing, a tapered head tube and the dropouts are moulded from carbon fibre. And not very modern details like the external threaded bottom bracket. That'll please home mechanics as this type of bottom bracket is easier to change and is less prone to creaking. 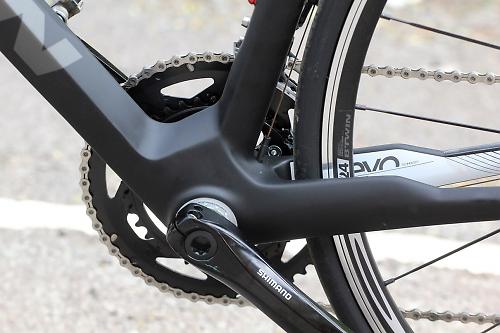 B’Twin claims a 1,150g weight for a size 55cm frame, and 320g for the fork. The frame uses a geometry that B’Twin has been using on its Performance bikes for the past decade, and was originally developed with a ‘professional ergonomics laboratory’. What that means in reality is the 53cm bike we have in for testing has a 550mm top tube with a 119mm head tube, 985mm wheelbase and 73 degree head angle and 74 degree seat angle. Those are very racy numbers indeed. B’Twin offers six sizes from 51 through to 61cm. 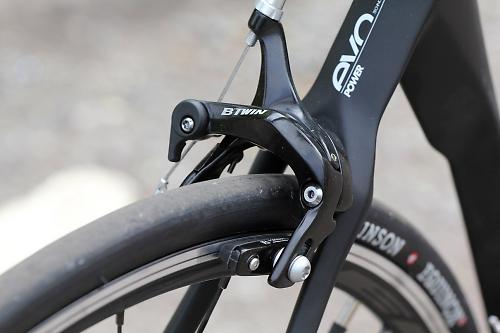 This Mach 720 model is built with a Shimano 105 11-speed groupset, with a 52/36t semi-compact non-series Shimano chainset and an 11-28t cassette. B’Twin has used its own brand components everywhere else, including its own dual pivot brake calipers and wheels, which feature an aero shaped 24mm deep aluminium rim and have a 1,760g claimed weight. They are fitted with 23mm Hutchinson Equinox tyres. 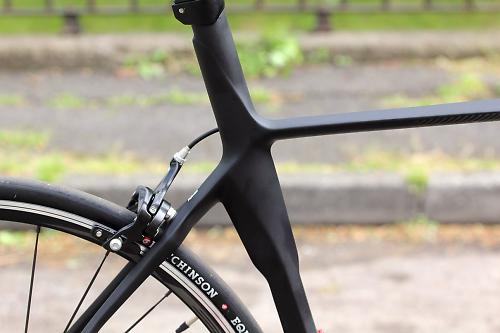 Completing the build is B’Twin’s own aluminum handlebar with a shallow drop, matching stem, seatpost and saddle. The bar tape is worth a mention because they have fitted bolt-in bar end plugs, a very nice detail that because it prevents the plugs from falling out which can happen if they’re not fitted properly. 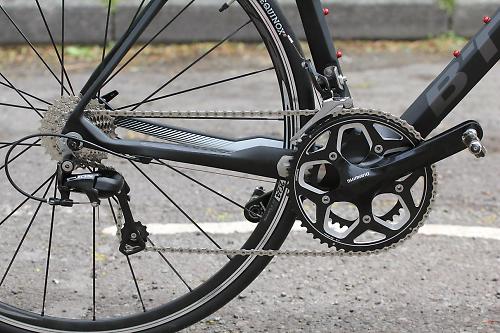 The £1,000 price point is a fiercely competitive and there are a lot of very good bikes to choose from. Aluminium is still the most common material at this price, but there are several carbon fibre bikes on offer. The main drawback with a carbon bike at this price is the downgraded components compared to an aluminum bike, to account for the higher cost tied up in the carbon frame. An aluminium bike still looks to offer the best value at this price, but it’s impressive that B’Twin manages to offer such a well equipped carbon bike for a grand. 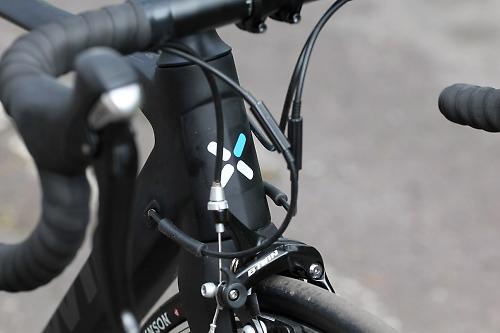 The B’Twin Mach 720 looks to offer few concessions and is very impressively equipped. Now it’s just a case of getting it out on the road and see if the performance stacks up as well as it does on paper. Find out more at www.decathlon.co.uk