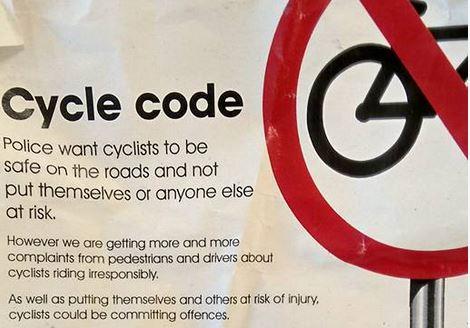 Pamphlet accompanied by 'No Cycling' sign warns riders of consequences of breaking law - 'is there a leaflet for drivers too? ask critics...
by Simon_MacMichael

Avon & Somerset Constabulary have produced a ‘Cycle Code’ leaflet telling cyclists how to behave on the road – and warning them of the legal consequences they could face if they don’t. The leaflet has attracted criticism on Twitter from cyclists.

Illustrated with a prominent ‘No Cycling’ sign, the leaflet says: “Police want cyclists to be safe on the road and not put themselves or anyone else at risk.

“However we are getting more and more complaints from pedestrians and drivers about cyclists riding irresponsibly.

“As well as putting themselves and others at risk of injury, cyclists could be committing offences.”

Those are listed on the leaflet, a picture of which was posted to Twitter by Bristol-based Boneshaker Magazine.

£2.5k fine! Hope @ASPolice will be handing a motoring equivalent of this to every mobile-using driver, too #cycling pic.twitter.com/n2SJnwYb0C

It lists four offences for which cyclists risk a £50 fine – riding on the footpath, ignoring red traffic lights, not displaying lights at night, and carrying more than one person on a standard bicycle – as well as outlining circumstances where the courts can impose tougher penalties.

The leaflet came under criticism from several cyclists on Twitter, with tweets including:

@boneshakermag wonder if @ASPolice would be willing to put a number to the "increased complaints" line.

@boneshakermag @ASPolice Nice of them to illustrate it with a massive "no cycles" sign. Really sets the tone.

In late 2013, the first two weeks of a major road safety campaign run by the police force saw 365 drivers and 324 cyclists stopped for a variety of offences.

In the case of drivers, the most likely reason to be stopped was for encroaching on Advanced Stop Lines, while for cyclists it was riding through red lights.

At the time, Sergeant Sean Underwood, who led the operation said: “The campaign has been going really well.

“The more people we speak to, the more we realise that there is a genuine lack of knowledge of the law in this area.

“The fact that we have stopped and spoken to so many motorists for stopping in the cycle box just goes to show that people don’t realise this is an offence.”