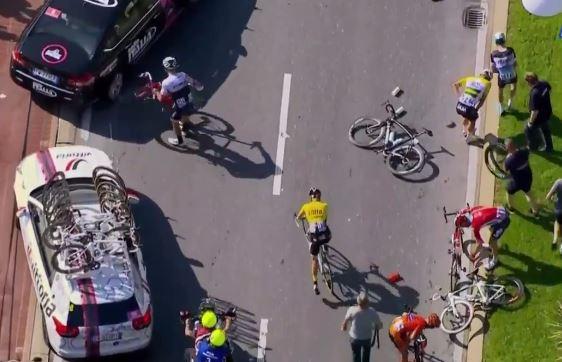 A big crash towards the end of yesterday’s Stage 2 of the Giro d’Italia in Genoa was caused by a man on a bike who rode onto the course of the race, according to Trek Factory Racing rider Eugenio Alafaci.

In a post on Facebook following the stage, Alafaci said: "If I get hold of the dickhead that had the bright idea of jumping into the peloton on a fixie with 10km to go, making us crash, I swear he’d be in for it.”

Although the incident itself wasn’t caught on TV cameras, it was filmed by spectator Francesco Cordua, who was watching the race from across the road.

At around 10 seconds in, you can see the cyclist – who does not appear to have been identified – ride off the seafront promenade and onto the road, emerging from behind a hedge.

(Warning - the video has a rather sweary voiceover).

The crash split the peloton, and among those left behind was AG2R’s Domenico Pozzovivo, who lost more than a minute to his rivals for the overall.

Among the riders brought down was IAM’s Heinrich Haussler, who had been involved in a separate crash minutes beforehand, and Alafaci’s team mate, Marco Coledan, who lost a lot of skin in the incident.

Both he and Alafaci confirmed what had happened to media after the stage.