Subscribe
Back to Tech news
TECH NEWS
Art and design

Still some work to do before it's ridable, James Novak concedes
by John Stevenson

3D printing has already made it easy for inventors to bring clever plastic widgets to market without shelling out on expensive injection moulds, and many are confident we'll see complete 3D printed bikes one day.

James Novak's FIX3D frame is one of the more promising-looking designs we've seen, but even the inventor, an industrial designer, university lecturer, and researcher from Brisbane, Australia, admits it's a long way from being ready for prime time.

The FIX3D is on display at an exhibition called Making A Difference / A Difference in Making at the Bozar Centre for Fine Arts, in Brussels, curated by software and engineering company Materialise. 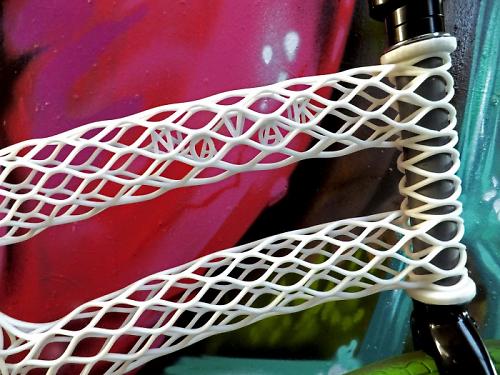 Novak was even able to shape his name into the frame

The first incarnation of Novak's ethereal lattice frame was printed using stereolithography (SLA), building up layer upon layer of resin which is then cured with ultraviolet light.

However, parts manufactured with this technique — more commonly used for prototyping than making usable components — have problems. As Novak puts it in a recent blog post: "The SLA frame was a delicate thing to manage, and really showed its limitations over the hot Australian summer when it literally melted whilst stored in my house!" 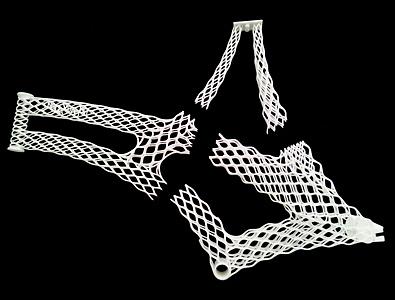 The SLS-printed version in three pieces

Presented with the chance to make a more durable version for the Making A Difference expo, Novak went for a 3D printing technique called Selective Laser Sintering (SLS) which binds powdered material into the desired shape by zapping it with a frickin' laser beam.

It's the same technique used by Charge bikes for a limited run of titanium dropouts a couple of years ago.

To keep the cost of the frame under control, Novak's gone for polyamide (the class of plastics that includes nylon) rather than titanium. 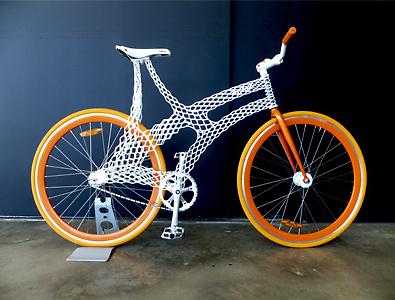 However, SLS printing isn't currently suitable for large pieces such as bike frames.

Novak says on his blog: "The limitation with SLS however is the smaller print volume, requiring the frame to be cut into 3 segments and glued together after printing.

"It certainly feels a bit more durable, although before anyone asks, no this still can’t be ridden!"

But like other 3D printing pioneers and experimenters, Novak is optimistic that the problems will be overcome in time.

He says: "With SLS printing still limited by size, it will be some years before titanium or composite fiber material printers are able to print this in 1 piece… But it will be exciting when it happens."