Team Wiggins announced they’ll be riding Pinarello bikes equipped with SRAM groupsets and Zipp wheels earlier this week. There was speculation the team would ride another brand of bike, but he’ll remain on essentially the same frame he has ridden with Team Sky but with different groupset and wheels. He was never really going to ride anything else was he? He's even lined up Jaguar and Rapha to sponsor his personal team. He obviously likes what he knows. The Pinarello Dogma F8 is decked out with the latest SRAM Red 22 groupset, one of the lightest groupsets on the market. Wiggo has been used to Shimano’s electronic Dura-Ace Di2 groupset for the past few seasons, so he’ll have to adjust to a mechanical drivetrain, it'll be interested to hear how he gets on with it. SRAM doesn't sponsor as many top teams as it used to, so this is quite a coup for the US company. Zipp, the wheel brand owned by SRAM, will supply the team with wheels, and they’ll have plenty of choice, from the lightweight 202 to the all-round 303 and 404, up to the deeper section 808 for faster stages. The bike is seen here set up with the 404, which they'll most likely use for the entire race, as it offers a good balance of aerodynamics and weight and is ideally suited to the route. They’re riding the tubular versions of these wheels naturally, and shod with Continental Grand Prix tyres. We'll confirm the tyre width when we next speak with Simon, he's off out speaking to the riders and photographing more team bikes, but we'd imagine he's on 25mm tyres. Wiggo is also sticking with his favoured Speedplay pedals, and he's also use an SRM PowerMeter (he used Stages with Team Sky) but it's only on his main race bike, there isn't one on his spare bike pictured atop the Jaguar team car at the top of the article. Fizik is another sponsor that Wiggins has carried over from Team Sky, with the Italian company supplying its saddles and bar tape. For the handlebars, stem and seatpost, the team will use Pinarello’s own MOST kit. 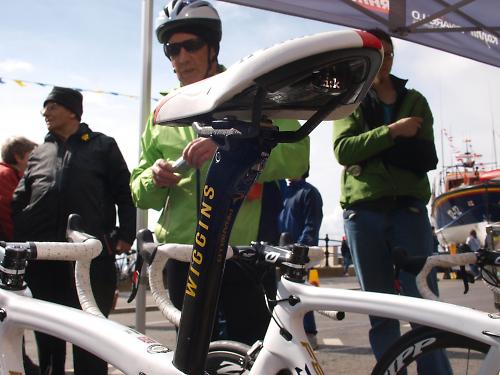 The bike is of course finished with a custom paint job, a nice simple white with black decals. The seatpost and top tube are adorned with his name, and are the only clues, along with the number one board fixed to the rear brake caliper, that this bike belongs to the Olympic and Tour de France champion. More on this bike and the rest of the bikes in the Tour de Yorkshire coming soon.