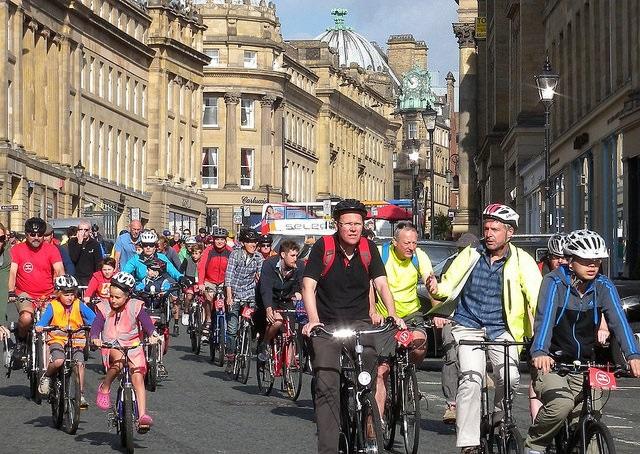 A group ride in Newcastle, organised as a means of campaigning for safer cycling conditions, has had to be cancelled on safety grounds. The local Safety Advisory Group concluded that they were unable to support the event, citing the risk involved in cycling on live roads in a large group of riders.

Newcycling had been planning to hold the Civic Cycle Ride today as part of the Space for Cycling campaign. Unfortunately, the Safety Advisory Group emailed on Friday to say it could not support the event, writing:

The national Space for Cycling campaign aims to create cycle-friendly conditions via protected cycleways, lower speed limits and improved infrastructure. The Civic Cycle Ride was intended to promote these aims, but without permission campaigners were left to meet outside the Civic Centre to discuss issues without riding together.

The Newcycling event has been held twice before, most recently in September. “The first two rides were really good fun,” said Katja Leyendecker, a member of the group’s management committee. “We had young kids on their parents’ bikes and slightly older ones cycling by themselves.”

The group was again hoping for a good crowd and members proclaimed themselves to be ‘absolute gutted’ at what has happened following months of planning.

Leyendecker felt that the ride would have made an important statement, emphasising that despite recent efforts, Newcastle is yet to see real citywide planning for sustainable transport.

“There have been spot improvements, here and there – sometimes quite bonkers ones too – and, ultimately, we are still waiting for a serious and consistent approach to emerge from the council.

“For the long run, we think they should make contact with an acclaimed urban expert to clearly inclusively chart the transport transition. In the short term, identifying and removing dangerous rat runs, especially near schools, and introducing well-designed safe contraflows are probably the most cost-effective things the council could do straight away. And Newcastle really must start building protected cycleways on main roads.”

Newcastle City Council later tweeted: “We back the ride in principle and all safe cycling activities. We are committed to cycling and hope cyclists enjoy their day #civicride2015”

To which Newcycling replied: “Great! Next time, please, could you be more constructive, helpful and timely then, please. Let's keep talking.”