Hot on the heels of its new Virb X action camera earlier this week, GPS specialist Garmin has unveiled two new Vector 2 and Vector 2S pedal-based power meters, which are easier to install than the original Vector.

Like the original Vector power meter, the two new Vector 2 power meters measure power at the pedal and feature a redesigned pedal pod that Garmin claims is easier to install and transfer between different bikes. The new pedal pods also incorporate status LED lights for displaying setup and maintenance information.

Vector 2 is a dual-sided power meter that offers left and right power information, and can display detailed data about the efficiency of your pedal stroke, so you could for example identify where force is being applied during the pedal revolution. The more affordable Vector 2S is a single-side left crank arm and measures deflection in the pedal spindle and is factory calibrated to determine total power. Vector 2S can be upgraded to Vector 2. 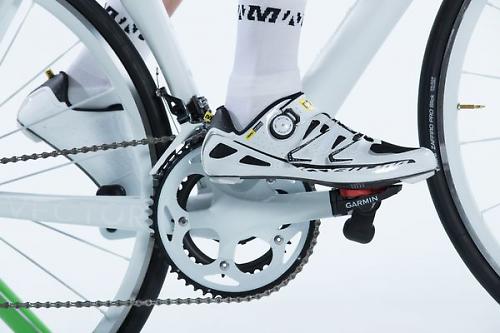 “The introduction of Vector and Vector S changed the way power was measured, and made power metrics accessible to cyclists of all levels,” said Andrew Silver, Garmin EMEA Product Manager, Fitness. “Vector 2 and Vector 2S add valuable new features and improve key components to take this to the next level. By redesigning the pedal pod and eliminating the need for washers to address recessed crank faces, adding LED light displays and offering the most advanced metrics for training, it’s easier than ever for cyclists to install, maintain, upgrade and track power for a better ride.”

The new Vector 2 uses no washers, it’s simply a case of fitting the pedal as you would any regular pedal. It’ll work with most crank arm designs including carbon fibre cranks. The pedal pod is installed after the pedal is fitted to the crank arm. Washers can still be fitted to modify the q factor if necessary. As with the original Vector system, the new Vector 2 uses ANT+ to communicate with compatible cycling computers, like Garmin’s own Edge and Forerunner models.

Weight for the Vector 2 pedal is 156g and 23g for the pedal pod. Both Vector systems use Look Keo cleats. The battery life is a claimed 175 hours from a replaceable CR2032.