Riding the Paris-Roubaix Challenge this Saturday? Here’s a Strava preview of the pavé sectors
by David Arthur @davearthur

It's Paris-Roubaix this weekend, or the Hell of the North as it’s often called, and it brings the curtain down on the cobbled classics season, as it does on the career of Sir Bradley Wiggins with Team Sky. This race is the last chance for the cobbled classics specialists to clinch victory before the circus moves onto the smoother roads of the Ardennes classics.

The day before the race is the Paris-Roubaix Challenge, and is an opportunity for thousands of amateur cyclists to tackle the very same cobbled roads the professionals will be racing over the following day. It’s only when you ride the cobbles that you can really fully appreciate how hard racing over these poorly maintained roads must be for the pros. 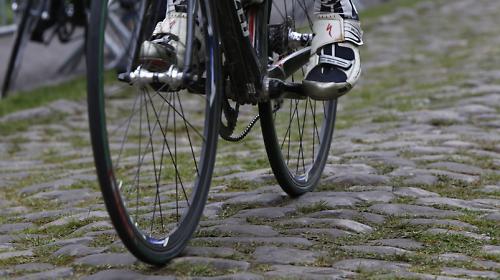 Following our Strava preview of Tour of Flanders last week, we’ve been using the popular social training website to take a closer look at the speeds and times of the key cobbled sectors, so if you’re riding the sportive, you can give yourself a realistic target time, or simple see how you compare to others when you’ve completed the ride.

A warning, the cobbles of Paris-Roubaix are very different to the smooth and well maintained cobbles of Tour of Flanders. This makes it a brutal ride that is extremely punishing on both bikes and body. It’s no wonder the professional teams go to such lengths modifying bikes to smooth out the vibrations, and why most amateur riders tackling the sportive are advised to make similar preparations. The widest tyres you can fit in your frame and double wrap bar tape are both meaures that are highly recommended.

Niki Terpstra claims the most KOMs for the route. He won the race in 2014, and averaged 45.38km/h during his solo attack 6.2km from the finish last, while hitting a peak of 57.29km/h when he first launched his race-winning move. His lap around the velodrome shows he didn’t relax and take in the applause, as he averaged 46.6km/h. You can view his ride on Strava here. 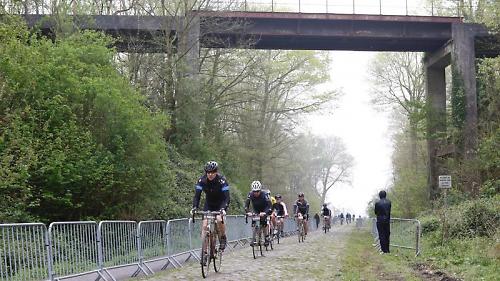 There are two sections that strike fear into the heart of the racers, and any amateur cyclist that has ridden them: Troue d’Arenberg and Carrefour de l’Arbre. Looking at the leaderboards on Strava, it’s no wonder most of the top ten places are filled by professional riders. There is one exception: amateur cyclist Frederic Gronier holds the top spot on the Arenberg segment.

It always produces stunning images, but the Troue d’Arenberg is a brutally hard sector. Niki Terpstra, the fastest pro to have shared his ride on Strava, recorded an average speed for the 2.2km section of 36.9km/h, producing a time of 3min 40sec. That’s pretty swift. It might sound short but it’s not actually flat, it dips in the middle and rises again, and there’s not much of a smooth line to speak of. The cobbles are poorly maintained too, some are missing altogether, making it very hard to maintain your momentum. 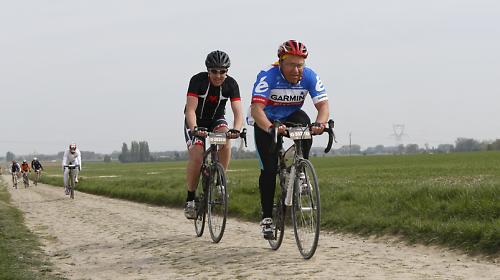 Another tough sector, and its position late in the race can sometimes ensure it’s the platform for a potential race-winning attack, is the Carrefour de l’Arbre. It’s also a hard section for amateurs, who will by this stage be pretty tired and wishing they had never signed up for this ridiculous ride. It’s just 2km long which sounds easy but the cobbles on this section of road make it exceptionally tough to ride at a decent speed. Taylor Phinney holds the KOM from his ride in 2012 here, with an average speed of 37.0km/h and time of 3min 18sec. Whether you’re a professional racer or an amateur cyclist tackling the sportive, the cobbles of Paris-Roubaix make it an exceptionally hard and demanding ride, for equipment and body, but the satisfaction from riding into the velodrome at the end of the ride is amazing and quite a spectacular and dramatic finish.

If you want further reading on the Paris-Roubaix Challenge, David Else’s blog is worth a read, and you can read about my puncture fest from a few years ago.