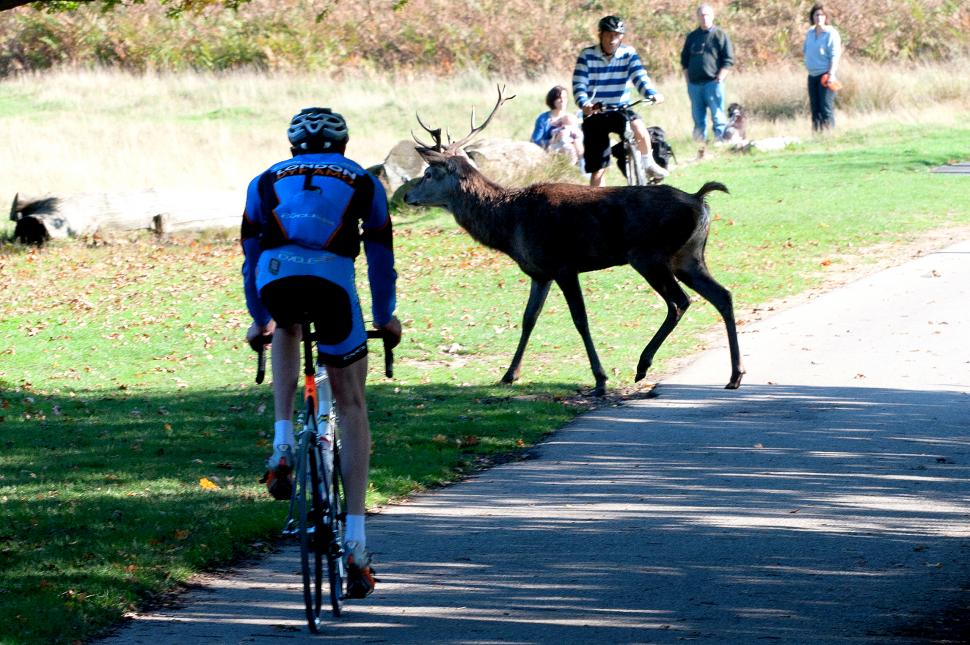 Accommodating user groups in park is a challenge for police, says club chairman
by John Stevenson

The rider fined for riding in Richmond Park at 41mph has resigned from his cycling club, London Dynamo, although he was not a member of the club when he was pinged descending the park's Sawyer's Hill.

Rory Palmer, 42, was fined a total of £150 after pleading guilty to exceeding the 20mph speed limit in the park on January 2.

Palmer was facing expulsion from London Dynamo, which insists its members obey the Highway Code.

Paul Harknett, chairman of the club, told road.cc that Palmer had joined the club just three weeks ago, and is "embarrassed and apologetic" about the affair.

Harknett says Palmer was new to the area and had not previously ridden round Richmond Park in the clockwise direction that takes you down Sawyer's Hill.

According to Harknett, Palmer "was certainly unaware of possible police speed enforcement, nor their usual trap location at the foot of Sawyers."

He said: "There was no traffic on the descent down Sawyers according to Rory."

Police stop and fine a couple of riders per year, says Harknett but a look at Strava  segments such as Sawyer's Hill past Holly Lodge and the notoriously fast descent of Broomfield Hill, now flagged as hazardous shows many many riders going as fast or faster than Rory Palmer.

Given the vast numbers of riders using the park, this is hardly surprising.

"Richmond Park might be the busiest road in the world for cyclists," says Harknett. At weekends, cyclists outnumber drivers three to one.

Park authorities have a challenging task managing the numerous user groups. Harknett is more aware of those issues than most as he chairs the Richmond Park police panel, which brings together representatives of the groups that use the park, local residents and and police and park authorities.

His advice to riders using the park is simple: "Don't take the piss, be observant, be respectful."

Police fine many more drivers than riders, says Harknett, and he believes they take a pragmatic approach to policing the park that helps to keep it a relatively tranquil place and, importantly, helps safeguard the large deer population.

"What we have as exists currently in Richmond Park kind of works," he says. "Despite the vast numbers using the roads it's far safer for cyclists to use the park than the local A roads.

"The police come under enormous pressure to clamp down on cyclists and they are surprisingly pragmatic. Just by parking up they slow people down.

"They do a couple of riders a year but the number of riders who go over 30-35mph must be in the thousands.

"The only way things can get better is through dialog and consultation."

But Harknett believes relations between groups, especially cyclists and drivers, have improved recently. "Things are beginning to settle down," he says, "with drivers realising they have to be patient on the hills."

Nevertheless, a follow-up meeting last week set up a working group that is working on initiatives that will improve relations between the different road user groups, improve safety and improve enjoyment of Richmond Park.

"That is the way forward," Harknett says.

Like many cycling clubs that use Richmond Park, London Dynamo has the difficult task of trying to encourage its members to behave responsibly while acknowledging that almost everyone who uses the park breaks the speed limit.

"Police hold us up as an examplar," he says. "They would like more cyclists that enjoy Richmond Park  to be members of clubs because we have a code of conduct, we will discipline riders."

Nevertheless there are stories of London Dynamo riders being a little over-enthusiastic as they ride or train in the park.

"We insist riders on club runs wear club kit so if we get a complaint about say a rider flicking a V at a driver in Weybridge we can track them down," says Harknett.

He added that the club has a code of conduct for members (at section 7 of its membership page) and if they are spotted riding inconsiderately, he wants to hear about it.

He told the Evening Standard recently: "We have not been afraid to eject our members in the past, doing so with two cyclists who jumped red lights.”