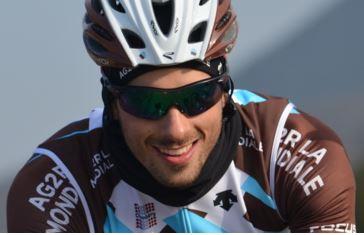 21-year-old who was set to follow Olympic champ dad as middle-distance runner now part of AG2R's under-23 squad...
by Simon_MacMichael

The son of Olympic gold medallist athlete Steve Ovett has been talking about his decision to swap running for cycling – and to move from Australia to Europe to join French team AG2R-La Mondiale’s development squad.

Freddy Ovett, aged 21, was born in Scotland and raised in Victoria, Australia, where he showed promise as a middle distance runner, including in the 800 metres – the event in which his father beat great rival Sebastian Coe to Olympic gold at Moscow in 1980.

He planned to follow his father into the sport, but a knee injury sustained while attending the University of Oregon saw him take to cycling and after testing with the Victoria Institute of Sport (VIS), he has decided to follow a career in cycling, reports Australian newspaper, The Advertiser.

VIS coach Dave Sanders, said: “He has a big motor and more than anything else he has the desire,” but added that Ovett was still learning about road cycling and needed to gain experience.

“But the European racing will suit him a lot better than the Australian racing,” he insisted, “because his talent will really shine when it’s a last man standing, hill-top finish,” adding that his “phenomenal” power-to-weight ratio makes him a natural climber.

Ovett said he had become somewhat disillusioned with athletics because of drug controversies and dominance of the African nations, which made his decision to pursue cycling easier.

His decision to switch sports is also reported to be partly due to African dominance of middle- and long-distance events, and his disillusionment with what he sees as a culture of doping within athletics.

Given cycling’s own well-document issues with riders using performance enhancing drugs, that may come as an eye-opener to some, although the UCI does point out that it is ahead of other sports when it comes to the extent and nature of testing.

“I spoke at length with the people associated with these institutes, Dave Sanders in particular, and they convinced me I could have a big future in the sport if I committed fully then and there,” Ovett said.

“I weighed everything up, which was not easy as I was living out of home and supporting myself completely, and made the decision to go for it.

“Here I am in Europe a year on, riding for one of the biggest development teams in the world; funny how some things work out.”

“Baden and I discussed this at great length and figured that the French racing scene suited me best out of all the different racing scenes in the world.

“Deciding against the AIS under-23 programme and going to a French under-23 team is obviously different to what most people would do, but we are convinced it’s the best thing for me,” he added.

There may be health benefits stemming from Ovett’s decision to switch sports, too.

Last year, we reported on a study which found that among people aged 19-45 who regularly participate in bike or long-distance running races, it is runners who suffer more muscle damage, soreness and inflammation than cyclists after a period of intense workouts.

“Long-distance runners are encouraged to vary their training schedules, mixing higher and lower exercise workloads, and to include other training modalities like swimming or cycling to maintain the highest level of performance.”