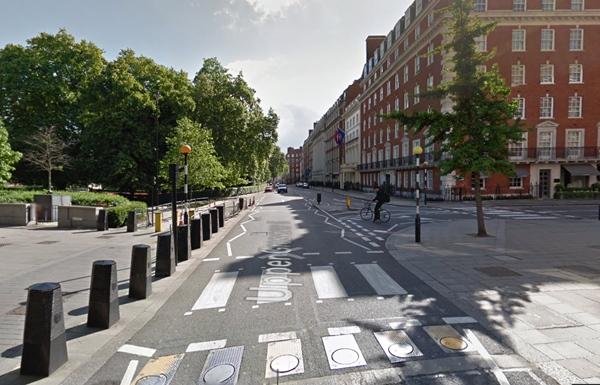 A London commuter shoved off his bike by another cyclist is appealing for witnesses reports the London Evening Standard. Ian Henderson, 55, has been told it will take a year to fully recover from the broken hip he sustained in the January 28 attack.

Henderson said that the other cyclist cut in front of him on a narrow road while he was on his way to work during rush hour. When he caught up with the rider at a zebra crossing outside the US Embassy in Grosvenor Square, Mayfair, Henderson warned him to be more careful.

The man responded that Henderson was ‘too f***ing slow’ and pushed his right shoulder, causing him to fall.

“My bike went left, I went down and I saw a brilliant white flash as my pelvis exploded. Cyclists and car drivers behind us were horrified. They shouted at him to stop and he looked round, so must have seen me on the ground, but kept going.

“An ambulance was called, the police arrived, my bike was taken care of and I was once again reminded how kind most people are. I also realised that I wasn’t going to walk away from this one – I couldn’t even sit up without extreme pain.”

Henderson has been told that he may be unable to return to work for several months and that it is likely to take a year for him to fully recover. “I do think it reminds cyclists of the duty of care that they have towards each and the risks of doing something stupid.”

Police have reviewed CCTV footage but have been unable to identify the man. Henderson describes him as being 45 to 50 years old, with a grey beard and wearing dark waterproofs with orange detail. He was riding a white Bianchi mountain bike with black lettering. If you have any information, you can contact police on 101, quoting 6504284/15 or contact Crimestoppers anonymously on 0800 555 111.

In December, a man who deliberately knocked another cyclist off his bike on a busy London street was given a caution for common assault. The victim, Raphael Carrondo, said the police only started investigating after he posted bike cam video footage of the attack on YouTube. "I was expecting a little bit more than a caution but if that is what the police think should be done then that is ok. I was hoping he might have to do some community work."