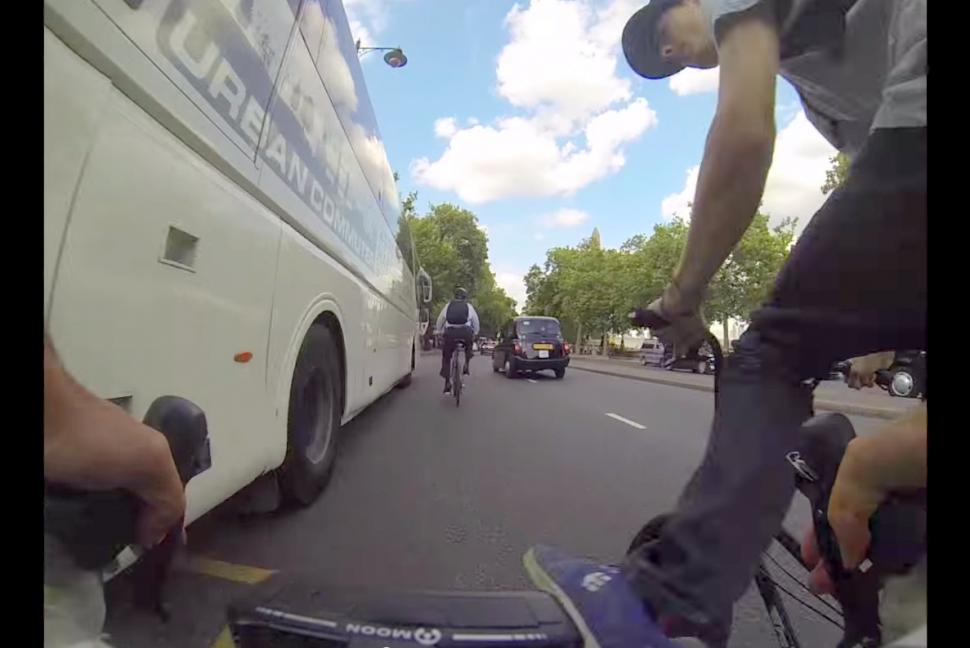 A cyclist kicked off his bike by a another rider on a busy London street has expressed his disappointment that his assailant only received a caution.

Raphael Carrondo was attacked as he rode along London's Victoria Embankment on August 6. He only sustained cuts and bruises, but could easily have ended up under a coach.

He posted his bike cam video of the attack on YouTube:

After he complained to the Evening Standard that police did not seem to be taking the case seriously, the Met tracked down the other rider.

He told the Standard's Rachel Blundy: "Shortly after the story went out and the YouTube clip went viral the police started investigating. They found the person. A member of the public came forward and said they recognised the rider. They asked him to come in for an interview and he was cautioned afterwards.

"I was expecting a little bit more than a caution but if that is what the police think should be done then that is ok. I was hoping he might have to do some community work."

The 32-year-old sales and marketing consultant, originally from Brazil, previously said he had posted the video when police told him they could not afford the resources to track down the BMXer if he didn't know who he was.

He said: "The next day I say, 'If the police can't do anything, I can.' This is something that probably happens every day, that kid probably did something to someone else. With social media as it is today we can find someone doing the wrong thing."

Carrondo was shocked at the level of abuse he was subjected to after posting the video.

He said: "What I wasn't expecting was that when I put it online, that the wrong became me. Everybody was trying to justify why the kid would react like this."

Despite the online abuse and the incident itself, Carrondo has carried on riding.

He said: "I never stopped - I have kept cycling. I had to because it is how I commute to work."

The Metropolitan Police said they had contacted Mr Carrondo after watching footage of the attack.

A spokesman said: "In late October, when officers from the Roads and Transport Policing Command's Cycle Task Force became aware of the footage of the incident on 6 August, they contacted the victim and launched an investigation.

"On 11 November a 19-year-old man was arrested at his home address in south London, in connection with the investigation. He was later bailed pending further enquiries.

"On 24 November the 19-year-old man accepted a caution for common assault."