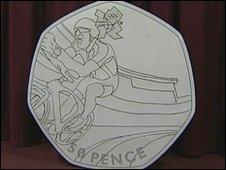 A teenager's design featuring a cyclist in a velodrome has been accepted as the new face of an Olympics-inspired 50p coin.

Theo Crutchley-Mack, 16, from Halifax was delighted to learn that his design had been chosen from 5,000 entries by the Royal Mint.

Up to three million of the new coins will be released into circulation later this year.

"Just the thought of my design going throughout England and millions of people seeing my design, that's just absolutely amazing, I can't think of much better than that," Theo told the BBC.

Dave Knight, head of commemorative coins at the Royal Mint, explained why the design had been chosen. "It's a very good design,” he said, “and it is technically very proficient. He has really captured the essence of speed and cycling in general.”

Theo was awarded with a special commemorative gold coin featuring his design.

The teenager, who is a keen cyclist himself, described how the picture had been lost under a pile of papers before his mother found it and encouraged him to send it in to the competition.

Theo's coin is the second in a series of 29 officially licensed commemorative Olympic 50p coins. The first was created by nine-year-old Florence Jackson and unveiled in October last year.

Each coin in the series depicts a different Olympic and Paralympic sport, with the remaining 27 coins to be announced later this year