Subscribe
Back to news
news
Infrastructure
Art and design 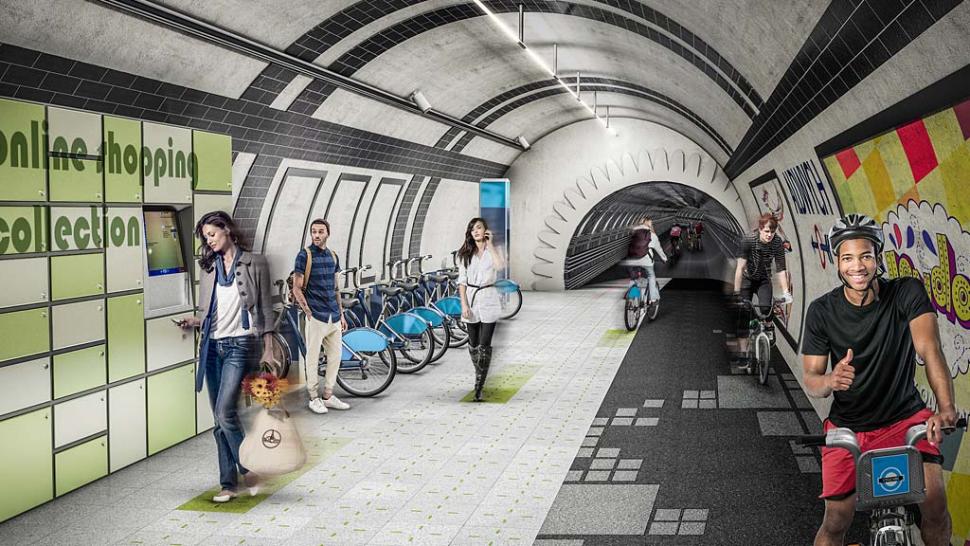 Plan to put turn disused Tube lines into cycle paths under London - but could it work? (+ video)

Award winning London Underline concept could ease city's overcrowding, say designers - we dig in to the details...
by Simon_MacMichael

A proposal to turn disused Underground tunnels beneath London into a network of paths for cyclists and pedestrians has won an award for Best Conceptual Project at the London Planning Awards, hosted earlier this week by the city’s mayor, Boris Johnson.

Using former rail tunnels as cycle routes is not as unusual as it might seem, here in the UK we already have the Two Tunnels route in Bath, while last year a cycling tunnel was opened in Lyon using what had been a road tunnel. The London plan though is even more ambitious, going deep underground - we look at how well it could work in practice.

Designed by international architecture firm Gensler, the London Underline would use tunnels from Holborn to Aldwych (formerly Strand) stations, a branch of the Piccadilly Line closed in 1994, and from Charing Cross to Green Park, obsolete since the Jubilee Line Extension opened in 2000.

Gensler says the tunnels could be furnished with cultural and retail spaces, and would be self-sustaining, powered by a kinetic energy system called PaveGen which generates electricity from people’s footsteps.

Ian Mulcahey, managing director of Gensler’s London office, said: “Now that London has reached the highest level of population in its history we need to think creatively about how to maximize the potential of our infrastructure.

“The adaptation of surplus and underutilised tube and rail tunnels could provide a quick and simple addition to our infrastructure network.”

The following video gives an idea of how the tunnel might look, and also canvasses the views of a taxi driver, pedestrian, cyclist and tourists regarding the concept – with the cabbie giving the impression he’d be happy to see pedestrians and cyclists disappear underground for good.

It’s not just disused London Underground tunnels that could ultimately be incorporated into a subterranean infrastructure network, according to Gensler, which says:

Underneath the whole of London is an untapped surplus of disused space in subterranean infrastructure - tube tunnels, exchanges, stations, and reservoir chambers. We envisage, through the emergence of kinetic energy technology, London’s acceptance of alternative transport, and Londoners’ insatiable urban curiosity, that a dynamic new network of pedestrian and cycle links across all boroughs could be made by regenerating this existing infrastructure.

Coming in a week when Transport for London voted in favour of the most ambitious cycling infrastructure projects yet seen in the city, the two Cycle Superhighways that will cross the centre of the capital, how viable is Gensler’s idea?

Well, as far as cyclists are concerned, the planned East-West Cycle Superhighway will pass along the Embankment close to Charing Cross station and then heads westwards towards Green Park. Would people wanting to travel by bike between the two locations want or need to use a tunnel?

Staying on the same route, from a tourist perspective, a walk from Charing Cross to Green Park would take in some of the capital’s most iconic tourist sights including Trafalgar Square and Buckingham Palace, and the pavements on the Mall are among the widest and most pleasant in the city. Would they risk missing all that by walking through a tunnel instead?

Regarding the Holborn to Aldwych route, a distance of a little more than half a kilometre, it’s difficult to see the attraction to cyclists of adding the time and effort to get down to tunnel level and re-emerge at the other end for a journey that they can do in not much more than a couple of minutes.

From a pedestrian point of view, the surface route isn’t a prime tourist area so there aren’t problems of congestion, helped again by the pavements being wide, and is an office worker, say, walking from say Holborn to Waterloo Station to catch their train home in the evening going to add a few minutes by heading underground? Again, we doubt it.

There's also the consideration that both the Tube lines involved are among the deepest on the London Underground network. For safety reasons, it's difficult to imagine that access would be via escalator, which means lifts would have to be used instead - raising the question of how many cyclists and their bikes you could squeeze into a lift at a time, and likely to result in long delays at peak times.

That’s not to say there are no merits in doing something with those disused tunnels – we’re just not convinced that making their prime purpose a transport route is the most suitable use for them.

And it has to be acknowledged that often, conceptual designs of this type are intended to provoke debate, rather than presenting something that will necessarily see the light of day.

Now, if Gensler could find something big enough to turn into a facility similar to the Mega Cavern bike park in Louisville, Kentucky that we reported on last week (videos here), we’d be well up for that – for now, the closest we have is the House of Vans skate park, which opened last year in tunnels beneath Waterloo Station.