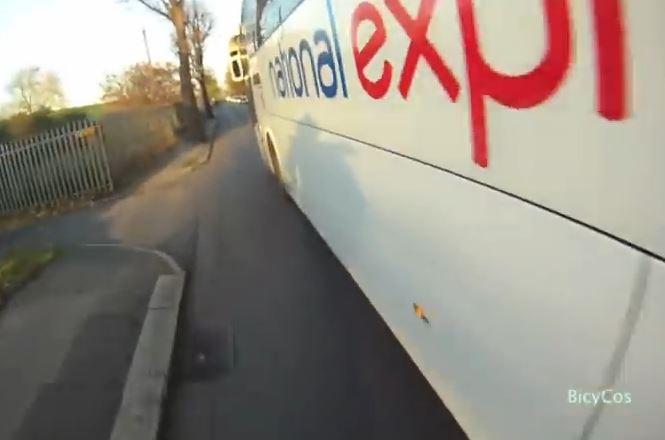 Sir John Armitt's comments to TfL board came minutes after cyclist injured in collision with National Express coach...
by Simon_MacMichael

The chairman of transport provider National Express, who also sits on the board of Transport for London (TfL), says the biggest danger to cyclists on the capital’s streets are bike riders themselves, leading to an accusation from London Cycling Campaign's Charlie Lloyd that he "blames cyclists for their own deaths."

Sir John Armitt’s remarks were made at a meeting of TfL’s board that this morning approved the two new Cycle Superhighways that will cross the centre of the capital, and came shortly after a National Express vehicle was involved in a collision at Marble Arch in which a cyclist was injured.

"I would say the biggest danger to London cyclists on the roads in London are actually themselves," he told the meeting.

"The way in which many, many, many of them ride one is surprised that in fact the number of accidents is not far larger because it is an entirely different way of cycling to which you see in many other cities," he added.

The TfL board was told of the collision between the National Express coach and the cyclist just minutes after Armitt made those comments.

He was joined in his unsuccessful attempt to block the scheme by fellow TfL board members who also sit on the boards of Canary Wharf Group and the Licensed Taxi Drivers Association (LTDA).

The LTDA has indicated it may seek a judicial review of the Cycle Superhighways, as well one on a proposed as a daytime ban on most traffic on Tottenham Court Road.

Armitt also rejected surveys which found overwhelming public support for segregated cycle infrastructure in London, saying: "The opinion polls are pretty valueless quite frankly because there is no explanation of who is actually responding.

"Without knowing where somebody is coming from when they respond to an opinion poll then it is pretty difficult to take on board the support or non-support for a scheme."

Times journalist Kaya Burgess, who runs the newspaper’s Cities Fit For Cyclists campaign which was launched in February 2012, said on Twitter that according to the Metropolitan Police, the collision took place at Marble Arch at 9.48 am today.

A police spokesman told him that the injuries sustained by the cyclist involved in the collision with the National Express coach were "not thought to be life-threatening."

National Express is a member of the Confederation for Passenger Transport, whose chief executive said last November that the organisation was “extremely concerned” about the impact of the Ccle Superhighways on operators, and in particular the loss of coach parking spaces on the Embankment.

In the wake of Armitt's comments this morning, there have been calls on Twitter for a boycott of National Express Services.

Plymouth-based CTC cycling development officer Brett Nicolle, wrote: “I will not use @nationalexpress ever, ever again after chairman Sir John Armitt blames cyclists for their own deaths.”

Will Nickell, ethics and environment officer at the University of East London Students’ Union said: “I consider it apt to boycott @nationalexpress until Sir John Armitt is no longer chair. His views of cycling are the most ignorant I've seen.”

Parimal Kumar tweeted, “Yes @tfl board member/National Express chairman John Armitt, it's cyclists who are greatest danger to themselves,” with a link to a YouTube video filmed by a cyclist who said in the description, “Although this is not the closest pass that I have had, I would say that it was potentially the most dangerous.”

A video posted to YouTube in 2013 shows a National Express coach passing extremely close to the cyclist recording the footage.

In the description to the video, user Bicycos quoted a reply he had received from the firm, which said: "The safety and well being of our customers and other road users is our highest priority and I assure you that, under no circumstances, will we tolerate the standard of driving that you have experienced.

While a National Express employee said the firm could not divulge the outcome of its investigation, they added, "I would like to reassure you that the appropriate action has been taken in line with our disciplinary policy."

During the same year, the company teamed up with Sustrans to help devise a sticker for its coaches to warn cyclists of blind spots. The design eventually chosen was described by one road.cc reader who spotted it as “near enough useless.”

Armitt, who also chairs National Express’s safety and environment committee, was chairman of the Olympic Delivery Authority which oversaw the delivery of venues, infrastructure and legacy for the London 2012 Olympic and Paralympic Games. The non-departmental government body ceased operation at the end of last year.

Charlie Lloyd, campaigns officer at the London Cycling Campaign and a former lorry driver, noted on Twitter: “John Armitt blames cyclists for their own deaths. Four cyclists died on edge of Olympic Park when he was in charge, no safe routes.”