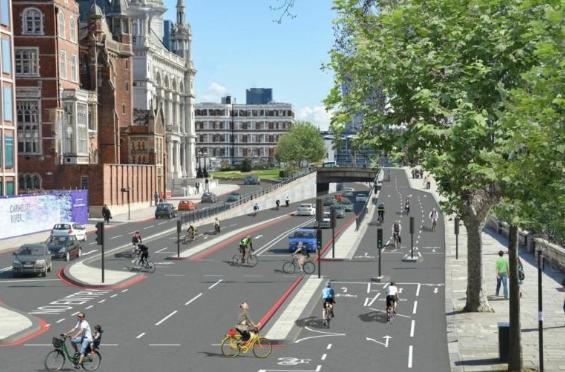 80 per cent of consultation responses back plans, though coach industry joins opponents
by Simon_MacMichael

Mayor of London Boris Johnson is being urged to "get on with" building two Cycle Superhighways that will cross the heart of the capital. That’s the message from more than 165 organisations with operations in the city that have pledged “a tidal wave of support” to the project. Among opponents of the scheme though is a body representing coach operators, who say they will lose vital parking space.

Since consultation opened in September on the two routes, one from King’s Cross to Elephant & Castle, the other from Tower Hill to the Westway, the website CyclingWorks.London has been collating responses from businesses and other organisations, and asking people to urge their employers to back the segregated infrastructure.

It says support for the routes has snowballed in recent weeks, and the list of organisations lending their support includes household names such as Microsoft, Orange and RBS, top-ranked professional services firms including consultants Deloitte and lawyers Allen & Overy, and major public sector employers, among them the Barts NHS Trust.

Yesterday, as the consultation period closed, London’s Cycling Commissioner Andrew Gilligan confirmed on the BBC programme Sunday Politics that 14,000 responses had been received, and around 80 per cent of those were in favour of the plans.

Chris Kenyon, co-ordinator of CyclingWorks.London, said: “At the beginning of this consultation we had a trickle of businesses telling us they wanted to support the Mayor’s cycling plans. By the end of it we were overwhelmed with responses.

“From Bishops to bankers, from a sofa delivery company to some of London’s most exclusive lawyers, one CEO after another has taken the time to tell us – and the Mayor – that they want these safe cycle routes built without delay.”

Not all businesses are in favour, with property owner Canary Wharf Group leading calls for the consultation period to be extended – Transport for London did so by three weeks – and it circulated an anonymous briefing note warning that the routes would lead to traffic chaos, harm London’s economy and make roads more dangerous for cyclists and pedestrians.

Last week, ahead of the consultation closing, the Confederation of Passenger Transport (CPT) told the London Evening Standard that it was worried about the impact of the Cycle Superhighways on the coach firms among its membership.

Coach operators bring 50 million visitors into London each year including for weekend performances of West End shows, when the vehicles typically park on the Embankment ahead of the return journey.

According to the newspaper, coach parking will be cut by more than 50 per cent to 227 metres once the east-west route along the Thames is open.

The organisation’s coaching executive, Andy Warrender, said:  “CPT UK is extremely concerned that TfL’s proposals for cycle superhighways on two routes through central London could see a reduction in designated parking and pick up and set down facilities for coaches.

“Parking is the number one issue for coach operators in London and TfL’s proposals could see a reduction of around half the available spaces in key areas such as the Embankment.

“CPT also has concerns about proposals for traffic signal phasing, arrangements for segregated islands at some stops, and cycle bypass facilities.

“If TfL’s proposals are implemented, congestion will be worsened and coaches will simply be unable to access some tourist facilities.

“The proposed restrictions on carriageway space may simply make it impossible for coaches to operate in London, denying the capital of the economic benefits they offer,” he added.

CyclingWorks.London’s Kenyon insisted however that opposition to the routes from the likes of Canary Wharf Group was simply a delaying tactic, and that the website demonstrated they had overwhelming support.

“Claims these plans are being rushed through are pure filibuster,” he said.  “The route was revealed in 2013, and will not be delivered until 2016 – three years from drawing board to completion. It’s worth remembering 14 cyclists were killed on London’s roads last year. Stalling for time is something London simply can’t afford to do.

“There’s been a tidal wave of support from companies in London who recognise that these bold Cycle Superhighway plans are not just a good thing for cyclists, but a good thing for the city as a place to employ the best talent and do business.

He concluded: "The Mayor now has a clear mandate to build these bike tracks, it is time for him to get on with it.”