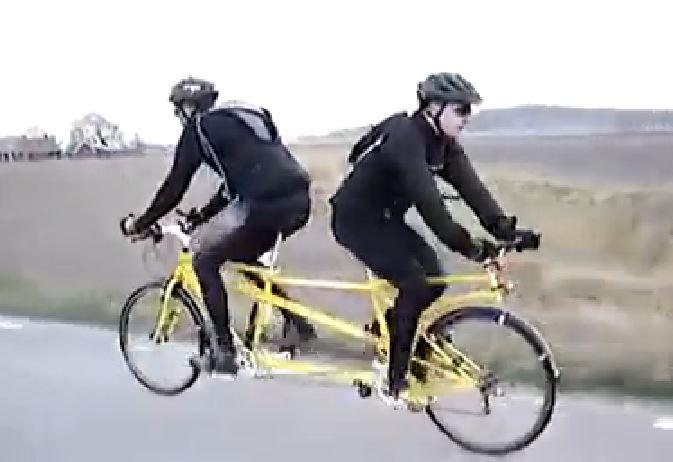 Here’s something we hear about occasionally, but we’ve never seen one on video – a push me-pull you tandem bicycle, in which the riders face away from each other. The riders appear to be pedalling in opposite directions, but the drivetrain is set up in such a way that it propels the bike forward.

The video was uploaded to what purports to be Alberto Contador’s official page on Facebook, although much of the content differs from that on the verified Spanish version.

While there is no information about when or where the video was filmed, one commenter said the owners are from Gothenburg in Sweden, and another linked a newspaper article from 2008 in which what appears to be the same bike was involved in a crash during a race that left an official with a broken leg.

A similar bike was spotted in Adelaide, South Australia a few years back – one contributor to this thread saying he had even seen it towing a shopping trolley.

Here’s a picture of one from Taiwan from a years back in which the riders are shown facing each other – a bicycle made for two, indeed – although it can also be reconfigured for them to turn their backs on each other, in the event that Daisy’s answer is ‘no,’ we suppose.

Most push me-pull you bikes we see are recumbents. This one, by MicWic, was shown at Cycling Las Vegas in 2002.

As for the name, the pushmi-pullyu was an animal with a head at either end of its body, facing in opposite directions, that featured in Hugh Lofting's 1920 children's book, The Story of Dr Doolittle.

In the book it is a "gazelle-unicorn cross" but the 1967 film Dr Doolittle starring Rex Harrison saw it transformed into a double-headed llama.