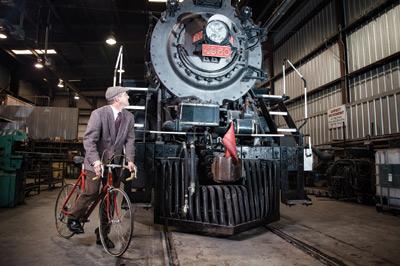 After almost a quarter of a century, the American Man vs Machine race is on track for 2015
by Elliot Johnston

Due to be run for the first time in 24-years, a Grand Canyon challenge race that saw 300 riders race a classic steam-powered locomotive in 1991 is in the process of a revival for 2015.

The Man vs Machine race, which will pit rider against train, is due to take place on September 26 2015, and will feature a special train for the occasion.

Cyclists are set to cover 54 miles of red-stone desert roads from the Grand Hotel in the small town of Tusayan to the Williams Train Depot.

The train’s route runs in parallel to Highway 64 - the road that the cyclists will be riding - starting just north of Tusayan in Grand Canyon Village, which is just on the edge of the Canyon itself, and ending in the Williams Depot around the same time as the cyclists.

Tickets are set to be available for places on the racing train, where passengers will be able to spectate on what organisers hope will be a close-run thing. The regular steam train that attracts tourists to the area will also run over that weekend.

The event’s planners and their sponsors, park and resort management company, Xanterra, have been working in conjunction with the town council of Tusayan to get authorisation for the event, which they had originally intended to run in September 2014.

The race got the go-ahead at the Tusayan council meeting of December 3, and they’ve been working to get wheels in motion ever since.

For the time being, though, the race is still in planning and production, and a website is due to be launched over the next couple of months. Registrations will open around the same time.

But, in the meantime, the town of Tusayan’s mayor, Greg Bryan, spoke to the Grand Canyon News, welcoming the race to his town.

"To me it sounds like a great idea," he said. "Just another reason to have people visit us up here."

'What happened back in 1991?' we hear you asking. Well, we're a little light on information and we've struggled to find any mention of the race online. But, we do know that the race took place in the Autumn of 1991, 300 riders took part and actually beat the steam-powered train. The winner actually finished ahead of the train by a 15 minutes.

But, if any of you lovely readers know any more, or can find the allusive 45-second YouTube teaser that included VHS footage from the 1991 event, please let us know in the comments below.