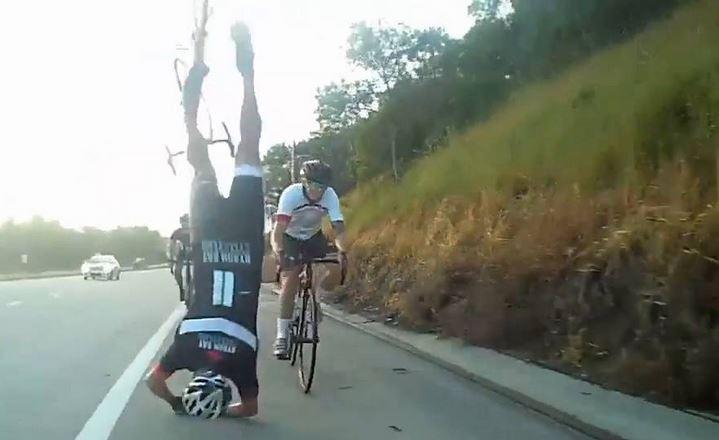 Video - Top skills as riders avoid another who has crashed

Here’s a cyclist who ended up with a bit of a headache – and hopefully nothing else – ahead of the New Year after a piece of debris got lodged in the rear wheel of his bike, sending him flying over the handlebars and landing on his helmet, head-first.

It has emerged that the cyclist involved was 55-year-old Anthony Condon of Byron Bay, New South Wales, who told the Sydney Morning Herald, "I've got the bruised bum to prove it."

"I sort of did the somersault. In no way was this controlled, or managed, or organised. The next thing I was sitting on the road."

Head over Wheels from Cycliq on Vimeo.

There are some top avoidance skills on show from a couple of the riders following Condon, who said, "I was very lucky to not have been badly injured. It was pure luck. The guys behind - it was just incredible evasive response to come around and not run into me."

One Byron Bay Cycle Club member, Adam Taylor, said: "The roads are really bad around Byron Bay and there is debris on the road.

"We always have a camera for insurance purposes, in case of a crash," he added.

Depite his cuts and bruises, Condon was out on a 50km ride with his clubmates the following day. His Canyon bike fared less well however, and he said: "I am sad I lost my racing bike. I might be going bike shopping this weekend."

The clip was uploaded to Vimeo by Cycliq, the Perth, Western Australia-based company behind the Fly6 camera it was filmed on.