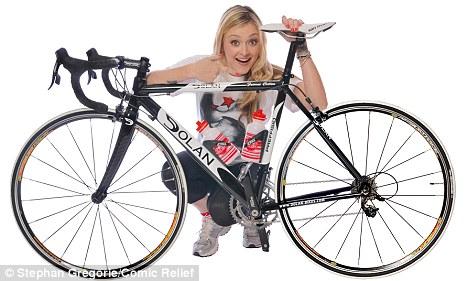 Bring back the stabilisers.....it appears that Fearne Cotton's efforts to get into shape for her celebrity cycle across the UK has hit the buffers, albeit temporarily.

Actually, it was a parked van which bore the brunt of Fearne's efforts to master the art of two wheels as she set out on a ride with comedian David Walliams, in preparation for the John O'Groats to Land's End ride for Sport Relief.

Walliams is the head of a celebrity team preparing to cycle the 1,000 miles from John O' Groats to Land's End next month. Fearne's conversation with the tarmac was captured on video in Marlow, Buckinghamshire - along with a lot of other comedy-style shennigans.

Writing on her blog, she said: 'At the weekend myself and David Walliams, team captain of said challenge, headed out to Marlow where our wonderful trainer Greg lives. He took us on a 90 minute cycle of doom around the local hills.

“I unintentionally dismounted (fell off) twice, and David got four punctures in 90 minutes which I believe is a world record. We look the part in our red shiny jackets and fancy cycling shoes but are generally terrible at cycling. I’m more than nervous about this challenge looming.”

Cotton has admitted she has been struggling with training and finding it exhausting. Her team-mates include Miranda Hart, Jimmy Carr, Russell Howard, Patrick Kielty and Davina McCall