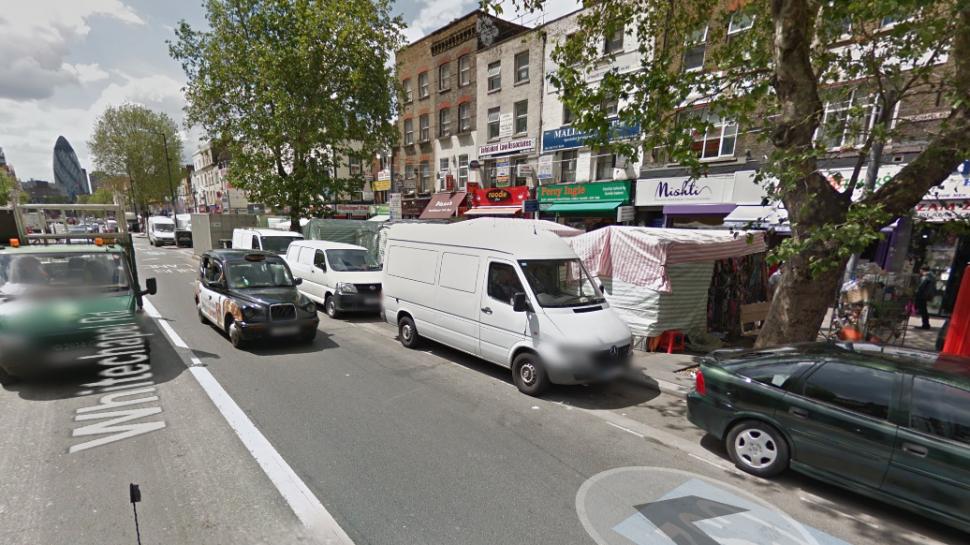 Transport for London slammed for "watering down" Cycle Superhighway 2 upgrade

Cyclists to mix with busses past Whitechapel Market
by John Stevenson

Transport for London (TfL) has announced the outcome of its consultation process for the proposed upgrade to the CS2 cycle route from Bow roundabout to Aldgate along the A11.

The original plans were for bike lanes that were segregated from motor traffic for almost the entire route, but after objections, that segregation has been scrapped where the route passes Whitechapel Market.

Instead, people cycling along the eastbound side of Whitechapel Road will have to mix with buses in a five-metre wide bus lane that includes a two-metre cycle lane.

Lodon Cycling Campaign says that's "a daunting prospect for many people who cycle, or who would like to start cycling". 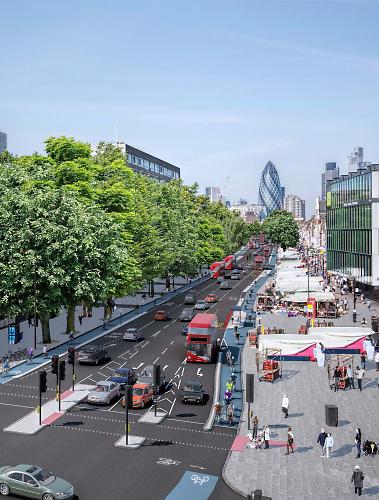 The scrapped proposal for segregated cycle tracks past Whitechapel Market

LCC also points out that there are currently no hours of operation signed for the eastbound bus lane. Other bus lanes in this area operate for three hours in the morning and three hours in the afternoon. The organisation says: "At best there will be minimal benefit for safe cycling for 25% of the day. Parking is allowed from 7pm till 7am."

The consultation has also failed to solve the problem of the gap in the original plans, where CS2 passes the council-owned Ocean Estate, Tower Hamlets Council have invited Transport for London to speak with them about purchasing land to enable reallocation of space for cycling, but at a later date.

LCC's Campaigns Manager Rosie Downes said: "When this consultation opened we welcomed the proposed protected space as long overdue, but we stated that gaps in the segregation, where cyclists are expected to mix with heavy, fast moving traffic, are unacceptable. So we're disappointed to see that rather than addressing this problem, the plans now offer even less protection for cyclists.

"This is a route on which six cyclists have died since it became a cycling superhighway in 2011. The Mayor of Tower Hamlets, Lutfur Rahman, and every other local politician have called on Transport for London to make the upgrade of this route the highest priority. Yet the very same local politicians appear to be blocking Transport for London from making the changes needed to ensure this route offers safe and inviting space for cycling."

Whitechapel Market is believed to have raised concerns about the safety of loading goods across the cycle track, and that the superhighway could negatively impact on their business. However, loading across cycle tracks is a common sight in the Netherlands, and in New York local businesses saw an increase in sales of up to 47% when protected cycle lanes were installed.

LCC has also expressed disappointment that plans for junctions along the route have not been improved.

The campaign group said: "Over 70% of the most serious injury collisions to cyclists in London happen at road junctions. Poor design of junctions, even where there are segregated routes for cyclists, is a serious concern within the current proposals for the CS2 upgrade.

"All cross roads carry cycle traffic and there are some with high numbers of cyclists. At many junctions there are plans for 'early release', letting the cyclists move off before other traffic.

"We consider this is only acceptable on minor roads with little or no turning traffic, and recommended in our response to the consultation that TfL implement cycle segregated junctions, which TfL have previously agreed are 'capacity neutral' so would not cause delays to traffic."

TfL says it received 1,455 direct responses to the consultation, of which 89% supported or partially supported the proposals. There were also 2,215 supportive template emails submitted via the London Cycling Campaign website. With these emails, the support rate was 95%.

1
Cyclist shot by hunter who says he mistook him for a rabbit
2
Car wing mirrors studded with spikes reported to Greater Manchester Police
3
Road rage driver who rammed and killed cyclist and then boasted about it jailed for 10 years
4
Brazilian speedster aims to hit 300km an hour next year to become world’s fastest cyclist (+ video)
5
Mark Cavendish reveals ‘hole behind heart’ after serious crash in Belgium
6
Near Miss of the Day 669: Cyclist confronts driver after 'worst overtake I've ever seen'
7
New Zealand MP goes into labour, cycles to hospital to give birth
8
Cyclist sprints away from knife-wielding mugger – and warns others to be vigilant