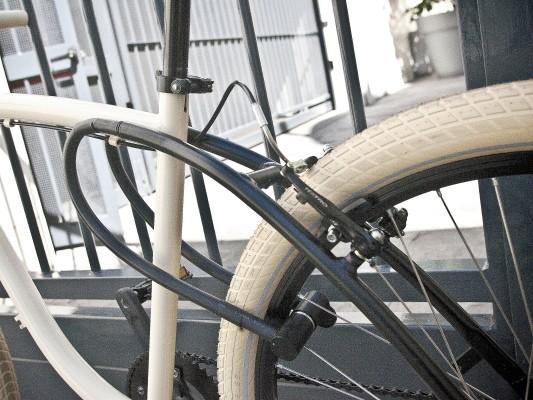 Frameblock – a lock that’s part of the bike

Italian designer, Matthew Diego Caldiroli, has come up with a bike lock which will hopefully dissuade thieves from cutting through it. As it’s a permanent part of the frame, all a thief would succeed in doing is damaging the bike they were trying to steal.

The Frameblock is being marketed by Caldiroli through his Milano Bike business and the premise is a simple one – if a thief has to cut through part of the bike in order to steal it, would anyone still want it?

Part of the bike's frame consists of a thick cable lock with two free ends. These can be fastened around a stationary object – same as any other cable lock – when it is being left, but they are then anchored to the frame while you ride. Crucially, the lock is unmistakeably part of the bike itself meaning any damage to it is also damage to the bike as a whole.

As well as hopefully deterring thieves, the lock is also convenient in that you don’t have to find a way of carrying it while you ride. It is also possible to thread the lock through the back wheel as an alternative means of securing the bike.

The Frameblock continues a recent trend for integrated bike locks. Last month we reported on the Yerka Project. This isn’t just a lock attached to the bike – the bike is the lock. The downtube swings out sideways and then the seat post is removed and used as the third side of a lockable triangle.

The Interlock perhaps has more in common with the Frameblock in that it is a fairly conventional cable lock that is built into the bike. However, while it scores for convenience, it could be cut without ruining the whole bike. As it is only part of the seat post, it is therefore not so obviously a key part of the design.