Figures recently released by the Department for Transport (DfT) forecast more car journeys per person by 2040 with all other forms of travel seeing a drop. The statistics are however based on the National Transport Model (NTM), which has been widely criticised and accused of persistently overestimating future car use.

DfT are forecasting that the average number of annual trips per person by car will rise from 447.6 in 2015 to 507.0 in 2040 with cycle trips falling from 22.1 to 20.5. Oddly, passenger trips by car are also predicted to fall, implying that single occupant driving will become even more common. 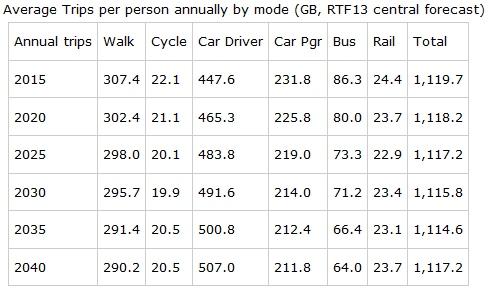 The table above was provided in response to a request from Dr Julian Huppert MP, co-chair of the All Party Parliamentary Cycling Group, on behalf of CTC. Roger Geffen, Campaigns and Policy Director at CTC claimed the figures reflected poorly on the Prime Minister’s promised ‘cycling revolution’.

“These figures show the glaring mismatch between the Prime Minister’s aspiration for a ‘cycling revolution’ and the DfT’s predictions where the ‘revolution’ has failed to start and is even rolling backwards.”

The statistics are however based on the widely-criticised National Transport Model (NTM). Phil Goodwin, emeritus professor of transport at University College London, analysed NTM figures for a 2012 article in Local Transport Today and concluded that “for 25 years car traffic stubbornly refused to behave according to expectations”. The article featured the table below indicating successive downwards revision of the forecasts. 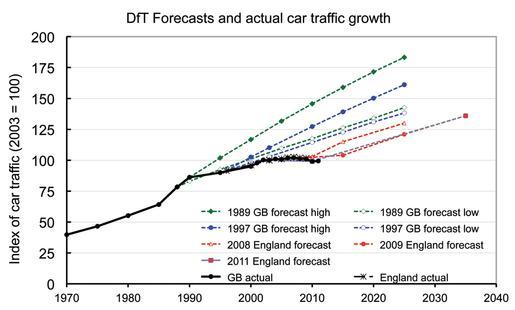 NTM figures also assume no change in government policy beyond that already announced. This means that the department’s Cycling Delivery Plan is not factored in as it is still in development.

So perhaps the picture isn’t quite so bleak. But writing on the CTC’s website last year, Chris Peck highlighted one particular danger. While the NTM is intended to be a guide, it is treated by policymakers as an inevitable outcome to be planned for.

“This is the 'predict and provide' approach that, in essence, is a self-fulfilling prophecy: your model predicts that car use will continue untrammelled, and further predicts huge congestion problems that might result. So, in order to prevent that congestion, you build new roads and plan new developments around everyone driving for 2/3rds of their trips and, decades later, hey presto: that's what happens!”

CTC’s Roger Geffen would like to see the Government taking a different approach.

“Public health professionals are flagging up an obesity time bomb. Big business is calling for investment in cycling. Now is the time for Government to provide the funding, leadership and ambition in their 10 year cycle plan that CTC has long been calling for.”