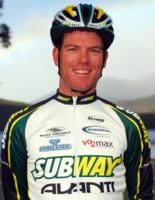 A NEW Zealand Olympic track cyclist injured in a collision with a car says he's 'amazed' at the level of aggression on the country's roads.

Hayden Godfrey, who took part on the 2004 Olympics and has ridden at several Commonwealth Games, needed arm surgery after being hit by a car in Christchurch.

The cyclist was riding towards the city when a car turned in front of him. "I looked down for one second and then I look up and there's a whole faceful of car in front of me," he said.

"There was nowhere to go, nothing to do. I didn't even have time to hit the brakes."

Godfrey had just returned from the world cup meet in Beijing where he was part of the silver medal winning pursuit team.

His left elbow went through a passenger-side window and as his body went over the top of the car, his arm was pulled back, causing a horseshoe-shaped gash that went through to muscle.

Surgeons at Christchurch Hospital removed glass and paint chips from the wound.

Godfrey's helmet and three-week-old bicycle, with just 150 kilometres on the clock, were destroyed. His mother, Jeanne, said the car's driver admitted liability , but she did not know if charges would be laid.

Godfrey, who was wearing green and yellow clothes, said he was travelling at about 40kmh and was not sure if the motorist did not see him or misjudged his speed.

The crash comes as simmering tension between cyclists and drivers around Christchurch threatens to boil over. Last week, a cyclist claimed he was strangled by a passenger in a car that nearly hit him in Dyers Pass Rd in Cashmere. This followed Christchurch businessman Richard Freeman's online vow to "nail" cyclists with his Hummer. Freeman has since apologised for the remarks.

Godfrey said there was a rift between motorists and cyclists in Christchurch, and understanding was required on both sides.

"The cyclist comes off worst. I'm not saying it's always the motorist's fault. The cyclists have got to obey the rules."

Godfrey said he had ridden internationally, and driver aggression around Christchurch never ceased to amaze him