Auto-lacing shoes to become reality if Kickstarter funding is successful

If you’ve been waiting patiently for the day when some clever person would invent auto-lacing shoes, then we have good news, a Canadian company called Powerlace have developed an auto-lacing system that means you’ll never have to tie your laces ever again. That’s if the project succeeds in hitting its $650,000 funding goal on Kickstarter.

The shoes work simply by the user pressing their heel into the shoe, where a  ‘presser’ concealed in the base is affected by the weight pressure and acts as a force sensor to activate the lacing mechanism, and tighen the laces. No bending over required to carefully tie your preferred knot. It's the ‘puller’ device, on the side of the shoe attached to the laces, that is the part that actually tightens the laces, using the tension provided by the ‘presser’. The laces are nylon coated stainless steel wires so they should be durable enough to withstand repeated tightening. 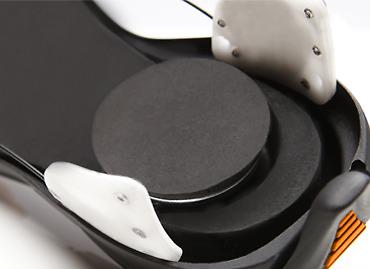 Any child of the 80s will of course be remembering the auto-lacing Nike shoes worn by Marty McFly in 1989 classic Back to the Future II, and the Powerlace looks like the closest offering to that futuristic vision of footwear. In case you don't remember them, here's a video to refresh your memory"

We’re writing about these shoes because we find them fascinating, who wouldn't be, and because there are definitely implications for cycle shoes, maybe not in the near future but certainly some way down the road. A lot of cycle shoes, especially racing shoes, have long since ditched laces in favour of Velcro straps, Boa dials and ratchets, but they still require the tiresome effort of manually tightening them. If the Powerlace is successful, there’s no reason why the technology couldn’t be adapted for cycling and rid the world of straps and ratchets. And that's something we're keen to see.

We could also see shoes equipped with this system being useful to transitioning triathletes and both mountain bikers and cyclo-cross riders who want to easily jettison muddy footwear after a ride.

At the time of writing the project has achieved $36,451 towards its $650,000 goal, with 55 days to go. You can pledge your support from as little as $25 with $175 will you get you the very first pair of Powerlace shoes to roll off the production line - there’s currently 323 left of 500 pairs. They’re estimating delivery as May 2015. Go take a look here www.kickstarter.com/projects/1748376549/powerlace-advanced-auto-lacing-shoe-technology