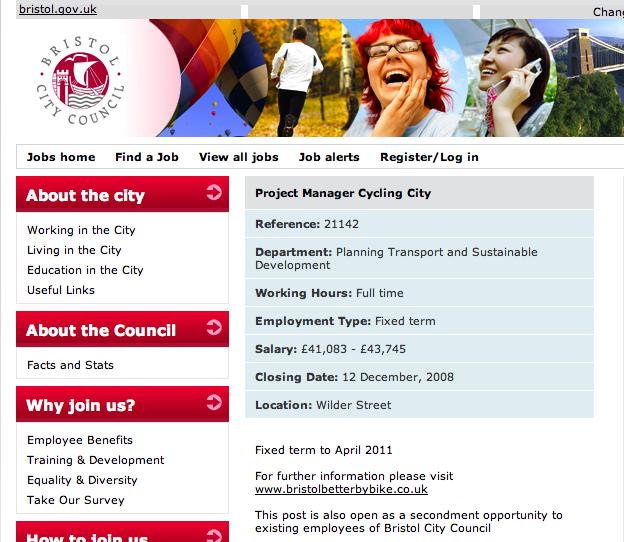 Know how to boost cycling? Bristol needs YOU!

If you think you'd know how to spend £22.8m on cycling the good folk at Bristol City Council would like to hear from you, by Wednesday.

Earlier this year the Bristol was named as the UK's first Cycling City by Cycling England seeing off competition from Leicester, Manchester, Brighton. The title came with a large wedge of government money (£11.4m – the other half has been put up by the council itself) to spend on promoting cycling in the city and surrounding areas. Six months down the line council bosses are still looking for someone to head up the project and the clock is ticking on all that funding which has to be spent by March 2011.

So far there has been a public consultation, followed by a number of complaints that the consultation wasn't public enough and that it wasn't a consultation at all simply the planners telling the public what they were going to do – build two cycle routes from the city centre to Whitchurch and St Werburghs to Lockleaze. Oh, and a hire bike scheme has been set up North Bristol.

The council advert for a project manager to head up its Cycling City efforts pretty much lays that particular criticism to rest because apart from those two routes it would appear they haven't got the foggiest idea what to do with the money… They know where they want to be, they just don't know how to get there.

Which could be where YOU come in. If you think you can oversee the creation of a large network of cycle routes, increase the number of cyclists (not a big ask in the current climate) and double the number of children cycling, then Bristol Councils wants to hear from you. Here's some more details from the ad:

"As a project manager you'll be right at the heart of things," it says.

"You'll be instrumental in establishing Bristol as a beacon for cycling. You'll be involved in showcasing best practice cycling initiatives and it'll be you that helps lead the way in changing attitudes and increasing the number of cyclists on the roads.

"Taking the lead in managing all staff, financial resource, partners, stakeholders and consultants, you'll engage their imaginations and secure their commitment to bring about major change."

Deadline for applications is Wednesday and interviews will be held in January. If you are interested there are more detail on Bristol Council's website.