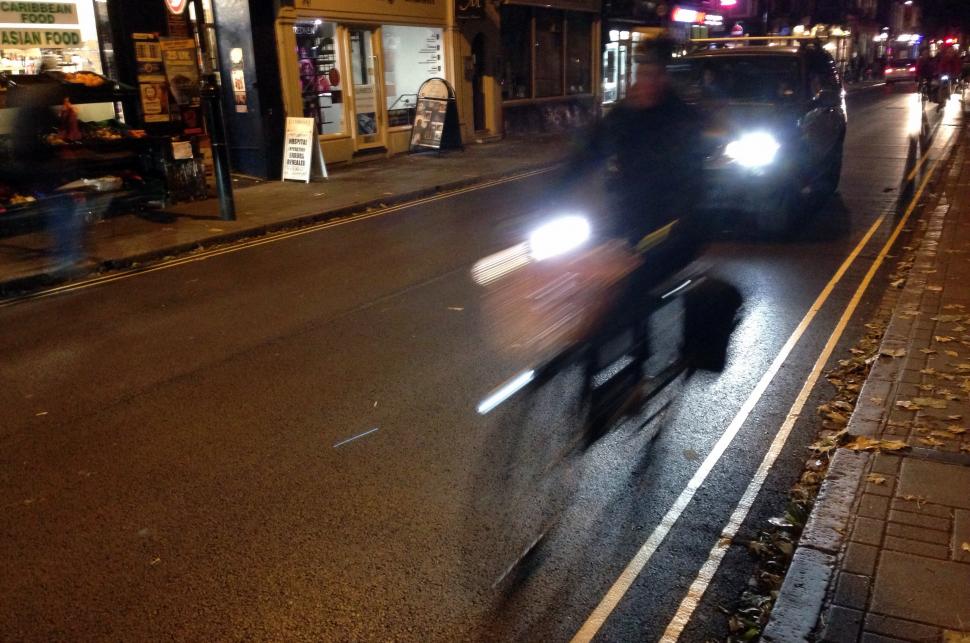 That's the conclusion of a new study by two academics from the Universities of Leeds and the West of England. They set out to find out how much difference road markings make to the amount of space drivers give cyclists when passing, and the speed at which they pass in 20mph and 30mph zones.

Stella C. Shackel of the Institute for Transport Studies at the University of Leeds, and John Parkin, Professor of Transport Engineering at the Centre for Transport and Society, University of the West of England published their findings in the paper Influence of road markings, lane widths and driver behaviour on proximity and speed of vehicles overtaking cyclists.

Using a bike equipped with an ultrasonic distance sensor, the authors measured the passing distance of vehicles, and side-facing cameras were used to measure passing speed. Recording each pass allowed the researchers to determine the type of vehicle and so differentiate between cars, light goods vehicles, heavy goods vehicles and so on.

One of the things they were keen to determine was the effect of centre-line markings. There is already considerable research into the effect of cycle lanes, but very little into how centre lines affect driver behaviour, even though they have been in use since 1914.

A related issue the researchers identify is that standard UK traffic lanes are 3.65m wide, which puts them in what the Dutch CROW road design guidelines call the 'critical' category for combined bike and motor vehicle use. In a 'tight' lane it is not possible for an overtaking manoeuvre to be made without encroaching into the oncoming traffic lane; ‘spacious’ lanes provide for adequate passing distance without having to cross the centre-line.

"A critical cross-section provides sufficient width for drivers to overtake, but in so doing they will leave inadequate distance to the cycle user they are passing," they write.

Adequate distance means leaving enough room that the rider isn't buffeted by the vehicle's slipstream, and also that they're not scared witless by the classic 'close pass'. The researchers talk of a bike's "kinematic envelope" which they say "is wider than its physical size, and a buffer zone beyond the kinematic envelope is needed for safety reasons and to limit the feelings of danger resulting from closely passing motor traffic moving at a different speed."

One researcher then rode round a circuit near Liverpool recording driver overtakes and taking notes on a dictaphone.

After analysing the data from several hundred passes, they concluded: "Cycle lanes have no beneficial effect on passing distances and speeds. Taking these measurements as proxies for expressions of the comfort of cycling, we might then suggest that alternatives to providing space for cycle traffic are required, such as greater degrees of separation from the carriageway."

That pretty much confirms the conclusion anyone who's ever used a painted bike lane has probably already formed, but this paper should be useful ammo for cycle campaigners trying to convince planners that paint really isn't enough.

On centre-lines, they write: "If lane widths are insufficiently wide, then the removal of the centre-line would assist as this has the effect of creating slower overtaking speeds. Removal of centre-line markings would therefore be a very cost-effective way of increasing the level of comfort for cycle users."

Academic measurements are all very well, but does that work in the real world? Cambridge is currently finding out. Mill Road, a shopping street to the south-east of the city, has recently been resurfaced, but its centre-lines have not been restored.

Incidentally, if anyone wants to build their own distance sensor to prove that someone really has passed too close, University of Bath researcher Ian Walker has publishd his design on his website.