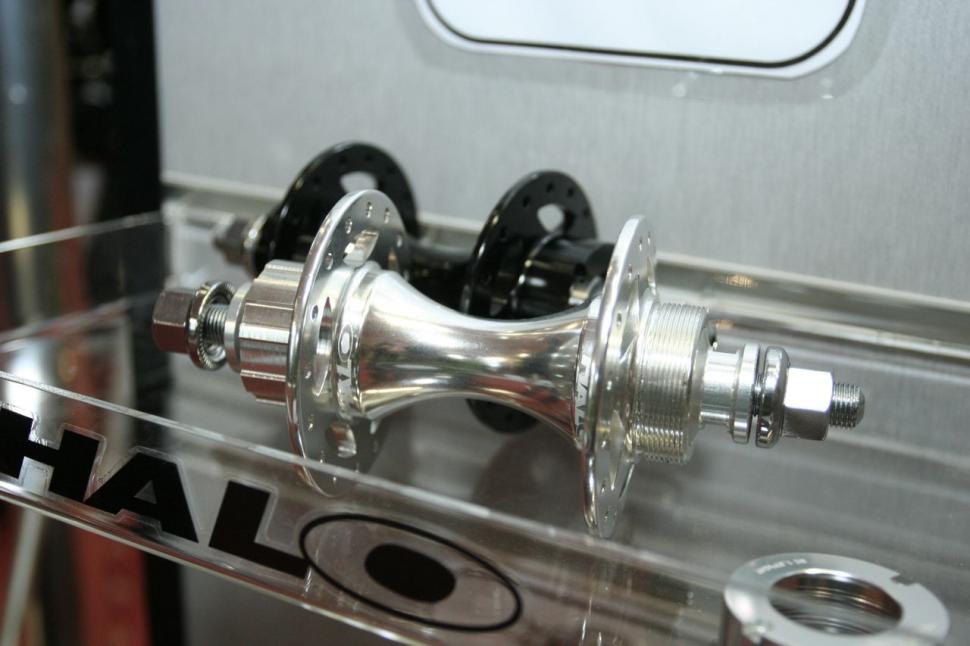 Our first bits and bobs roundup from Silverstone
by dave atkinson

You can't move for interesting bits and bobs at your trade shows, and CORE Bike is no exception. There was plenty of stuff we'd seen before but also some shiny new things, so sit back and let us tell you all about them. From seatposts to sprockets and racks to reads, there was something for everyone.

First up are O-Synce, who you probably haven't heard of - we certainly hadn't. Anyway they're a German bike computer manufacturer and they were showing off some interesting stuff. The Mini was a Cateye-Strada-esque unit with the whole unit as the button, so you just tap it to scroll through the functions. 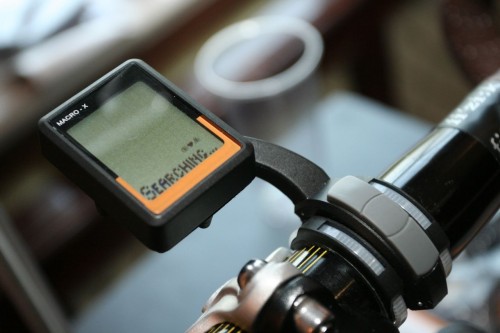 More interesting that that though was the Macro, which mounts on a kind of stalk, the better to be in your field of vision, and the buttons aren't on the computer at all: they're either in the mount, or – more interestingly – on a remote control that you can fit next to your grip on flat bars. Ostensibly aimed at mountain bikers – who might balk at a computer that's sitting proud of the bars – it'll surely find favour amoung the legions of flat-bar-hybrid-riding sport commuters out there. There's no drop bar remote as yet. The Macro is modular, so once you've chosen your basic computer – wired, analogue wireles or ANT+ transmission, with or without an altimeter – you can add other bits – cadence, HRM, power sensor, PC interface – on top. The computer has all the functionality built in. Good news if you want to build up your system over time. You can also buy the system as a watch, and add a foot pod for your running. 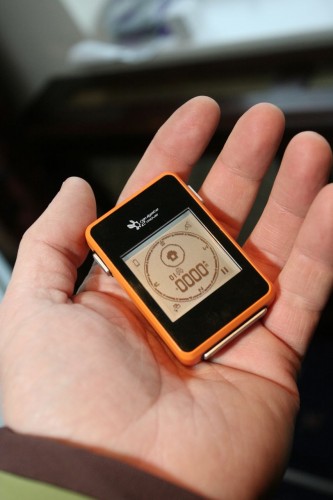 The O-Synce man also had a prototype of their new GPS-based comuter which will allow you to create tracks on a Google-Maps-based program on your PC and upload waypoints and instructions to the head unit. There's no mapping, just an arrow telling you which way to go and your instructions falshing up when you reach a waypoint. It also has a trackback function to help you find your way home. RRP is likely to be around £120 with a weight of 45g. The planned release date is April.

What O-Synce didn't have on show was their pedal-based power measuring system, which introduces a strain gauge in each pedal (the first pedals are likely to be Look compatible). You can not only monitor the power output but also where the power is applied in the pedal stroke and which leg is stronger, a bit like the Wattbike. The analytic functions will be built into the next version of the Macro computer.

They're also working on a cap with a head-up-display for running, so you can "look up in the sky and see your pulse rate". No release date for that though... 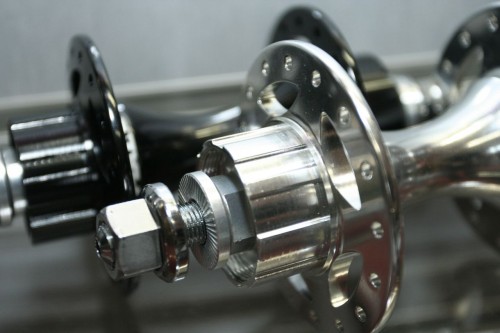 Halo had some new bits and bobs on their stand, the most interesting being the Fix-G hub. This has a standard thread on one end, but the other features a short – and fixed – hyperglide spline pattern. This allows you to use any HG-compattible sprocket, although Halo recommend the wider-based cogs from the likes of Surly to guard against chewing up the Aluminium splines. The system uses a standard lockring and allows a degree of chainline adjustment using spacers. It's a very neat solution made neater by the fact that halo are now offering thread covers in a range of colours to hide that unsightly thread on the other side if you're not using it. Tidy. 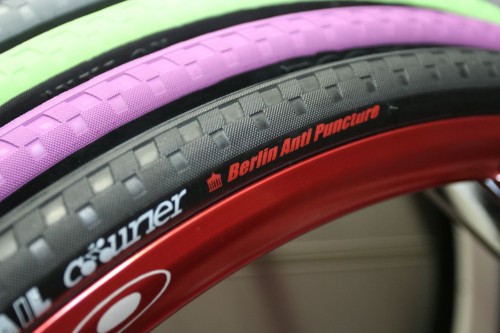 The Halo Twin Rail Berlin anti-puncture tyre has a good story behind it. Halo received a pretty damning report of their standard Twin Rail tyre from a Berlin courier – not that we'd agree here at road.cc towers, it's a cracking town tyre – that slated said hoop for not being durable and pucture resistant enough. Quite what he was riding over wasn't clear, but instead of retreating to the office to fume and throw darts at a picture of the Brandenburg Gate, the boys at Halo set about making a heavy duty version of the Twin Rail, with a 29mm casing and a puncture strip three times as thick. The resulting rubber looks set to be a cracking hardcore urban choice, we'll let you know when we get one in. 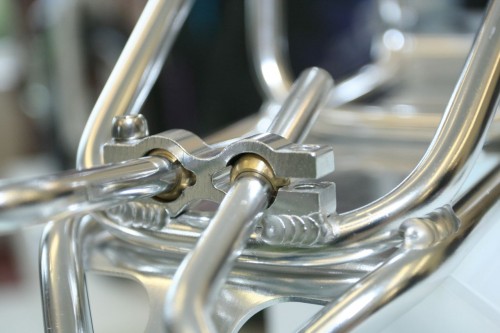 Lezyne came down to see us not so long ago and brought most of their new stuff with them, but we hadn't seen their Power Rack Elite, possibly the most macho name for a rack yet. Anyway it's a burly bit of kit, and it's got some really nice touches too, nost nice being the articulated arms which use a little ball and socket joint. Very clever.

Also new was an expandable rack bag with fold-out mini panniers, basically Lezyne's take on the Agu Yamaska but that's no bad thing. The side pocket capacity is a bit bigger, and there's a meaty hook to fix the drop-down sections to your rack. 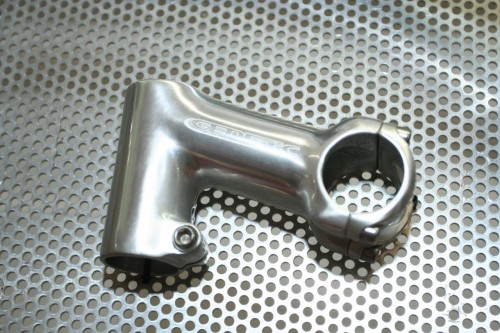 Like to run an aHead stem but don't like the thought of all those spacers? looking for something that looks a bit like a quill stem? enter Genetic, who had this new stem on display, complete with jaunty retro angle and 1980s semi-brushed finish. It's not quite a Cinelli 1R but hey, it's a start. 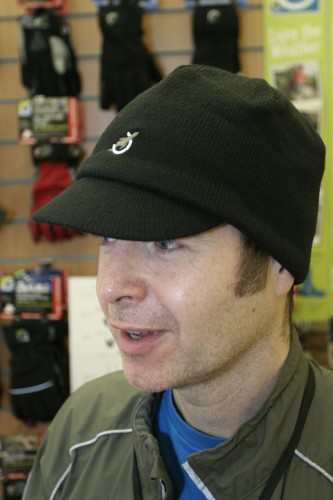 Software-wise, Seal Skinz were busy introducing everyone to their new waterproof beanie and peak beanie. The hats are knitted on the outside with a microfibre lining – very snug – and there's a membrane in between to keep the elements out. Looks like a winner if you're not a halmet devotee and you want to keep your bonce warm and dry. Thankfully it doesn't make you look like a medieval peasant either, unlike some of the hat's we've seen recently. Seal Skinz are notorious for making their staff stand in a tray of water for the duration of the Eurobike show to show how waterproof their socks are; luckily for the CORE crew, there was no stand-on-your-head edict.

That's all for now - stay tuned for more from CORE!