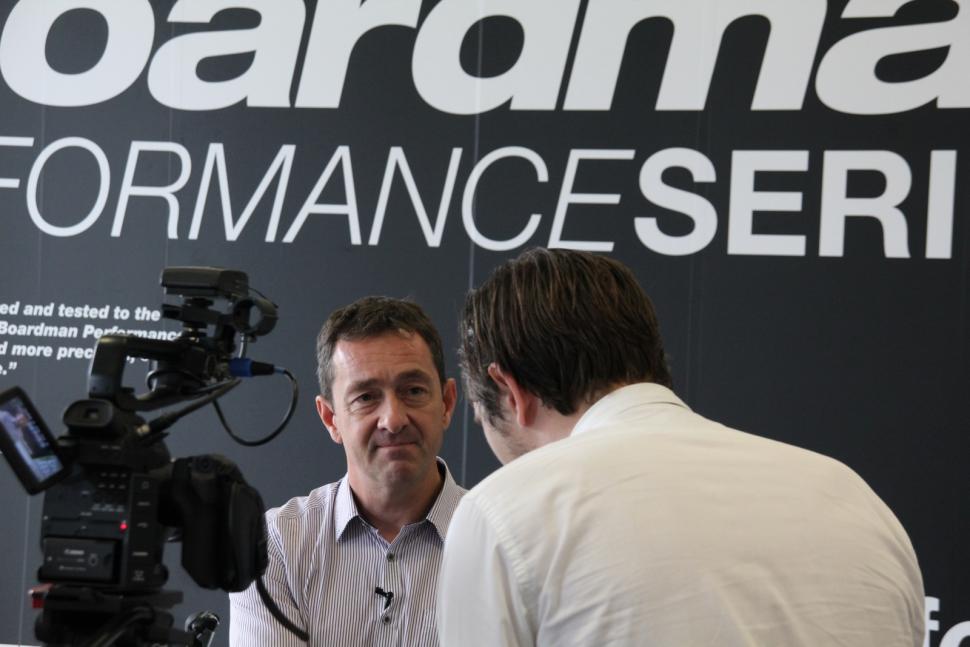 Chris Boardman’s appearance on BBC Breakfast this morning has provoked a flurry of complaints about his not wearing a cycle helmet – even though the segment began with him explaining why he chose not to do so. In a detailed explanation this afternoon, Boardman says that while the reaction was "understandable," it is also "unfortunate because it obscures what I believe are the real issues."

The early morning TV show is featuring a report on cycling each day this week. It is broadcast from Salford, close to the Manchester headquarters of British Cycling, where former Olympic champion Boardman is policy advisor.

Prior to going on a bike ride with him, presenter Louise Minchin asked Boardman, “Viewers will notice I will be wearing a helmet but you won’t. Why not?”

He replied: “It’s a very long answer and more time than we’ve got here," before summarising his position briefly.

“It discourages people from riding a bike, you’re as safe riding a bike as you are walking, statistically, you’re much safer than you are going in your own bathroom and you don’t wear a helmet there," he explained.

“There’s absolutely nothing wrong with helmets, but it’s not in the top ten things that you can do to keep safe.

“We’re going to look at all of those things, but for me, I want bikes to be for normal people in normal clothes.

“About 0.5 per cent of people wear one in the Netherlands, yet it’s the safest country in the world,” he added.

“There’s a reason for that.”

Despite his explanation, the backlash on social media was predictable, many pointing out that the Netherlands already has the type of infrastructure that Boardman and others are campaigning for in the UK.

One Facebook user, John Stimpson, said: “Chris Boardman wearing no helmet and riding in black jacket and jeans. For an item on cycling safety you can't get more stupid.”

Another, Toni Smith, said: “How can you show a piece about cycling safety when the ex-champion is not wearing any safety gear? This is not acceptable! Please in the future choose an ambassador who practices what they preach!”

Many others leapt to his defence, however, with Morgan Lewis saying: “For all those people expressing outrage, I wonder if you have spent the same amount of time looking at the evidence about helmets over the years as Chris Boardman has. His view is not idly held. There is a lot of knee-jerking in these comments.”

Jonathan Richards pointed out: “About two thirds of fatalities WITHIN cars are caused by head injuries - why not a call for compulsory helmets for those travelling in cars? And as for pedestrians ....”

Meanwhile, Chris Myrie couldn’t resist asking: “Does this mean his £80 endorsed helmets from Halfords are useless?”

There was a similar division in reaction to his comments on Twitter, where Boardman himself tweeted this morning after the show: “Hi All, rather than try to address the helmet debate (again) I'm going to pen something for people to read and point you to it this PM.”

That response has now been published on the British Cycling website. Boardman acknowledged the BBC Breakfast piece had “got a lot of people fired up,” and that “my riding a bicycle in normal clothing, looking like a normal person was greeted by some with cries of horror. It’s both understandable and unfortunate because it obscures what I believe are the real issues.”

Foremost among those issues is why some cyclists in the UK believe they should have to wear a helmet while cycling in the first place, he said.

“People wear helmets and high vis as they feel it’s all they can do to keep themselves safe. It shows just how far away Britain is from embracing cycling as a normal and convenient form of transport,” he added.

Pointing to the example of Utrecht in the Netherlands and providing a link to a video of people cycling there he went on: “I’m willing to bet that even those that swear by helmets and high vis would feel comfortable discarding their body armour in such an environment. And that’s the point; in Utrecht they have addressed the real dangers to cyclists.”

While he admitted that the situation in the UK is vastly different, he said helmet compulsion was not the answer, citing drops of between 30 and 50 per cent in countries such as Australia and New Zealand that had introduced such legislation.

Boardman said he understands “exactly why people feel so passionately about helmets or high vis,” and “why people wish to use them,” but said he would not promote helmets or hi-vis nor be drawn into a debate on a topic that he considers “isn’t even in the top 10 things that will really keep people who want to cycle safe.”

He added: “I want cycling in the UK to be like it is in Utrecht or Copenhagen and more recently New York City – an everyday thing that people can do in everyday clothes whether you are eight or 80 years old. I want cycling to be a normal thing that normal people do in normal clothes. Is that wrong?”

In the BBC Breakfast report itself, Boardman outlined his top tips for cycling safely including planning your route, how to negotiate junctions and roundabouts safely, road position, stopping at red lights and giving large vehicles plenty of space and not going up the left-hand side of them.