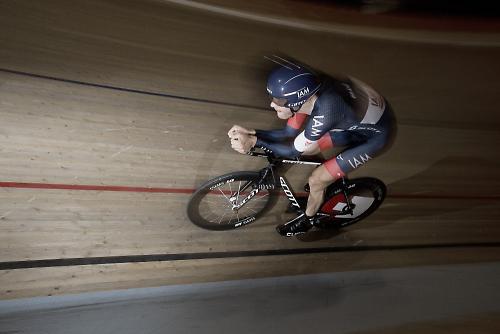 Matthias Brändle is the new holder of the Hour Record, this evening beating the distance set by Jens Voigt who earlier this month became the first rider to attempt it after the UCI changed the rules earlier this year.

The Austrian 24-year-old went off quickly, averaging more than 52kph early on, dipping below 52kph in the latter half of the ride. However, he did enough to set a new benchmark - ratified by the UCI - of 51.852 km, a distance of 742 metres beyond the 51.110 km set by Voigt last month.

Riding a Scott Plasma 5 - read our report on the bike here - unusually, Brändle's attempt was undertaken on a 200-metre track, at the UCI's World Cycling Centre in Aigle, Switzerland, rather than the 250-metre one that is the standard for the world championships and Olympic Games.

Speaking afterwards, Brändle spoke of the difficulties both physical and mental that he had to overcome during his ride:

“In the first few minutes I just wanted to get on with it but then it became more complicated. Between 30 and 50 minutes was the hardest and I asked myself ‘why did I choose to do this kind of event?’ Then in the last 10 minutes, it’s the mental that takes over and with the amazing crowd behind me it was easier. Now I am really happy.

Brändle also thanked the UCI for the rule change that allowed him to tackle the record on a bike he was used to riding:

“I think it was good that the UCI updated the rules (for the UCI Hour Record). It meant I was able to use almost the same bike as I used (for the time trial) at the Road World Championships. It’s a really good change.”

UCI President, Brian Cookson was fulsome in his praise for Brändle's record breaking ride, all the sweeter for the UCI for taking place in it's own velodrome:

“What Matthias has just achieved is a tremendous accomplishment. He is the first rider to come so close to the 52 km mark. It’s a very special moment for cycling and for the UCI Hour Record.

“I would like to thank IAM Cycling and Scott for taking up this challenge and I congratulate them for their excellent preparation, which has resulted in this new feat.

“A performance such as this showcases our sport in the best possible way, and it was a source of pride to be able to host this event at the UCI World Cycling Centre in Aigle.
   
“The UCI Hour Record is an example of our sport in its purest form, with the riders really putting themselves on the line. I believe it is one the hardest goals to achieve requiring perfect preparation and focus.

“Cycling must adapt to the times, and this is why we wanted to modernise the rules of the UCI Hour Record. It is wonderful to have been able to witness two such feats within the space of a few weeks. It is also proof that this record is now fully reinvigorated.

“Finally, I hope that the achievements of Jens and Matthias will inspire other great riders to attempt to beat one of the most challenging records in our sport.”

That wish is likely to be granted fairly soon with the last three winners of the world time trial title - Sir Bradley Wiggins, Fabian Cancellara and Tony Martin - all having said they may attempt the record. So it could be that the Austrian rider's record won't last for long.

Voigt himself when he became the first man to break the record under the new rules last month said he didn't expect his mark to last for long.

However, both he and Brändle have now got their names into the record books in an event that looks set to be restored to the prestige it enjoyed duirng the 1990s when the likes of Chris Boardman, Graeme Obree, Francesco Moser and Miguel Indurain all vied for supremacy.