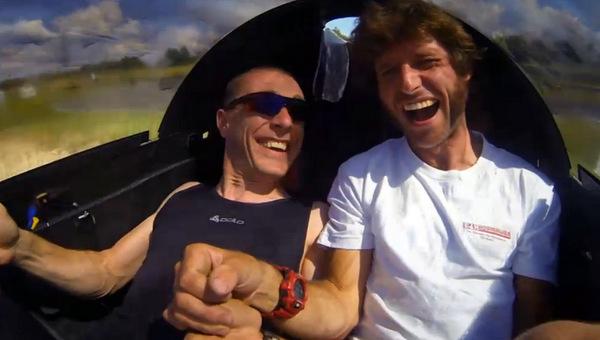 "A challenge with a bit of a twist" for cheerful moto madman...
by John Stevenson

Motorcyclist, bike rider and junior national treasure Guy Martin returned to our TV screens last night in a new series of Speed and in the first episode took on the record for the greatest distance ridden on a tandem in 24 hours.

Martin's no stranger to 24-hour racing on motorbikes and mountain bikes. For the tandem attempt he teamed up with 24-hour solo mountain bike racer Jason Miles and enlisted the help of bike designer Mike Burrows, Team Sky nutritionist Nigel Mitchell and others.

"I always like a challenge with a bit of a twist," says Martin at the start of the show. "I don't want to do the norm. I thought a tandem would be summat a bit different wouldn't it?" 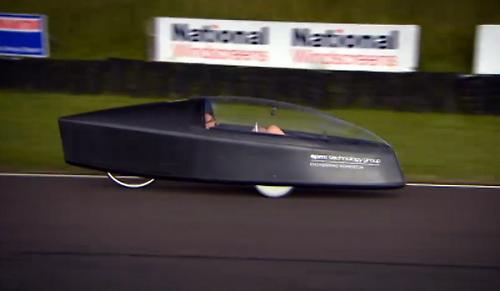 The target Martin and Miles set themselves was 505 miles, the mark set by American ultra-distance racers Rich Fedrigon and Byron Gremley in 1990.

On the way to the attempt they have to figure out what sort of bike to ride and solve the problems of cooling, nutrition and hydration for what they intend to be a non-stop effort.

Burrows convinces them they'll be a lot faster on a recumbent and he and fellow human-powered vehicle legend Miles Kingsbury cook up a dramatic side-by-side recumbent trike with a fairing that puts Martin and Miles under a vast bubble canopy.

On their first outing, trying to go round the Goodwood motor-racing track as fast as possible, they miss a corner and end up in the weeds.

"I wanted them to go steadily," says Burrows, "and they didn't. They're nutters. What they did was go as fast as they bloody well could."

At this point purists will start to gnash their teeth a bit as the Fredrigon and Gremley record was set on a conventional tandem, not any sort of recumbent. But treat the whole thing as a made-for-TV boys' own adventure and enjoy the sheer determination and good humour of all involved and it's great fun TV.

The choice of a recumbent trike as the record attempt vehicle brings its own set of problems. How do you get food into the bubble? How do you stay cool in the summer sun while pedalling a flying greenhouse? How do you have a wee?

Ingenuity and experimentation solve the problems to one degree or another, only for another, completely uncontrollable problem to loom: the weather. The record attempt is set for the weekend of August 10 and the tail end of hurricane Bertha is confidently predicted to clobber the South of England.

Do our heroes break the record? Can they conquer the weather, stand 24 hours in ultra-close proximity and beat the chafing of continuous pedalling?

You can find out for yourself on the Channel 4 catch up service. It's well worth 50 minutes of your time.

Here's the trailer for the series: