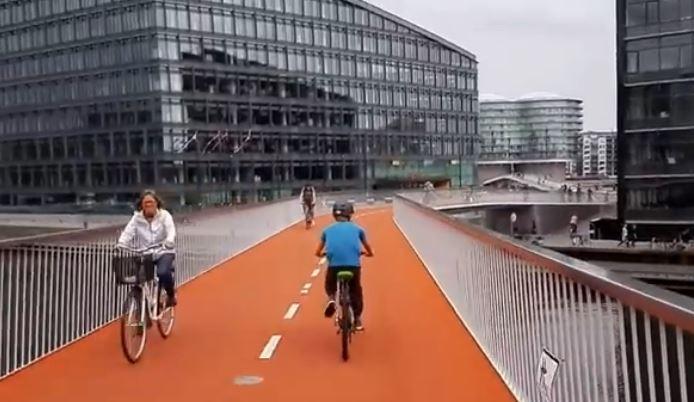 Problem costs insurers more than £20m a year - but it seems often it's people 'borrowing' a bike to get home...
by Simon_MacMichael

One in six people living in Denmark admit having stolen a bicycle at some point – although another interpretation may be that in many cases they ‘borrowed’ it, then neglected to return the bike to where they found it afterwards.

The startling finding from the country which through infrastructure such as Copenhagen’s Cykelslangen, or ‘cycle snake’ bridge, pictured above, is the envy of cycle campaigners worldwide, comes from a YouGov poll carried out for Danish insurance company, Alm. Brand, reports The Local.

It doesn’t seem that armies of Danes are going out equipped with bolt-croppers with the intention of finding a bike to sell at Copenhagen’s equivalent of London’s Brick Lane market the following weekend, however.

Instead, it seems that often people, and youngsters in particular, are using a ‘borrowed’ bike to get themselves home after a night out – perhaps aided in their ability to do so by the fact, as reported by BBC News last week, that bicycles in Copenhagen are rarely secured to a fixed object, as they might be in other cities.

Alm. Brand spokesman Mikael Sundby told Metroxpress: “I don’t think cycle thieves think about the consequences for the individual [bike owners] or for society. They probably just think that it’s merely a bike that can be easily replaced.

“But it’s not pocket change that our society is losing every day, and it is frustrating for those it affects.”

Where someone does avail themselves of a bike temporarily, it doesn’t seem that they then return to put it back where they find it, and with 200 bicycles stolen a day in Denmark – and fewer than 1 per cent of cases resulting in criminal charges – the problem is costing the county’s insurance industry 200 million kroner (£21 million) annually.

Professor of law Sten Schaumburg-Müller told Metroxpress: “There are many people who at one point in their youth have stolen a bicycle late at night to get home from a night out. And maybe they’ve stolen a bike that looked a little bit run down.

He added: “Bike theft is something that is difficult to solve. But it’s also clear that if an area is consistently under-prioritised, that will have an effect on the magnitude of the problem.”