Bradley Wiggins did not successfully defend his Tour of Britain title this year, but he did win the time trial around central London with ease, and he did it aboard this custom painted Bolide. Some thought Wiggo might ride the same custom black and gold Olympic themed Bolide that he used at the Tour of California for the rest of the season, but since winning the British national time trial in June an updated paint job was clearly needed to reflect that. 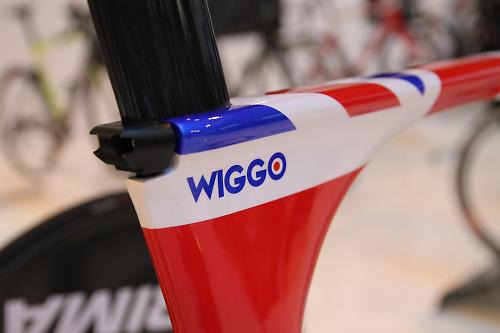 Wiggo also used a bike very similar to this, with the same unique paint job, for his commanding ride in the World Championships earlier this week. Well almost the same bike - the eagle-eyed might have spotted he appeared to be using a Dura-Ace 7900 driveside crank with non-standard chainrings in the World Champs, presumably so he could go larger than the stock 53-tooth chainring? 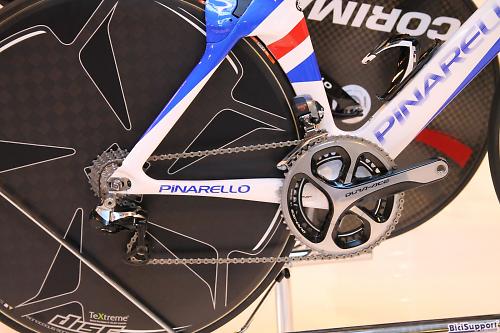 This however is the bike he rode for the less demanding parcours of the Tour of Britain time trial. He used a Shimano Dura-Ace Di2 groupset with a standard 53/39 chainset and 11-25 cassette. There is a Stages power meter on the non-driveside crank arm delivery power data to his Garmin Edge mounted between his handlebar extensions. 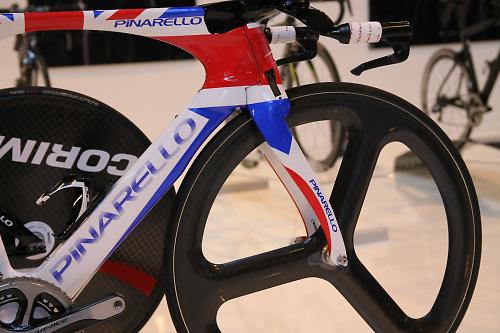 The bike here isn’t sporting the same wheels that Wiggo used in the actual time trial. The PRO TeXtreme disc wheel is the same, but he used PRO’s brand new three-spoke aero wheel at the Tour of Britain, but this here is the HED three-spoke that he and many of Team Sky have used in the past. Wiggo also used FMB tubular tyres with an amber sidewall in the Tour of Britain (and World Champs), not these Vittoria with their black sidewalls. We guess Team Sky must have kept those race wheels back and put in some older rolling stock for the Cycle Show. 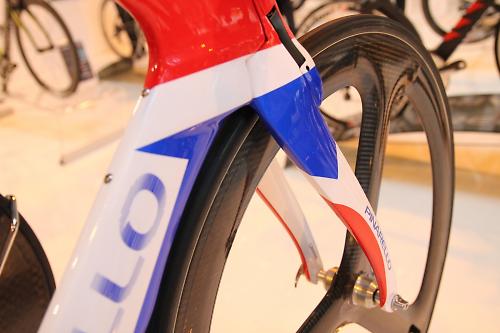 The Bolide was introduced in 2013 and Wiggo first used it in the Giro d’Italia time trial that year, replacing the Graal that the team previously used for races against the clock. Pinarello claim the Bolide is 15% more aero and 5% lighter than the Graal. 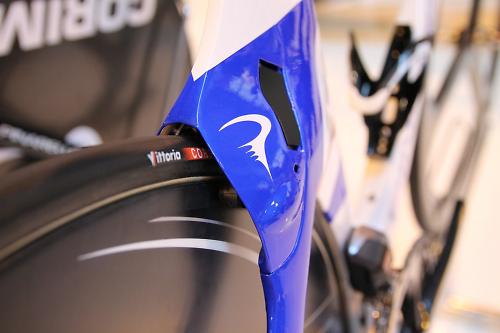 The new Bolide ushered in a load of changes to achieve those claims. They use a new airfoil tube shape for the main tubes sections and both brake calipers are concealed behind fairings, at the front of the fork and top of the seatstay. That’s the sort of design feature you’d think the UCI wouldn’t allow but they’ve been okay with it. 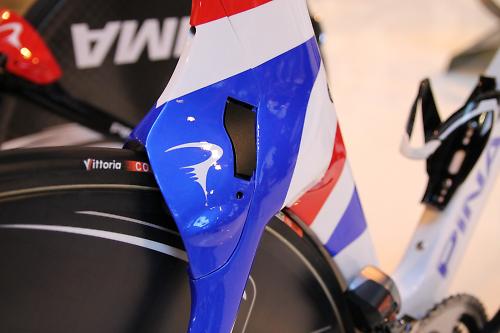 This bike is running a Dura-Ace Di2 groupset so it’s easy to conceal the wiring inside the frame, and through the integrated handlebar and stem assembly. The integrated handlebar and stem is a key feature of most top-end time trial bikes these days - you only need look at the other time trial bikes being used in the pro peloton to realise they’re adopting a similar design approach. It keeps the front-end low and very compact, minimising the frontal surface area. 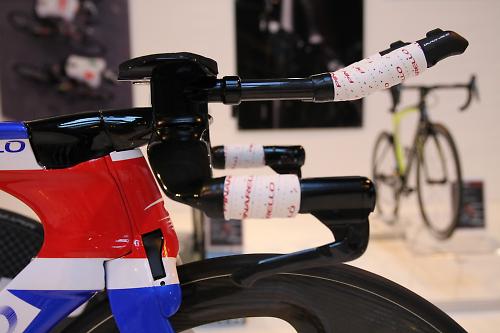 Using the Di2 groupset allows the shifter controls to be cleaning integrated into the handlebar and extensions. The battery and electronic control box for the groupset are tucked away inside the frame, maintaining the clean lines that are so important with time trial bikes.

More from the Cycle Show 2014 soon. If you're planning to go and you haven’t booked your ticket yet, you can get a £1.50 discount by using the code RCC when you buy your tickets online at the www.cycleshow.co.uk website.