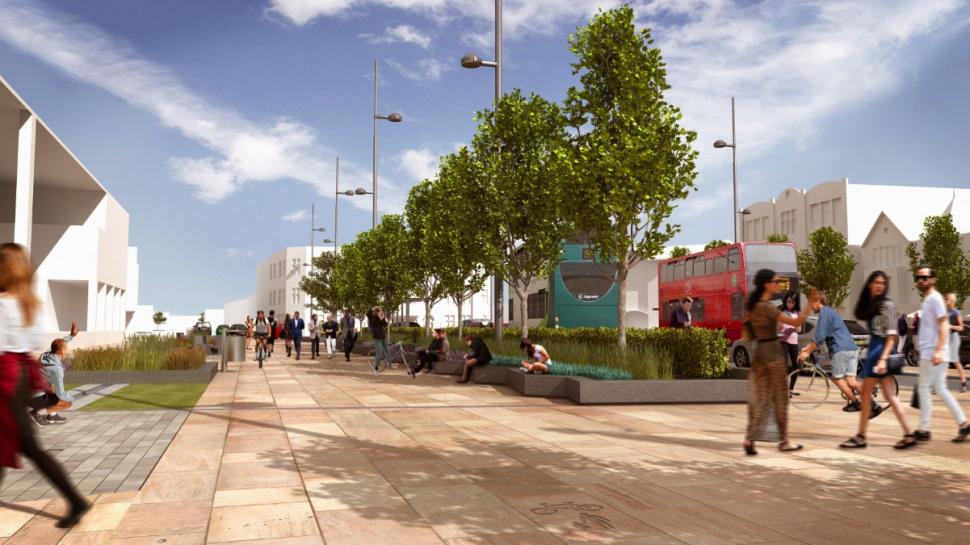 Cycle campaigners have rubbished plans to incude large amounts of 'shared space' in the redevelopment of Oxford's Frideswide Square.

Plans to convert the congested traffic hub into a more attractive public space have been a cause of controversy for years. Oxfordshire County Council's latest scheme is no exception.

This time the debate is over sections of pavement at Oxford train station that have no clear provision for cyclists.

Graham Smith, south-east councillor for cycling charity CTC, said: "After two years or so there has been no improvement in the proposals beyond the 'shared space', whereas the 2012 proposal had been to 'accept' that cyclists would use the 'footways' without permission. But real journeys have not been accommodated.

“I predict that the flow of people cycling is such that it will be unacceptable in an undefined shared space."

A submission by Mark Treasure of the Cycling Embassy of Great Britain said: “Appropriate, inclusive design for cycling, along a road like this one, should involve dedicated cycle provision, separated both from the carriageway and from footways.

“However, this scheme expects people either to cycle in the carriageway – not a realistic or enticing prospect for the vast majority of the population on a road carrying well over 10,000 vehicles a day, including many buses – or, more likely, to cycle on busy footways shared with pedestrians.

"There is a large amount of space available here that could be put to much better use. A scheme fit for future growth in cycling (to say nothing of existing demand, to and from the railway station) has to involve wide cycle tracks, separated from the footways by shallow, chamfered kerbing.

"These cycle tracks should pass behind the bus stops in the square, with clear crossing points for people accessing the bus waiting islands. This 'bypass' design - common in contintental Europe, and increasingly employed in new schemes in Britain - should be standard practice for a scheme like this one."

The Oxford Times reports that Oxfordshire County Council has started work on the £5.5m redevelopment, to be completed by December 2015. 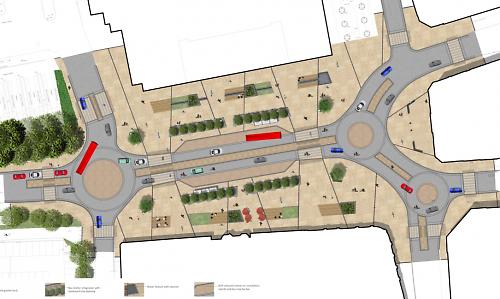 Its three roundabouts, intended as an improvement over the present traffic lights, have also raised the ire of cycling campaigners.

Treasure said: "Cycling is simply ignored as a mode of transport at the roundabouts that form the junctions in this scheme, with no obvious passage through them for people already cycling on the footways, except (circuitously) around a series of suggested zebras. There should be clear paths for cycling through these junctions, separated from motor traffic, with perpedendicular crossing points on the arms of the roundabouts.

Smith said: "There is not adequate consideration or provision at the corners of the roundabouts. In many cases there is a general narrowing at the apexes, but this space could be used for segregated provision as has already been proposed for George St/Worcester St junction."

Council spokesman Paul Smith said: “We’ve had numerous discussions with cycle groups throughout the planning of this scheme and listened carefully to concerns.

“One of the most important things we’re trying to achieve is to keep vehicle speeds down to enable the whole place to feel more welcoming for pedestrians and cyclists as well as helping to keep traffic flowing more smoothly than now.

“If we provided cycle lanes on the road, the width of the road overall would increase to the point where we feel that vehicles will start to travel at higher speeds. This would make things less pleasant for pedestrians and cyclists.

“We have heard that there are still people who may not want to cycle on the road in Frideswide Square even if speeds are low and that is why we are proposing that some space in the paved pedestrian area of the square is shared between cyclists and pedestrians.

“We are happy to continue talking to cycling groups.”