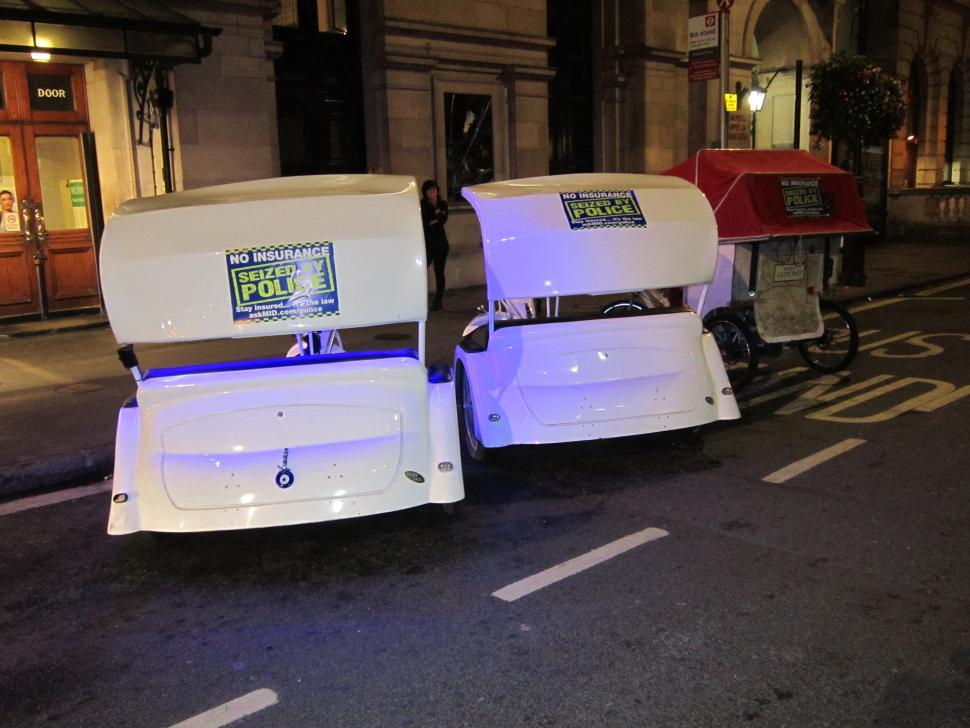 The Metropolitan Police say they have seized nine pedicabs that had been fitted with motors to make them go faster – and which due to their weight are therefore classified as motor vehicles. The news comes as concerns continue over the safety of the vehicles – commonly referred to as rickshaws – with a report earlier this year recommending drivers should be licensed.

Officers from the Metropolitan Police Service's Roads and Transport Policing Command inspected 50 pedicabs during the operation which took place on 5 and 6 September. They found that none of the drivers of the nine vehicles adapted with motors had driving licences or insurance, and vehicle excise duty had not been paid on any of them.

The owners of two of the pedicabs were fined £200 and received notices of six penalty points, while seven others were reported for summons, Meanwhile, one driver was discovered to be disqualified from driving and will appear in court.

Superintendent Rob Revill of the Met’s Roads and Transport Policing Command, said: "Operations checking pedicabs that have been fitted with electric motors like this will continue to prevent collisions, as well as reducing the anti-social behaviour associated with obstructing pavements and roads.

"These vehicles have historically fallen outside of the insurance legislation, leaving the public passengers using them exposed to higher levels of risk."

In June, the London Evening Standard reported that a Law Commission report had recommended to the government that drivers of pedicabs should be licensed and subject to strict safety and training standards, with local authorities given powers to ban those who fail to meet national safety standards.

Reacting to that report, Mark Field, member of Parliament for the Cities of London and Westminster, said: “It is an enormous relief to see the Law Commission finally recommending legislation. Rickshaws have become an absolute menace in the West End.

“In summer, their blaring music disturbs residents well into the night. They cause traffic chaos. And there is little protection for passengers in the event of a crash.”

Speaking about last week’s police operation, he told the Standard that a private member’s bill had been submitted regarding the licensing of pedicabs but so far it had not proved possible to find time to debate it in Parliament.

"I think we are living on borrowed time,” he said. “It has been a frustration; the difficulty is finding parliamentary time linking it to a departmental bill."

Steve McNamara of the Licensed Taxi Drivers’ Association (LTDA), which has long lobbied to have pedicabs banned, told the newspaper:

"Someone is going to get killed in one of them. Unfortunately it is going to take a tragedy to get someone to act."

He went on: "[They] are inherently unsafe. They are flying through Regent's Street at 30mph. By their very nature you can get thrown out of them."

He also claimed that visitors from Middle Eastern countries had been overcharged by pedicab drivers, with one reported to have been charged £200 for a ride between the department stores Selfridges and Harrods, which he said should cost around £10.

"Most Londoners will find it abhorrent that [pedicab drivers] are ripping them off," he added.

Chris Smallwood, speaking on behalf of the London Pedicabs Operators Association, backed the police seizing pedicabs fitted with electric motors, but rejected allegations that the vehicles are inherently unsafe, saying: “The responsible members of the pedicab community comply with safety standards.”

In April 2010, Christopher O’Kane, a soldier on leave, died in Edinburgh after falling from a pedicab in the Festival Square area of the city’s Lothian Road.