road.cc spotted Mavic’s new disc wheels at a recent bike launch and at Eurobike last week the French company unveiled their brand new Aksium One Disc and Ksyrium Pro Disc wheels for 2015. Mavic aren't a company to rush out new products but the growth of road disc brakes has been so rapid it was only a matter of time before they too offered a disc-specific wheelset.

With these two wheelsets, Mavic are catering for both ends of the market. The £175 Aksium One Disc will be a common sight on many bikes we're sure, and we’ve already spotted it being used by the likes of Genesis Bikes on their 2015 disc road bikes, and the £880 Ksyrium Pro Disc wheelset will offer the lightness and stiffness to appeal to top-end builds.

Mavic says they have redesigned the rim, obviously removing the now redundant brake track, and using this as an opportunity to make the rim a bit wider. The trend now is for wider tyres and rims, and it’s good to see Mavic finally paying attention to the desire for wider rims. The hubs are available with either 6 bolt or Shimano’s Centrelock disc rotor mounting standard, providing good compatibility. Inside the hubs are sealed cartridge bearings with 24 straight pull round spokes used in both wheels with brass nipples. Mavic claims a weight of 1,965g for the wheelset (890g front, 1,075g rear).

The front wheel can easily be switched between regular 9mm quick release or 15mm thru-axle, simply by changing the axle end caps. This is proven technology on their mountain bike wheels and ensures good compatibility - the 15mm axle will be compatible with any 15mm thru-axle system currently being used. 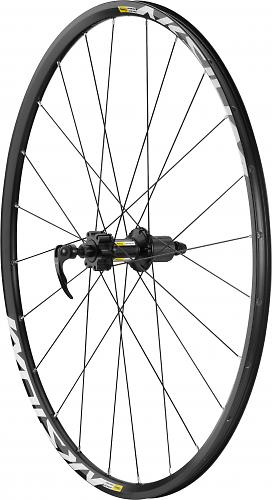 The Aksium One Dis wheelset costs £175 and should be available soon. More details at www.mavic.com/wheels-road-triathlon-aksium-one-disc

Based on the long-running Ksyrium, this new wheelset weighs a claimed 1,535g for just the wheels (680g front 855g rear). Mavic will be selling the wheels with tyres as part of their Wheel Tyre System (WTS) they’ve been doing for a few years now, and they claim a wheel and tyre weight of 2,115g. 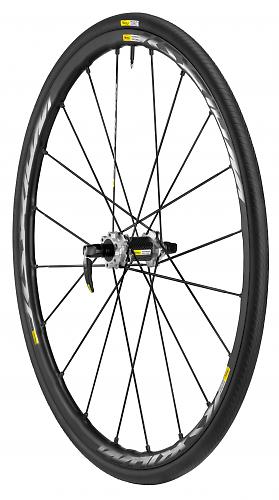 Like the Aksium One Disc, the hubs are available with either 6 bolt or Centrelock disc mounts. The hubs use familiar Ksyrium technology including the carbon front hub shell and full aluminium rear hub shell, with the rims using the company’s ISM 4d technology to remove excess weight between the spokes.