Has Transport for London got it right this time?
by John Stevenson

Cycling campaigners have given a generally favourable reception to Transport for London's draft plans for two new London cycling superhighways that will cross the city from north to south and from east to west.

The plans were opened for public consultation yesterday and comprise a north-south route between King's Cross and the Elephant and Castle, and an east-west route stretching from the western end of Cycle Superhighway 3 at Tower Gateway to the Westway at Royal Oak.

The routes will cross at Blackfriars in what one commentator called "a stonking new bike interchange". It's been a while since anyone from the world of cycling described anything planned by TfL as 'stonking'. 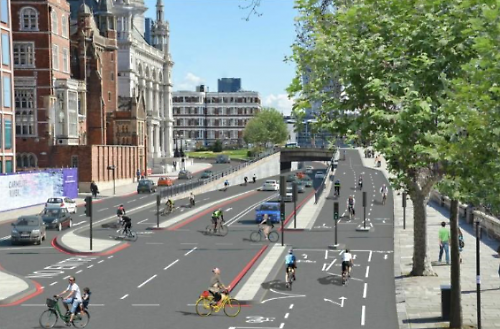 The idea, TfL says, is to encourage people to ride who "currently feel unable to".

In its introduction to the consultation, TfL said:

"Cycling in London has more than doubled in the last decade. Bikes now make up around a quarter of rush hour traffic in central London* - but there are few special routes or facilities for them.

"[They have] been designed to encourage the large numbers of people who would like to cycle, but currently feel unable to."

As well as being largely segregated from motor traffic, the two new routes will have priority at intersections, are intended to be wide enough to allow overtaking and include substantial improvements for pedestrians too.

Individual campaigners and cycling organisations are busy examining the proposals in detail, and many have encouraged riders to take a look for themselves and feed back comments to Transport for London.

On the whole, though, the plans have been hailed as a big step forward.

The London Cycling Campaign said: "The plans show that the Mayor is finally delivering on his commitment the promises he made to LCC’s Love London, Go Dutch campaign.

"While LCC has concerns around some of the details which we will be addressing with Transport for London, overall we’re pleased to see that the scheme provides much more space for cycling, and also gives more space for pedestrians."

Ashok Sinha, Chief Executive of London Cycling Campaign, said: “In 2012 … the Mayor promised them that he would deliver all new cycle superhighways to best continental standards. We congratulate the Mayor on finally taking such a big step towards delivering on this promise.

"LCC’s main concerns are that some of the planned new junctions are not safe enough and that the width of the new cycle tacks is too narrow in places. … Overall, though, LCC is really pleased to see commitments to substantially reallocate carriageway space to ensure protected space for cycling – particularly on the east-west superhighway, where cyclists regularly make up almost half of traffic during the morning peak.

“We’d encourage all our members and supporters who use the routes to feed back on the proposals on the TfL website.”

Transport charity Sustransput its weight behind the plans. Sustrans London Director, German Dector-Vega said: "These are two hugely important developments that will improve Londoners’ quality of life and transport options.

"With this level of quality and ambition, we will all finally be able to use bikes to get from A to B without having to worry about traffic.

"Despite being the London Director of a walking and cycling charity, I'm terrified of cycling on some of London's busiest roads. This will fundamentally transform London to the point where my family and I can ride safely through the centre of our capital. What’s more pedestrians will benefit from improved crossings and extra protection from fast traffic."

Aldred, Senior Lecturer in Transport at the University of Westminster, wrote on her blog: "I think it’s crucial these proposals succeed.

"If these two superhighways go ahead as proposed or better, we’ll have proved on the streets that London can do it. Yes, I know they’re not perfect. And two routes don’t make a network.

"But the hard stuff is not digging up and remaking roads, not in a transport rich city like London. And even elsewhere resources appear if something’s a priority. The hard stuff’s the politics – getting support for change."

Aldred said that she had gone into a meeting about the plans with TfL, in her role as a trustee of London Cycling Campaign, with some trepidation.

"Could they actually be any good?" she wrote.

"Yes, they’re good. Good enough that if you care about cycling, you need to say so.

"We need to be heard. People who don’t want space for cycling will be taking similar action right now."

Williams, a member of London Mayor Boris Johnson's Road Task Force, wrote on his Cyclists in the City blog: "Unlike when the Mayor announced plans for his original Cycle Super Highways, this time they really have the feel of being proper Cycle Highways. They are almost entirely segregated. They have priority over side roads, just the same way that other traffic does.

"There are some impressive new features, such as a bike track through the service tunnel that runs parallel to Upper Thames St (near Cannon Street) and a stonking new bike interchange where the two Cycle Highways will meet at Blackfriars.

"There is a cycle track planned through Parliament Sqaure, and pedestrian crossings so that people can actually access the Square properly for the first time.

"And once you're on the tracks, there is a consistency that means I would - for the first time ever - be able to get my mum on a bike with me in central London. Something I never ever thought would be possible."

Of course, not everyone is happy. The plans will take road space from motor vehicles, and even though this has been demonstrated to reduce congestion by discouraging people from driving, motor organisations are concerned.

Professor Stephen Glaister, director of the RAC Foundation, told the BBC the mayor's plans would cost £100 per Londoner (a sum that seems to be based on the planned spend of £913 million over ten years on cycle facilities) and challenged him to prove that this was value for money.

"It would be a mistake to think London is clogged up with selfish drivers in their cars," he said.

"Much of the traffic is essential freight and commercial movements, not to mention buses and taxis, and if you cut capacity then business costs will rise and deliveries put at risk."

The Freight Transport Association (FTA) also sounded a warning about the importance of access for goods deliveries.

Natalie Chapman, FTA’s head of policy for London said: “FTA supports the development of new cyclist infrastructure which is targeted on improving safety for cyclists, and believes it can provide real benefits.

"But cyclists are only one user of the road and the needs of all must be considered – Londoners depend on the goods our members supply every hour of every day.

"It is important that these schemes are carried out in such a way that does not unduly disrupt traffic flow or prevent kerbside access for deliveries to businesses and homes.”