One of the great things about going to Eurobike, the world's biggest bicycle show, is the chance to see what the colour trends are for 2015. We've had a couple of years of largely all-black 'stealth' road bikes and while black is still the dominant choice, there is a definite backlash as loads of manufacturers revealed brightly painted bikes at the show.

And what colour are they plumping for? Well it looks like a split between blue and orange really. We can't decide which is more popular, but maybe there is room for both? What do you think? Here's a look at some of the coloured bikes of 2015 to give you a taste of what to expect. 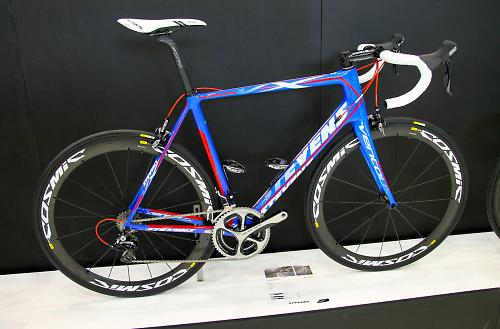 Firmly in the blue camp are Stevens with this smart Ventoux. We reckon they've done a fine job with its, with a nice splash of red and matching white bar tape and saddle. 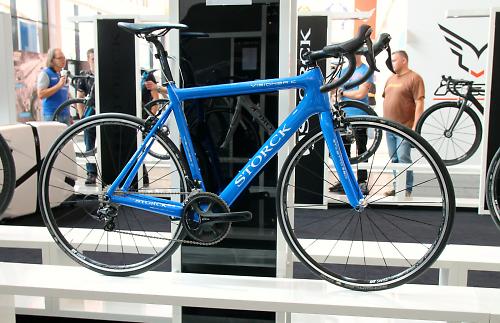 Storck are well known for their monochrome bikes but they're keen to show they have a colourful side, and showed this blue Visioner C on their stand. 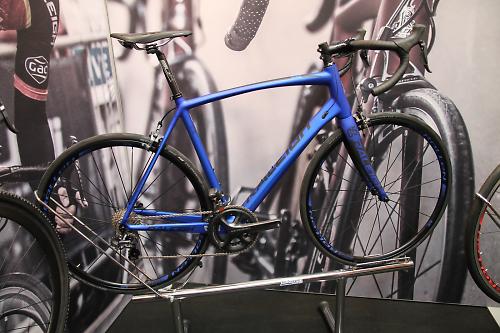 Raleigh also have a couple of nicely coloured bikes for 2015. Here's the Revenio in a dark blue. The black and understated decals work well. 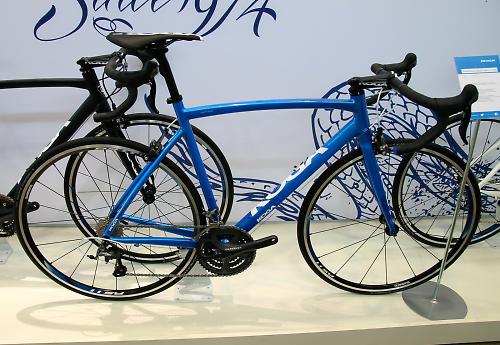 Koga too have a blue bike in their range, and they've opted for a simple white decal on the down tube paired with black bar tape and saddle. 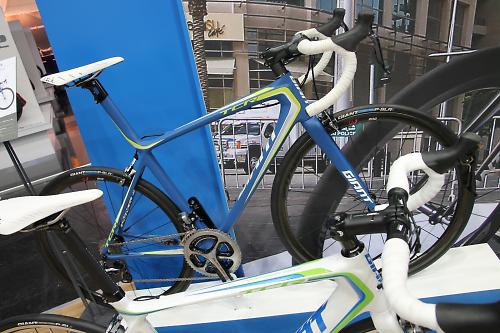 Blue is Giant's corporate colour so you'd expect a fair amount of blue, and this TCR does it nicely with a splash of highlight colours that made it easy to spot on the stand amongst a cluster of bikes. 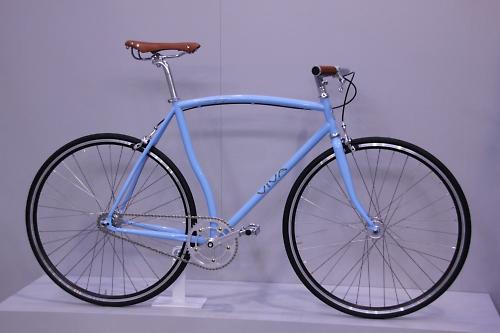 It's not just road bikes that are getting a bit more colour in 2015, here's a curvy fixed wheel example. 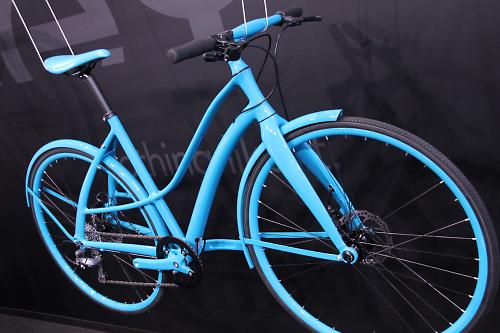 Hybrid bikes were big news at Eurobike, and here's one from Hey Cycle that has gone to town with the blue paint. The mudguards, handlebars, cranks, rims and saddle are all painted the same shade. So blue was clearly popular, but some brands clearly decided orange was the colour trend such as De Rosa with this King XS. Looks absolutely stunning in the flesh and I would have one in a heartbeat. 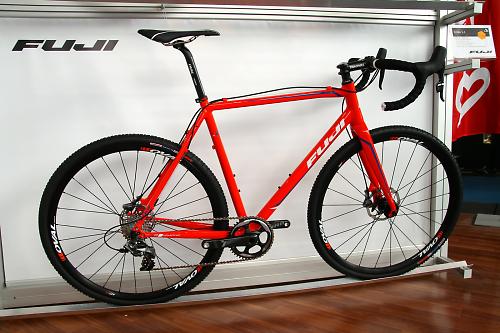 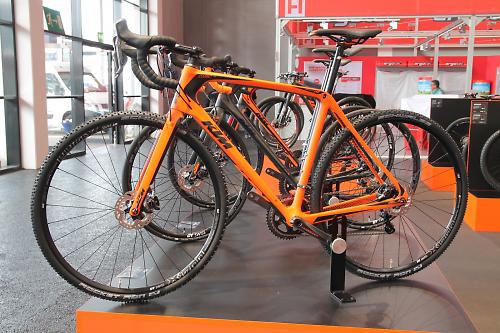 Okay so KTM do a lot of orange 'cos that's there brand colour, but here's their 'cross bike. Works well with enough black to balance it out. Still grabs your eyeballs though. 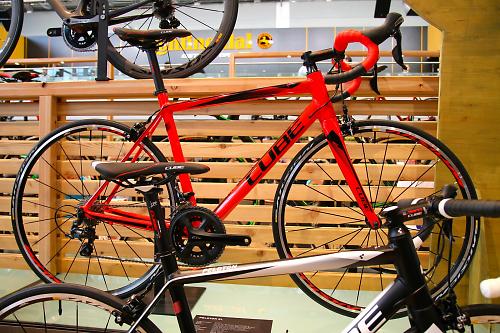 Look hard enough though, and you'll find an orange road bike. Cube are pretty bold when it comes to painting bikes but hidden away on the stand was this orange (but it's a bit more red-orange really) Peloton bike, complete with matching bar tape and Mavic rim decals. Want a matching cyclo-cross bike to go with that road bike? Cube have your back covered. Reckon these two would look good together in the shed/garage/living room. You have to really like the colour though. And what kit are you going to wear with it? It would have to be black everything to avoid clashing. 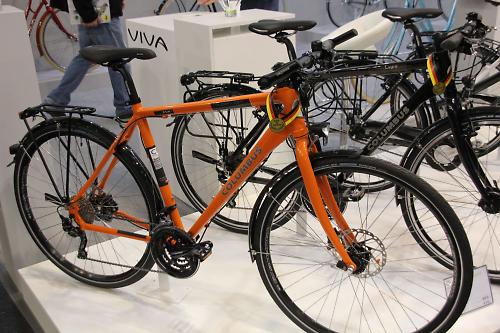 Ticking a load of versatility boxes was this Columbus hybrid with every extra you need for year-round commuting or even some touring. 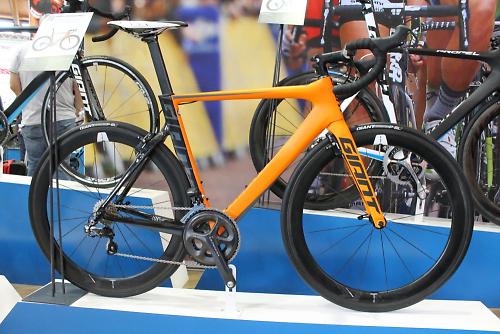 Giant have a foot in each colour trend for 2015, here is a Propel with a half orange colour scheme. And you know what, we reckon it does the trick, it works on the aero shaped frame. 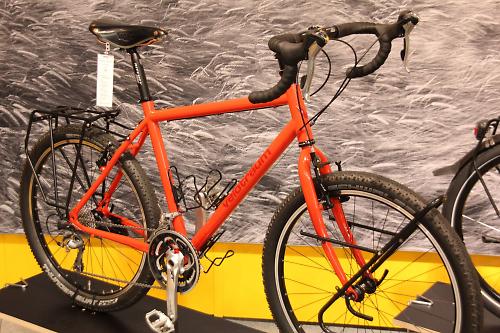 This Velotraum Konzept tourer based on a mountain bike frame with V-brakes, rack mounts and loads of bottle cage mount and Brooks saddle. Ideal for heavy duty touring for sure, but also riding to work, and with those chunky mountain bike tyres you can stray away from the road. 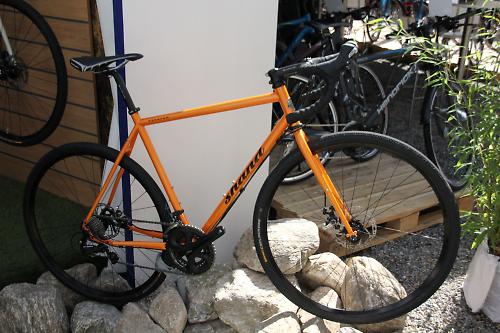 Scottish brand Stoater showed this orange Stoater on the rocks. Mat is currently testing a Rohloff-equipped version of this model, but the same frame can be built up however you want it, this one here has a conventional drivetrain and disc brakes. And clearly not getting the colour trend memo was BMC, who showed this green GranFondo with hydraulic disc brakes. Still, this little lot does show there is plenty of choice if you're want your next road bike to be brightly painted.

1
Rapha collaborates with Robyn Lynch for new collection, including a £450 upcycled jacket
2
Chloe Dygert apology for social media conduct “not sufficient” says Rapha
3
Pregnant cyclist lost baby after hit and run by drunk driver who had previously been spared a ban
4
Corner-cutting motorist who blamed low sun for killing cyclist spared jail
5
Win a Saris H3 Direct Drive Smart Trainer worth £850!
6
Concerns mount after latest wave of attacks on Bristol and Bath Railway Path
7
MP who opposed pop-up cycle lanes tries an e-bike – and has an epiphany (of sorts)
8
Here's what we want to see from the new Shimano Dura-Ace groupset