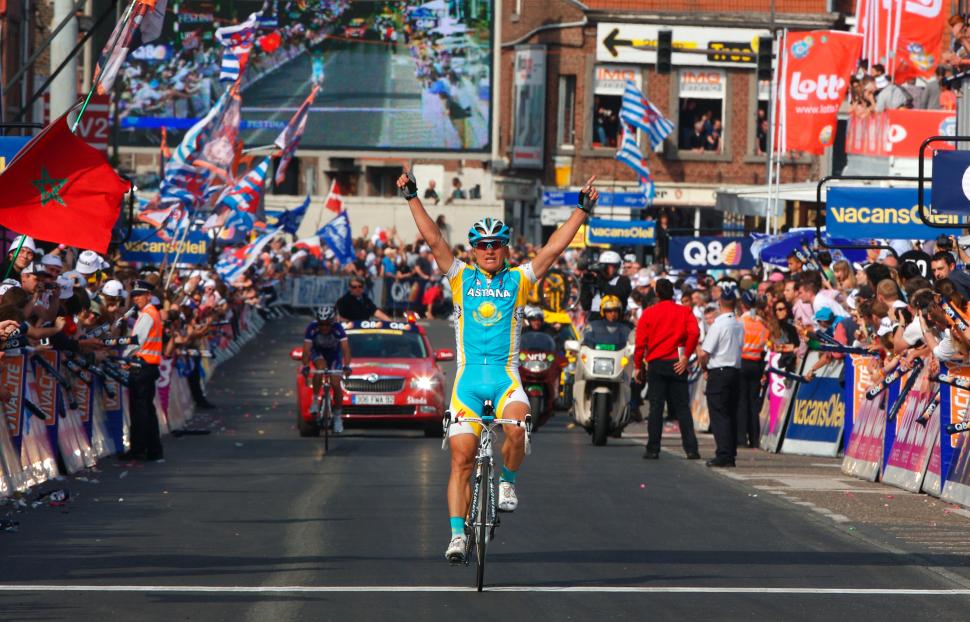 Vinokourov has admitted making payments, but says they were nothing to do with the race
by Simon_MacMichael

Alexandre Vinokourov, winner of Liège-Bastogne-Liège in 2010, and the runner-up in that race, Alexander Kolobnev, may face criminal charges in Belgium for corruption, according to press reports from that country.

Ever since Vinokourov’s victory in the race, the year after he returned from a doping ban, there have been rumours that he did a deal with Kolobnev to rig the result, with Vinokourov, riding for Astana at the time, allegedly agreeing to pay Katusha's Kolobnev €150,000 to take it easy in the final sprint.

Vinokourov, now the Kazakh outfit’s manager, won the race, the oldest of cycling’s five monuments, by six seconds from the Russian.

Sudinfo.be reports that the magistrate investigating the affair, Philippe Richard, decided in May that the pair should be charged with the offence of private corruption, although the website says that the decision has been kept a closely guarded secret.

In November 2012, it emerged that investigators in Italy had identified two payments, one of €50,000, the other of €100,000, going from Vinokourov’s bank account in Monaco to that of Kolobnev in Switzerland. They also discovered an exchange of emails purportedly between Kolobnev and Vinokourov.

According to a report in The Guardian at the time, the former is claimed to have written the day after the race: "Remember well, I had a great chance … I didn't do it for the contract but rather for the situation you found yourself in … if it had been someone else in your place I would have raced for the win, for the glory and the bonuses … now I'm waiting patiently. Take my transfer information and put them somewhere else and erase the email."

The alleged reply from Vinokourov came 12 days later and read: "Hi Kolobok, sorry that I took so long to respond. Don't worry, you did everything right … as far as the agreement goes, don't worry, I'll take care of everything."

Vinokourov, who retired after winning Olympic gold in London in 2012, doesn’t dispute paying the money to Kolobnev – in July 2012, he told journalists he had done so but insisted he had nothing to hide and the payment was a loan, a private matter between the two, and nothing to do with his Liège-Bastogne-Liège win.

World cycling’s governing body, the UCI had earlier launched an investigation but no further action was taken, and in response to those reports in 2012 of the bank transfers, former spokesman Enrico Carpani insisted, “It’s a very old story.”

Sudinfo.be adds that the file is currently making its way through the court system in Liège ahead of potential indictments being brought, a process it says could take several months.