This is Tejay van Garderen’s BMC TeamMachine SLR 01, decked out with a Shimano Dura-Ace Di2 groupset and matching wheels. The US cyclist is Team BMC’s nominated leader at the Tour de France, and at the time of writing, is sitting in 5th place overall. Aa good ride in the mountains could see fighting for a place on the podium. 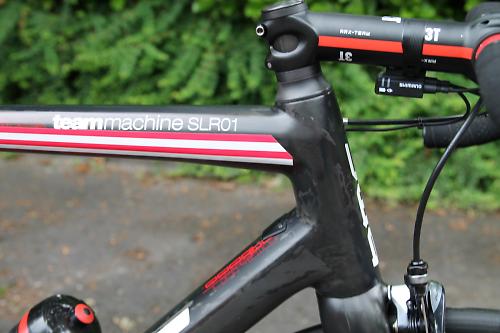 Like the rest of his team, Garderen is riding the BMC's TeamMachine, the Swiss company’s latest flagship race bike, updated last year with a lighter and stiffer frameset. They claim it a 56cm frame weighs just 790g, which is pretty light. Oddly we didn't spot anyone riding the TimeMachine aero road bike the company launched a couple of years ago. Obivously the low weight of the TeamMachine is too much of a draw for the team. 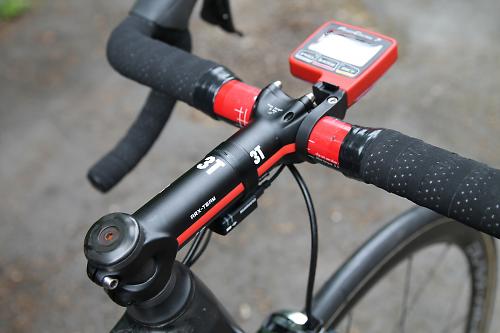 Garderen stands 1.86 m (6ft 1in) and rides a 56cm SLR 01, which might seem a bit small for him. And it probably is: he has his saddle set well back on the 35mm layback seatpost and he’s bang on-trend with a stretched out 140mm -17 degree rise stem. 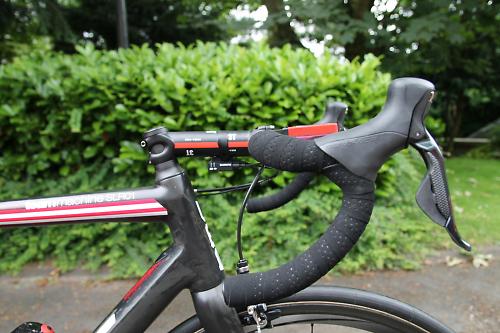 He has his hoods set alarmingly high up the handlebars with a large headset spacer. We reckon he could get the same position with a zero rise stem and losing the spacer and rotating his hoods to a horizontal position. But who are we to advise a pro on their bike setup.

He uses 175cm crank arms as well, which is right for his height. The team are supplied with parts from the 3T company. Garderen prefers the Ergosum handlebar in a 42cm width. 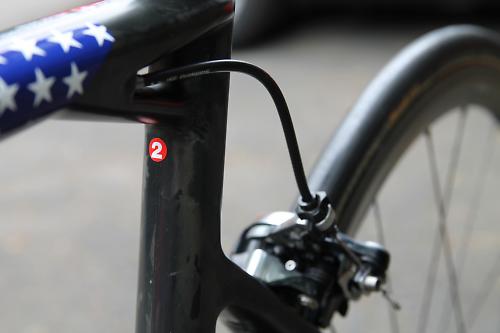 That number tells us this is second spare bike. Each rider has several spare bikes, all team leaders have three bikes each, one on top of each team car, so they’re covered in case of any mechanical issue. 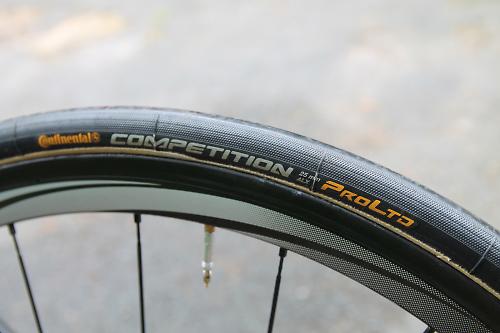 Along with the Dura-Ace Di2 groupset, with an SRM Powermeter and 11-28 cassette, the team also use Shimano wheels. When we photographed the bike it had a pair of C35 carbon tubulars with 25mm Continental Competition Pro Ltd tyres glued in place. The team truck was full of C50 and C24 wheels though, so the riders have plenty of options. 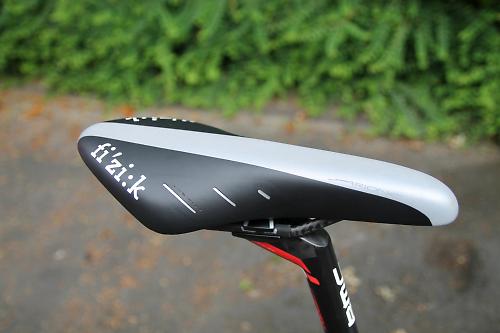 Oddly, Garderen sits on a Fizik Arione TT saddle, a more deeply padded version of the regular Arione saddle. We presume he prefers the extra comfort it offers. It’s also one of Fizik’s fancy new reflective saddles, they were being fitted to all the team bikes just a few days before the race started. 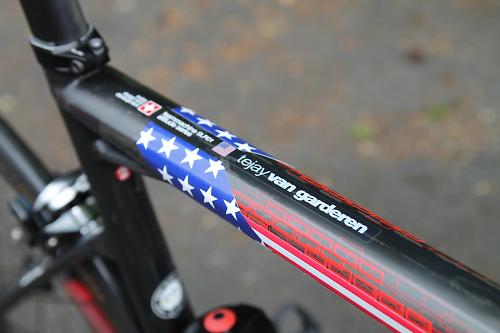 When we visited the team hotel before the Tour set off, the mechanics were busy applying national flag and name stickers to the top tube of each bike. Certainly makes the bikes a bit easier to spot in the peloton.

A lighter and stiffer frame

The main focus of the updated frame was to bring the weight down and closer to the lightest frames in the peloton. They managed that, with a claimed 790g frame weight for a size 56cm. To give an idea of how much weight BMC have shed, the old TeamMachine weighed in at 960g, so that’s a substantial saving. 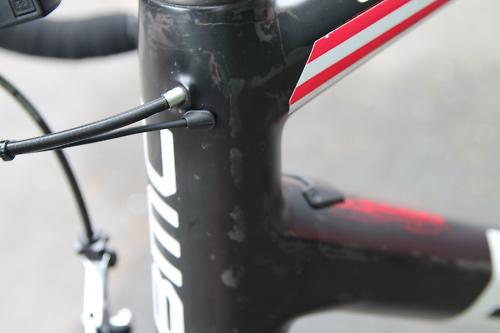 Stiffness has been maintained while the frame has gone on a crash diet. A BB86 Shimano Press-Fit bottom bracket and oversized 1-1/8in to 1-1/4in tapered head tube has allowed BMC touse an absolutely enormous down tube. 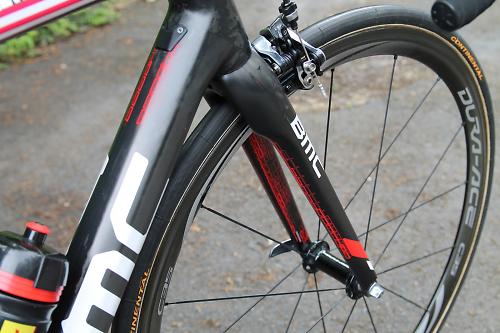 A new fork and seat stays are enhanced with BMC’s Tuned Compliance Concept , also used in the seatpost. The idea is to introduce compliance by decreasing the size of the tube profiles and modifying the carbon fibre layup. 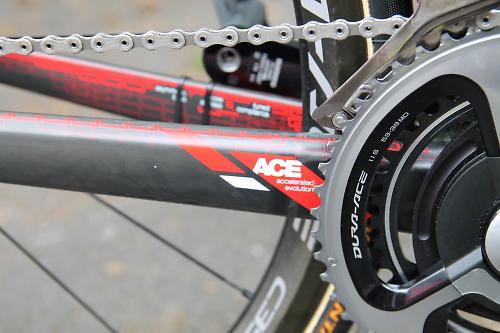 You can read more about the TeamMachine SLR 01 in our review here.