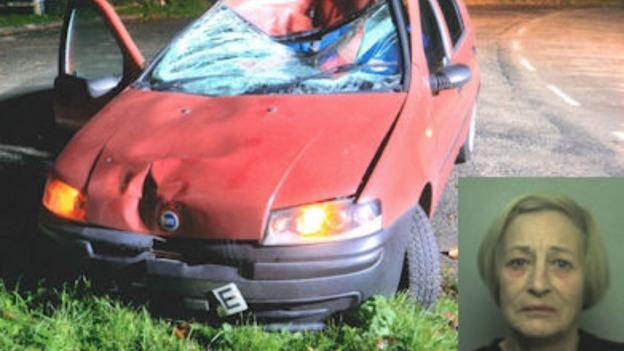 Drunk driver who killed cyclist sentenced to 7 years in jail

A drunk driver who killed a Sussex cyclist and continued to drive for five miles in her damaged car has been jailed for seven years.

Alison Bowen, aged 61, told police that she believed her Fiat Punto, the front end of which was badly damaged, had struck a badger.

After the collision that killed Paul Novak on the A21 at Robertsbridge in November last year, she carried on driving and then crashed on Marley Lane in Battle.

She pleaded guilty at Lewes Crown Court to causing death by driving without due care and attention while over the prescribed limit, and was sentenced to seven years’ imprisonment.

Bowen was also banned from driving for two years, and will have to take an extended retest before she can get her driving licence back.

The victim’s mother, Ann Novak, said: "My only son Paul had his life snuffed out in seconds through no fault of his own.

"No sentence will ever be enough to take away the pain I feel that I will not get the chance to spend the rest of my life with him.

"I still cannot come to terms with the fact that Paul is no longer with us. I have been given great support by my family, friends and the police but nothing can prepare you for the death of your child and nothing takes away the sorrow.

"Paul was more relaxed and happy than he had been for years when he was taken from us. I feel robbed that I won't get to enjoy this phase of his life with him - all because of the selfish actions of Alison Bowen.

She added: "I would like to take this opportunity to thank all those that stopped at the scene of the crash and tried to help Paul. Thank you to the medical staff that did everything they could to try and save his life.”

According to police collision investigators, Bowen was driving partly on the grass verge of the A21 when she struck Mr Novak from behind at around 4.30pm on of 18 November 2013.

Her knuckles were cut by the shattered windscreen of her car rubbing against her hand as she drove on after the fatal collision, though she told police that she had heard “a bonk” and believed she had struck a badger.

A breathalyser test found that she was more than twice over the drink-drive limit, with 85 microgrammes of alcohol per 100 millilitres.

Sergeant Dan Pitcher of Sussex Police said: "Paul Novak was the innocent victim of a woman who selfishly decided to drink and then drive home.

"He had no chance to avoid Bowen or to do anything that could have saved him from her.

"Bowen was so drunk when she struck Mr Novak that she did not even know what she had done.

"After the collision she must have been able to see next to nothing out of her windscreen as the front of her car was smashed to pieces but she continued on the roads and could have easily caused more serious or even fatal accidents.

"This horrific case shows exactly why we cannot and will not tolerate any drink or drug driving in Sussex.

"There is no such thing as an acceptable amount that you can drink before driving. One drink is one drink too many, as the family of Mr Novak will testify to."

1
Owner of van with spiked wing mirror claims it is to deter vandals, not harm cyclists
2
Highway Code changes aimed at protecting cyclists to become law next month
3
Car wing mirrors studded with spikes reported to Greater Manchester Police
4
Richard Dawkins claims “psycho” cyclist smashed up his Tesla – while he was in it
5
Cyclist shot by hunter who says he mistook him for a rabbit
6
Reaction as Transport for London pauses See their Side ad campaign following backlash
7
Rural A roads are where cyclists are most likely to be killed, road.cc analysis reveals
8
Twin brothers in court charged with murder of charity cyclist in Scotland