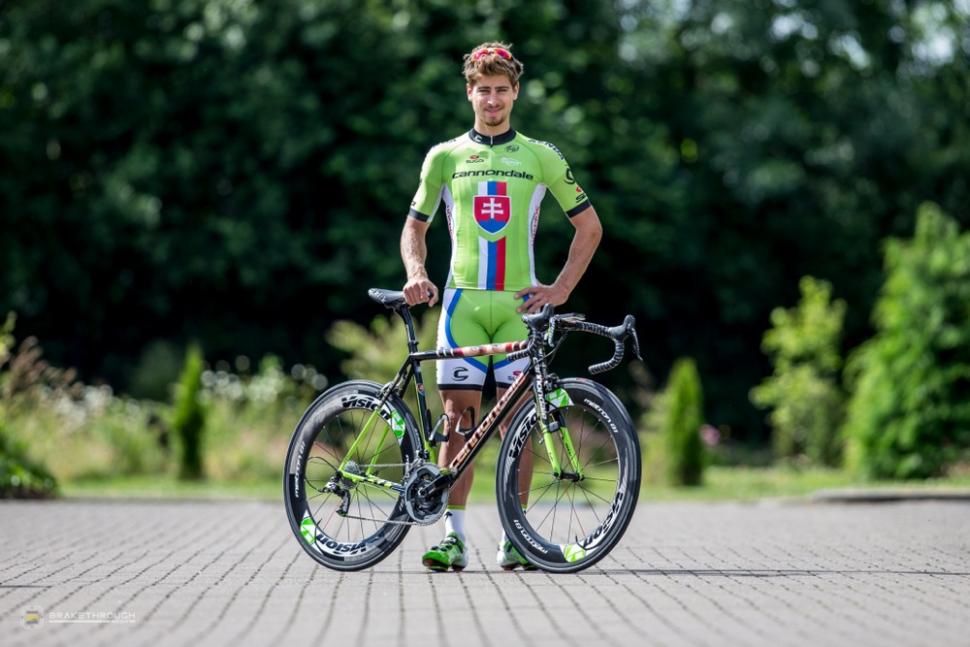 Sagan has been the Tour de France’s Mr Consistency so far this year. With seven stages down, he has three second place finishes to his name, three fourths and a fifth. Although Sagan isn’t an out-and-out sprinter like Marcel Kittel or André Griepel, he is way out in front in the Green Jersey competition. He has also had the White Jersey for best young rider since the end of Stage One (he's 24 years old), and currently sits third in the General Classification. This is the bike he has been riding most of the time. 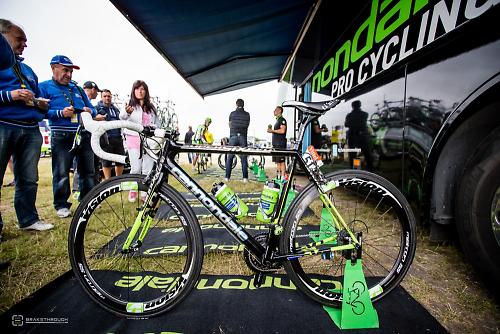 Sagan’s main bike is a Cannondale SuperSix Evo Hi-Mod. As the name suggests, it’s made from high-modulus carbon fibre, and it comes with an oversized BB30 bottom bracket (Cannondale came up with the BB30 design and then allowed other manufacturers to use it). The head tube is tapered, taking a 1 1/8in bearing at the top and a 1 1/4in bearing at the bottom for extra front end stiffness. The headline feature of the SuperSix Evo Hi-Mod frame is its weight. Cannondale reckon that it’s 695g in a size large, making it the lightest production frame in the world when it was launched (although now Trek claim that their newly launched Émonda is a smidge lighter). 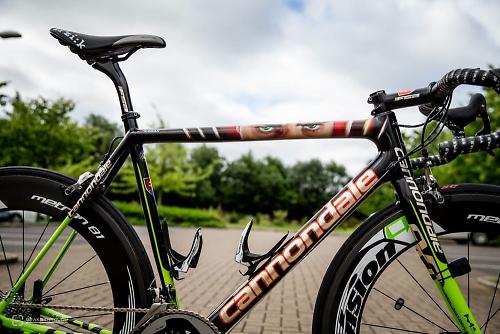 Cannondale also say that the SuperSix Evo Hi-Mod frame is extremely stiff (142.3Nm/deg.kg, if you want the figure), claiming that it has the highest stiffness-to-weight ever recorded.

The seatstays and chainstays are designed to flex a little bit (this will happen to some extent on all bikes) to improve speed and handling by allowing the rear wheel to track the ground, and to add comfort. The fork is designed to provide a degree of compliance too.

The SuperSix Evo Hi-Mod couldn’t be described as an aero road bike but the frontal area is smaller than that of many rivals.

“Tests show that Evo has a mere 14g more drag than the best ‘aero’ frames without their added weight and harsh ride,” according to Cannondale.

Peter Sagan doesn’t ride a stock size frame. The Evo is made up of four individual monocoque pieces: the head/down/top tubes, the bottom bracket/seat tubes, and the two chainstay/dropout/seatstay assemblies. Sagan, who is 184cm tall (just a touch over 6ft) has a 54cm seat tube section joined to a 58cm top tube section. The idea, of course, is to get a low and stretched ride position for improved aerodynamics. The rider, as opposed to the bike and other equipment, is responsible the vast majority of all the drag working against you on a bike, hence Sagan’s desire for a ride position that’s as efficient as possible. 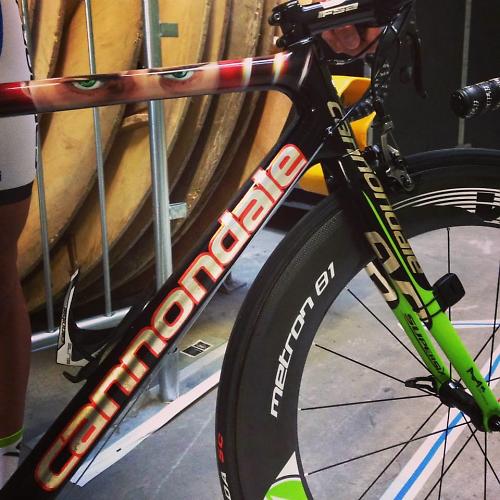 All of the Cannondale Pro Cycling Team SuperSix Evo Hi-Mod bikes have been given personalised paint jobs for the Tour de France by Death Spray. They’re animal-related, Sagan’s being a Wolverine design. He has a similar design on his Rudy Project helmet. 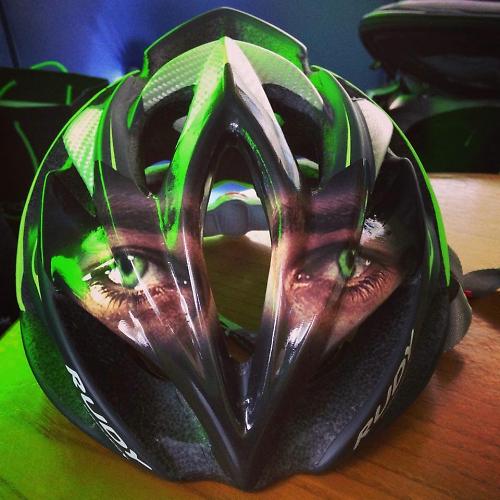 The SuperSix Evo Hi-Mod comes with external cable routing because Cannondale reckon they can make a lighter bike that way. That’s very unusual in a World Tour level bike these days, and something that must make the team’s mechanics happy. Sagan’s bike is built up with a SRAM’s top-level Red groupset with white hoods on the shifters rather than the usual black. The chainset is Cannondale’s own with an integral SRM power meter and 53/39-tooth chainrings.

The riders change their wheels according to the stage. As you can see, in some of these pictures Sagan has Vision Metron 55s fitted, in others it’s Metron 81s, those figures referring to the rim depth in millimetres. Metron is Vision’s most aero wheel lineup with full carbon rims, aero spokes, and sealed ceramic cartridge bearings. Vision give a weight of 1,400g for the 55s and 1,460g for the 81s. Those are Kenda SC tyres. That’s an FSA K-Force seatpost with a new reflective Fizik Aliante saddle. Fizik have just launched those saddles, providing them to each of their seven teams in the Tour de France.

GCN had a quick look at Sagan's SuperSix Evo Hi-Mod earlier in the year:

Like the rest of Cannondale Pro Cycling, Sagan rode a Cannondale Synapse over the cobbles on Stage Five. Check out that bike in the roundup of pavé bikes that we published on Wednesday.