We’ve already had a look at one bike that’s likely to feature in the shakedown for stage 1 honours: Mark Cavendish’s Specialized Venge. And here’s another, the Giant Propel of Team Giant Shimano’s Marcel Kittel. That’s assuming Kittel makes it to the line: he’s on record as thinking that the narrow, dry-stone-walled roads of Yorkshire will be “very dangerous” for the peloton. But assuming he doesn’t end up pulverising himself along the way, this is the bike he’ll be sprinting for glory on, a team issue Giant Propel Advanced SL. Cav has his fancy green Venge and Greipel has his gorillas (although we also saw bikes of his with the standard retro Lotto-Belisol pain job) but Kittel will be sticking to the team colours, it seems. The very helpful Giant-Shimano mechanic insisted that we shoot this one, which is his first-choice bike, rather than a spare, and went to the trouble of getting it down from the team car for us where it was already sat waiting to go to the team presentation. Nice man. 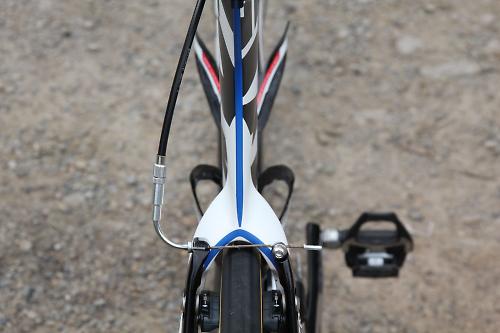 The Propel being Giant’s aero bike they make the usual this-many-seconds-over-this-much-road claims for it over its aero bike competitiors, the numbers in this case being 12-36 seconds over 40km at 40kph. Which will be helpful next time we ride 40km in an hour. This being a Shimano team the bike is kitted out with a full Dura Ace Di2 groupset with an SRM powercrank replacing the stock chainset. Kittel uses sprint buttons for easy changes in the thick of the dash for the line, located on the inside of the STI levers. It’s normal to see a beefy stem on a sprinter’s bike, and this is no exception. Sprinters put a huge amount of stress through the front of the bike and they need components that are up to the job. Kittel is using PRO’s Vibe Sprint, a full carbon stem that’s noticeably wider than a standard stem for “ultimate rigidity”, according to the PRO website. PRO suggest you use it with the Vibe Sprint handlebar for best results, but Kittel has it paired with a standard Vibe 7s alloy bar in a classic bend. 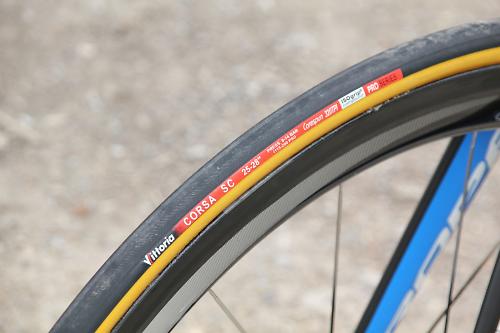 Like most of the team bikes we saw on our rounds, Kittel is using 25mm tyres on his Propel, Vittoria Corsa SC tubulars in this case. Every team we saw was mostly on 25mm (or 24mm) tyres this year and riders choosing narrower widths (Valverde, for example, who runs 22mm tubs) are very much the exception rather than the rule. 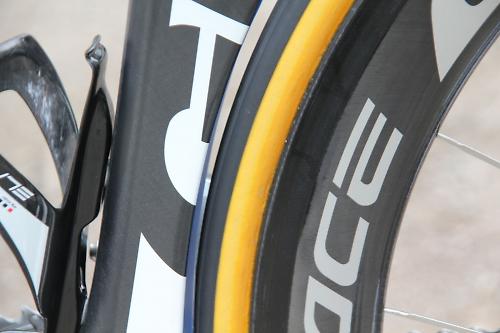 Given the amount of space available at the back of the Propel, 25mm is as big as you’d want to go… At 1.89m and 85kg Kittel is about as big as pro riders get. This is a big frame (a L rather than an XL, we think, it wasn’t stickered), but the German still has to shove his saddle as far back in the rails as it will go to get the position he wants. That being said, it’s by no means an extreme riding position compared to some of the other bikes we’ve seen. Kittel uses a stock Turnix saddle from PRO.